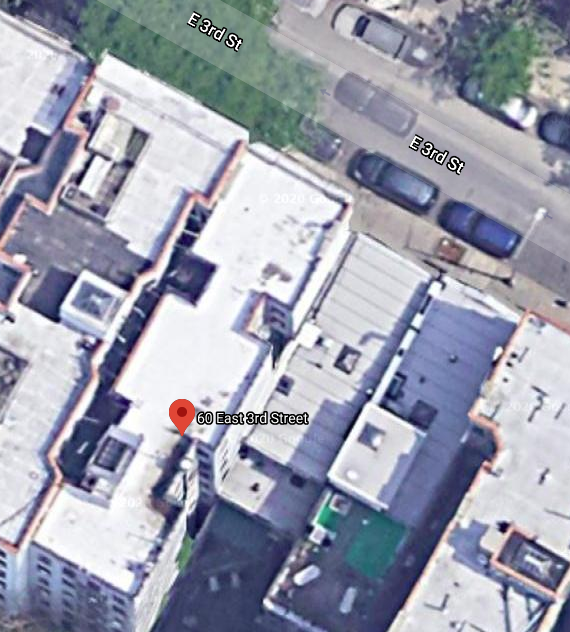 A woman fell off the roof of 60 E. Third St. into an airshaft, just to the left of the building in photo above, but survived. (Google Maps)

BY LINCOLN ANDERSON | A witness to the horrific fall of a 23-year-old woman from an East Village rooftop early Saturday morning confirmed that the victim plunged 60 feet to the bottom of an air shaft that is paved in concrete.

The terrifying accident — in which the woman miraculously survived — was first reported by The Village Sun. However, the details initially were murky.

Rob Burke, who lives on the sixth floor of 58 E. Third St., between First and Second Aves., has a window on the 6-foot-wide air shaft. On Sunday, he shared with the newspaper what he saw and heard on that fateful night.

He said while his own building has several rooftop party decks and 4-foot-high walls ringing its rooftop — which were recently installed by a new landlord — the building from which the woman fell, 60 E. Third St., has a very low wall around its rooftop that is especially low along the edge of the air shaft.

“It’s got a very low parapet that’s in some places only 18 inches high,” he said. “It’s tempting to sit on it. You can go backwards, which is probably what happened. Somebody could easily just bump you and you could go over.”

Burke said he had been eating dinner and watching TV with his wife earlier that night, around 9 or 10 p.m., when he heard a party up on the roof.

He wasn’t sure whether it was on his rooftop or atop the building on the other side of the air shaft, so he went up to his roof to take a look. A longtime construction worker in his 60s, when he tells youthful partiers on his own rooftop to pipe down, they comply.

In this case, he saw that the group was on the neighboring rooftop. They were mostly young women and, as he tells it, were having a birthday party.

“They were kind of making noise,” he said, though adding it wasn’t too bad. “They looked pretty innocent. They were probably college age, 18 to 20s.

“I even heard them say, ‘Turn down the music.’ I felt they were very considerate young people — not like a bunch of guys having a beer blast. They had a table, paper [on it]. They were being neat. Pretty innocent.”

In the end, Burke decided not to say anything to the revelers and went back down to his apartment.

However, he noted that later, “It did get a little louder and you start to smell marijuana. They’re getting drunk.”

He eventually fell asleep sometime after midnight. According to police, the woman fell about 10 minutes before 1 a.m.

“I must have dozed off for a few minutes, and then I heard commotion,” he said. “I remember saying to Lisa, ‘I think someone fell off the roof.’ And then it got kind of quiet over there across the way.”

Poking his head out his window, Burke saw the woman lying on her back at the bottom of the air shaft. She was motionless and unresponsive with her face up. She had medium-length blonde hair.

“I was looking down,” he said, “I thought, ‘She looks pretty strong, if she had been pretty petite… .'”

The woman fell through chickenwire netting that had been stretched across the top of the air shaft to keep pigeons out, but could not even hold a cat’s weight, he said. That jibes with what a police spokesperson had told The Village Sun — that the victim, “apparently intoxicated, fell from a six-story rooftop after stepping over netting.”

If that’s the case, then she she was not sitting on the low parapet wall before the tragic accident.

However, Burke said, it’s inconceivable to him that anyone could mistake the mesh covering the top of the air shaft for a solid surface.

Burke said about 20 firefighters arrived nearly instantaneously and worked deftly to extricate the gravely injured woman from the tight shaft.

“The Fire Department are heroes,” he said. “The sensitivity, the delicacy with which they picked her up.”

The smoke eaters gently placed a collar around the woman’s neck to stabilize her and put her onto a board. They then had to trickily maneuver and lift the board up some stairs to get out of the air shaft, after first having removed the door to the shaft. They went out through Burke’s building because the passage was wider there than at 60 E. Third St.

Burke said his building’s Trinidadian super, Sheldon, has a basement apartment, with a window right on the air shaft, and was shocked awake at the sound of the woman crashing to the ground right outside his place.

“He went down there and saw her face to face,” Burke said. “He said she was bleeding from the mouth, the ears and the nose.”

Some of the woman’s friends rushed down to where the woman was lying, as well.

Burke said he went down the next morning and looked at where the victim landed and the concrete was broken in that spot.

“I think she hit a weak spot in the concrete,” he said.

Maybe that could have helped cushion her fall, even if only a little bit, he speculated.

Burke said there really was nothing that could have broken the victim’s fall on the way down, since there are no ledges or air conditioners in that part of the shaft, which, again, is only 6 feet wide.

“All she could have done is bounce off the walls, to take a little friction to reduce the impact,” he guessed.

“This is unusual,” he said. “They don’t usually go up there. Sometimes you see a person standing up there or exercising.

“I imagine the landlord is going to have a nice big lawsuit for not having the door locked,” he noted. “There’s no railing up there where she was. Nothing, [the wall’s] knee-high.”

Another danger on rooftops is that parapet walls on century-old East Village buildings can also simply give way, the veteran construction worker noted.

The police report merely listed the woman in “stable condition,” probably because she was simply alive and not likely to die.

Burke said he’s relieved that she survived, but he’s sure she’ll have a long road to recovery.

He now feels terrible and is second-guessing himself for not saying something to the young women celebrating the birthday party.

“If you think kids are going to get into trouble, you have a responsibility,” he said.

“Everybody likes roof parties, it’s a New York tradition,” he said. But he added, “Alcohol and drugs and a roof are a fatal combination. The city should prevent kids from having parties on roofs.”