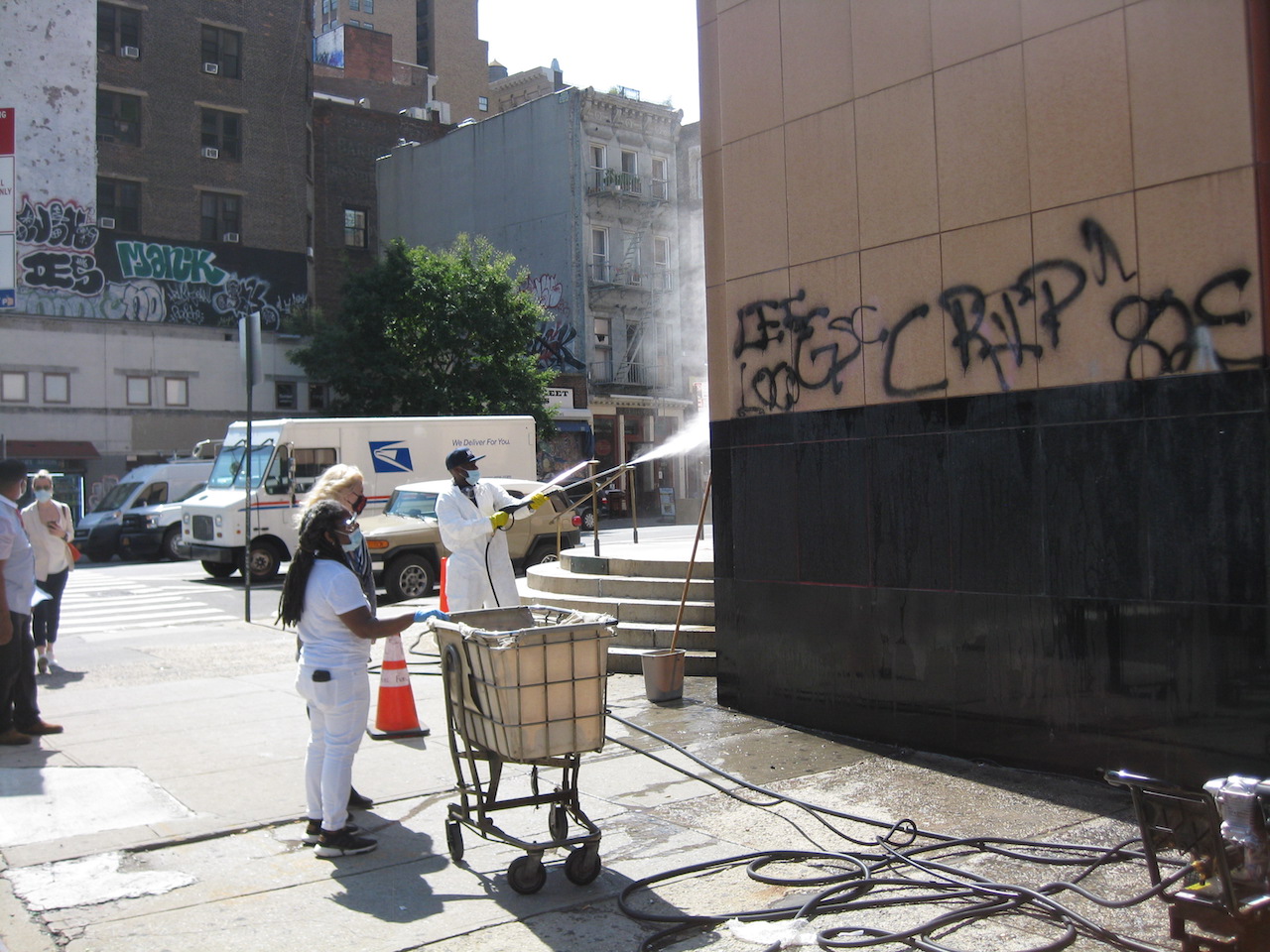 A postal worker power-washed graffiti off the Canal St. station on Tuesday. (Photo by Bill Dobbs)

BY THE VILLAGE SUN | It turns out the post office can be fixed, after all!

Well…at least the Canal St. station can be.

Just two days after The Village Sun reported that the historic Tribeca post office had been totally bombarded with a massive amount of graffiti, workers were on the scene, cleaning off the slew of offending scrawls.

Soho activist Bill Dobbs, who initially notified the newspaper of the sorry scene, also made 30 phone calls about the problem. The combination of Dobbs’s doggedness and media coverage seem to have gotten results.

On Tuesday, a solo U.S. Postal Service worker was seen working on cleaning up the graffiti. The next day, the crew grew to three to four workers — with more staffers from inside the station also joining in to help.

Dobbs has been swinging by the site each day on his bicycle to check out how the graffiti-removal is progressing.

He’s a bit concerned, though, about whether all of the markings can actually be removed. Like the Washington Square Arch, where “ghosts” of recently cleaned-off graffiti currently can still be seen, it seems that parts of the post office’s exterior may have absorbed some of the paint.

The black lower border of the building’s exterior is fine, and cleans up well, but the tan part above that is actually terra-cotta panels, Dobbs noted.

“So it’s not coming off very well,” he said of the persistent paint. “The graffiti’s lost some of its punch, but it’s still visible.”

Over all, though, he said, “The place is looking much better.”

As of late Tuesday, there was still a 50-foot-long stretch of 4-foot high letters along the building’s Canal St. side left to be tackled. But Dobbs said word was the workers would be back Wednesday to attack it.

In general, the Soho activist is not a graffiti fan. He recently went by Chambers and Centre Sts. to check out how the plaza there has been cleaned up after the Occupy City Hall encampment was cleared out. Literally every single inch of the space had been festooned with graffiti and artwork, but now it’s all spick and span, he said.

But Dobbs was irked to see that one spot had been missed — a city map in a kiosk had not been wiped clear and was still sporting graffiti. So he did the job himself.

Regarding, the Canal St. station, he said, he doesn’t necessarily necessarily get a kick from seeing it cleaned, but there were larger political ramifications.

“I don’t get anything off [cleaning] the post office,” he said. “In this case, it gave me this ominous feeling that Trump had killed the post office.”