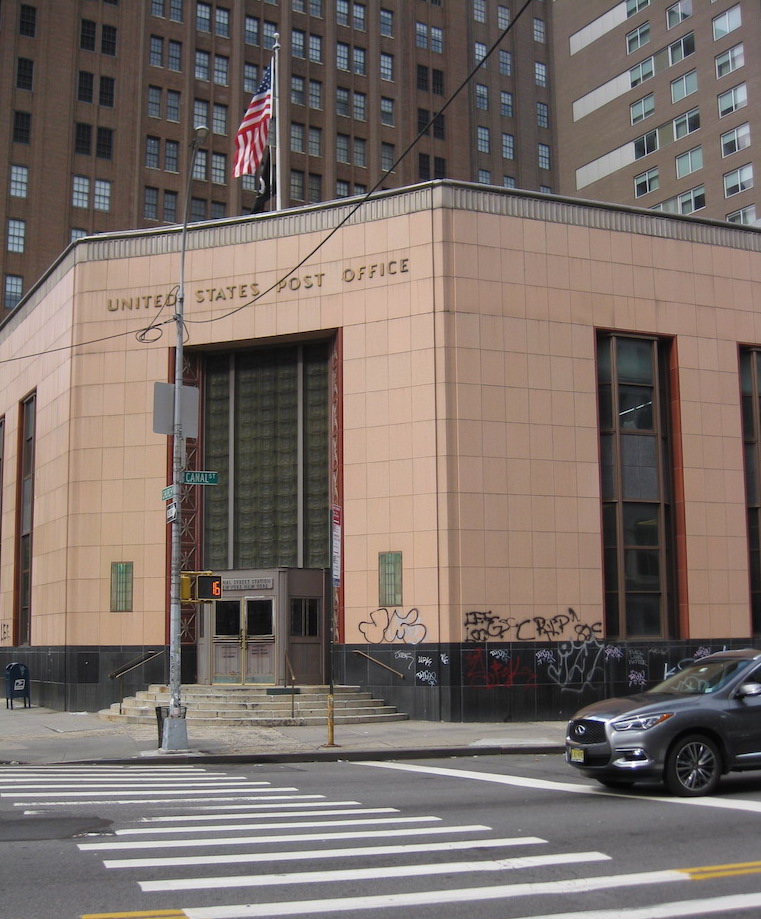 The Canal St. post office is festooned with graffiti. (Photo by William Dobbs)

While the U.S. Postal Service is under attack by the Trump White House, here in Manhattan the historic Canal St. station is under siege. Graffiti is taking over the outside of the building, making the post office in this highly visible location seem forlorn and abandoned.

Soho activist Bill Dobbs, who shot these photos, talked to clerks inside about the situation but, so far, there’s been no response.

“What appears to be spray paint has been up for weeks now and I fear that the passage of time may make it even harder to remove from the exterior glazed tiles that likely date to the construction of the building in the 1930s,” Dobbs said. “No doubt, replacing those tiles to landmark standards would be a costly and challenging undertaking.”

On the building’s Canal St. side, one giant graffito visible from a block away has defiled the Moderne-style structure. Now smaller defacements are spreading along Canal St., and also on the southeast corner of the building.

“Let’s hope the U.S.P.S. or another agency will take quick action and commit to quickly removing any further graffiti,” Dobbs said, “and the Canal St. station can continue to shine far into the future.”

Originally known as “Station B,” the post office, at 350 Canal St., at the corner Church St., in Tribeca, was listed in 1989 on the National Register of Historic Places in Manhattan. It is not an individual New York City landmark, however, nor is it part of any of Tribeca’s four historic districts.

In some cases, officials at other agencies are waiting for things to calm down a bit more before they do a full graffiti cleaning. For example, the Parks Department is delaying until the fall to clean “graffiti ghosts” — faint traces of mostly removed graffiti — that are still visible on the Washington Square Arch from the recent wave of vandalism.