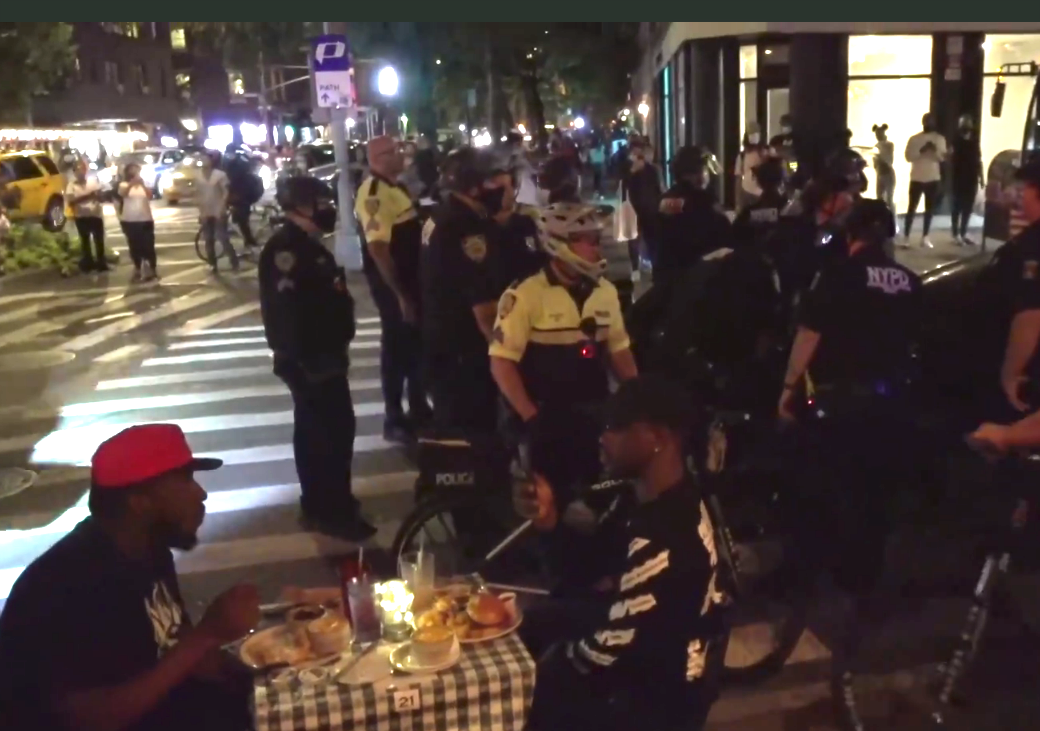 Police arrest 12 outside Cowgirl after protesters ‘tried to enter precinct’

BY THE VILLAGE SUN | Police didn’t take kindly to protesters reportedly trying to enter the Sixth Precinct on Saturday evening.

Cops cracked down on a large group of demonstrators after they allegedly tried but failed to enter the W. 10th St. stationhouse, then blocked traffic nearby, according to police. The standoff finally ended with police aggressively moving in and making a dozen arrests outside the Cowgirl Hall of Fame, to the shock of outdoor diners eating there.

Video of part of the chaotic incident shows, around 8:20 p.m., a large force of police, including bicycle police, swarm the protesters on the west side of Hudson St. at W. 10th St., handcuffing some of them. Meanwhile, stunned diners at outdoor tables at Cowgirl are seen standing and videoing the arrests — though at least one of them just continues eating nonchalantly while his dinner partner videos the mayhem.

A police spokesperson said the chain of events had started unfolding earlier that evening in Washington Square Park over loud music.

He said police had received “numerous noise complaints from area residents in the vicinity of Washington Square Park. After multiple [police] warnings regarding loud music went unaddressed, officers gave one of the individuals playing music a summons.”

According to an article in the New York Post, the music in Washington Square was amplified. The police spokesperson said he could not confirm that, but noted that amplified music — not acoustic music — is generally what gets a summons.

“Following that, a group of 150 demonstrators attempted to enter the Sixth Precinct stationhouse,” the spokesperson said, “but were stopped by security on the block of the precinct, at which point they blocked traffic on Hudson St. Multiple warnings were issued to clear the sidewalk at that location, at which point the officers took 12 individuals into custody.”

Blocking a street and blocking a sidewalk are both disorderly conduct violations, the spokesperson noted.

Eight of the protesters — three males and five females — were issued summonses at the Sixth Precinct for disorderly conduct in lieu of being arrested.

There were four arrests.

Louis DeJesus, 37, of Brooklyn, was charged with assaulting a police officer, resisting arrest, obstruction of governmental administration and “pedestrian on roadway.”

Les Flagler, 27, of Queens, was charged with resisting arrest and “pedestrian on roadway.”

David Ortiz, 28, of Queens, was charged with obstruction of governmental administration, an unspecified “local law infraction” violation and “pedestrian on roadway.”

Anna Quezada, 20, of Harrison, N.Y., in Westchester, was charged with obstruction of governmental administration.

Flagler, Ortiz and Quezada were issued desk-appearance tickets. DeJesus, due to his more serious charge, was due to be arraigned before a judge.

The Post said the demonstrators marched down to the Sixth Precinct to “protest police busting up what they said had been a peaceful, art-driven rally in Washington Square Park, complete with a DJ playing music.

“ ‘There was a DJ there but there is always music in Washington Square Park. It wasn’t louder than it usually is,’ ” one protester told the tabloid.

However, The Village Sun reported last week on a crackdown on amplified music in the park after a two-week period that saw amped-up tunes get out of control, according to neighbors. Generally, a permit is needed for amplified music above a certain volume.

Ever since the start of the George Floyd protests, police have been on high alert about guarding their precincts. In July, though, Stuart Zamsky, an E. Fifth St. merchant, wrote an op-ed in The Village Sun saying the barricading of the block by the Ninth Precinct was both killing business and sending the wrong message.

The Daily News said Saturday night’s park event was a protest over the lack of police indictments in the fatal shooting of Breonna Taylor in Louisville, and that people were dancing to deal with their anger and grief. The News said DeJesus tried to bite a cop after grabbing a police bike and not letting go. The paper quoted Cowgirl owner Sue Williams saying the police arrests cost the Western-themed eatery “at least thousands of dollars in business.”

Following the arrests outside Cowgirl, State Senator Brad Hoylman and Assemblymember Deborah Glick issued a joint statement condemning what they called a “disturbing escalation of force” against peaceful protesters by police.

“Last night, bystanders and protesters in our districts in Greenwich Village were charged and pushed to the ground in a disturbing escalation of force by N.Y.P.D. officers, which was unwarranted and unacceptable,” they said. “The melee also appears to have cost local struggling businesses many customers, including the Cowgirl restaurant, at a time when they can least afford it.

“Unfortunately, peaceful demonstrators have experienced these escalations of force by N.Y.P.D. numerous times this year since protests began after the murders of George Floyd and Breonna Taylor,” they said. “As a result, the current fragile trust in law enforcement seems to be weakening by the day, which is dangerous to our constituents and all New Yorkers.”

The two pols, who both live in the Village, further demanded that Mayor de Blasio “strongly condemn” the actions by police in the Cowgirl arrests and take action to prevent similar occurrences by “forcing accountability for officers who violate the public trust, including with terminations; releasing the names of all commanding officers and N.Y.P.D. personnel who approved the deployments involved in the escalation at Hudson St. and W. 10th St. last night; releasing the Department of Investigation and the Law Department’s report into the violent policing of protests, which was supposed to be released on Aug. 31; supporting moving final disciplinary authority to the Civilian Complaint Review Board; and supporting passage of S7527/A10560 (Myrie/Richardson) to repeal Chapter 834 of the laws of 1940, which limits the ability of localities across the state, including New York City, to provide independent oversight of police.”