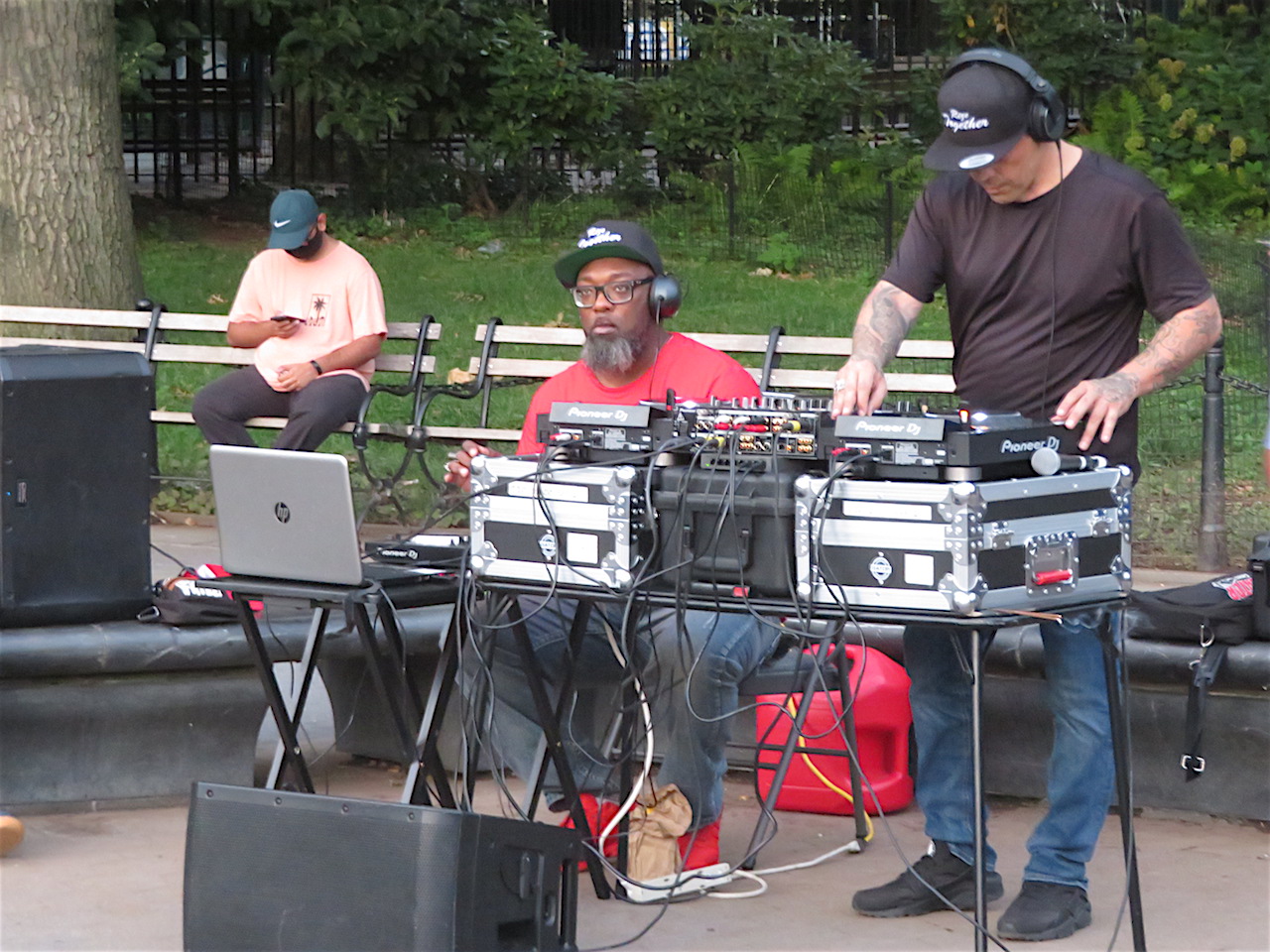 Deejays were rocking out on full-on amplifiers in Washington Square Park in recent weeks. (Photo by Everynight Charley Crespo)

Parks Dept. cracks down on amps in Washington Square, but skateboards slide

BY THE VILLAGE SUN | Call it Operation Unplugged.

After two weeks of seriously amped-up music in Washington Square Park, the Parks Department is clamping down.

Sunday night around 10:45 a knot of about 10 Parks Enforcement Patrol officers were standing in the dark on a path inside the park near the Thompson St. entrance.

The place was fairly empty save for some youth circling the fountain plaza on skateboards and electric scooters, or gratingly clacking their skateboards while doing tricks, while others hung out listening to amplified music at a low volume or sat scattered around on benches.

Asked if the PEP officers were, in general, doing any enforcement on skateboarding in the park, which is technically not allowed, one of them told The Village Sun that it’s not their main focus right now.

He said the officers currently are mainly keeping an eye on amplified music, along with social distancing and mask wearing.

The amplified music had been very loud the previous two weeks and Parks had gotten complaints about it, he acknowledged. As a result, the number of PEPs in the park was beefed up. Things have been quieter lately, he said, “because we’re here.”

Everynight Charley Crespo — who covers music Downtown, including in the parks, for The Village Sun and who is a lifelong East Villager — said when he was in Washington Square a week or so ago, the park was the loudest he had ever heard it.

Meanwhile, on the northern side of the park on Sunday night, more than half a dozen police stood guarding the Washington Square Arch. Four more cops were stationed on the park’s eastern side, a pair each at two entrances there.

Asked why so many police were detailed to the park Sunday night, one of the officers posted on Washington Square East said he wasn’t sure but to call the Police Department’s press office. A press spokesperson said he didn’t have an immediate answer.

However, protests in New York City recently have ratcheted up yet again, this time over accusations that ICE detainees in Georgia underwent hysterectomies without their consent.

As for skateboarding, some locals complain that it has “taken over the park,” predating the pandemic. A sign is posted just to the east of the Washington Square Arch telling people to dismount from skateboards, bikes and scooters, but no one follows it. However, it probably at least does make everyone slow down.