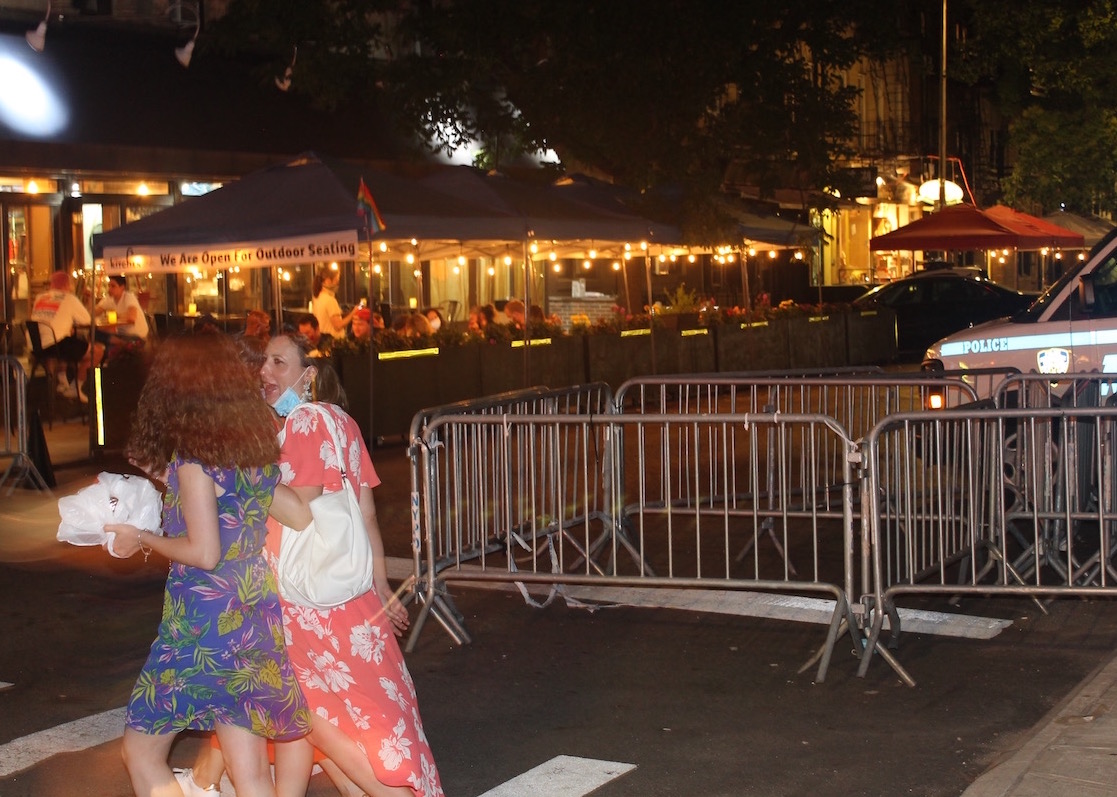 Pedestrians walk past the police barricades at E. Fifth St. and Second Ave. on the block of the Ninth Precinct. (Photo by The Village Sun)

BY STUART ZAMSKY | As with many New Yorkers, it is with pride that I regard the current movement across America shedding light on police brutality and demanding change to the system and the attitudes police bring to policing.

The protests and actions have been raucous and sometimes disrespectful and even out of hand. But as one looks back to other substantive movements that have helped change the nature of American life, such as the suffragette, civil rights and anti-Vietnam War movements, to name a few, they too were not neat and tidy. Democracy and freedom is messy and unruly and can be very uncomfortable.

Unfortunately, I cannot look with the same pride at my hometown New York Police Department. The movement’s purpose was to shine a light on the police. That light showed, at best, a ham-handedness and, at worst, impulsive violence and/or calculated actions that fomented violence and ill will.

As I stood on Second Ave. on the evening of June 1 watching the first of the protests go by, I noted the barricade that was up at E. Fifth St. and the line of heavily clad police behind it. And as I watched what seemed to be just a few outliers of the protest breaking windows of local businesses (a bakery, a restaurant, B&H Dairy, the bus stop, etc.), it was curious that the police stayed put.

As much as I fully supported the movement, it was obvious that there was an element simply looking to destroy, to break glass, or set a trash fire in the street. A restaurant directly across from the barricade was damaged.

And, while I was thankful that there was no violence, I couldn’t help wonder why the police were completely flat-footed. Would they not raise a hand to rescue these businesses that are the heart of my East Village neighborhood? The answer was a resounding “no.”

In the few days to come there would be a 180-degree turnaround. Squad cars were speeding the length of the island, and police would close ranks on large groups of peaceful protesters, resulting in bitter and often violent clashes, the results of which can readily be seen in video collected by citizens. (The New York Times recently published a collection of 64 videos of unwarranted police violence, and it should be noted that that is only what was caught on camera.)

The barricades on the precinct blocks stayed up throughout the city (and are still there today), and were manned by at least two cops on either end of the block. A police car was used as a gate at the entrance of the block and people and vehicles were checked to see if they were either residents or had business on the street.

I’ve had a business on the same block of E. Fifth St. as the Ninth Precinct for 25 years, and do not remember anything like this, even when the city was attacked by terrorists on 9/11.

The action seemed to me to speak volumes and directly to the nature of the protests; While the protesters were calling for a demilitarization of the police, the police doubled down and created a military-style “Checkpoint Charlie.”

The fact that the protest movement was nonviolent, and calls from local politicians cited the illegality of such barricades did nothing to dissuade them. And, when asked for the reasoning behind the decision, the captain of the Ninth Precinct said that credible (unpublished) threats were being made against the precinct, businesses, residents and officers on the block, that police officers’ personal vehicles were vandalized, and that security cameras had caught people taking pictures of buildings and vehicles on the block.

One could address (and find solutions) to deal with all of these problems, such as posting a single officer to cover the private police parking lot. And some of the justifications cited simply seem unfounded or overblown. (I don’t know of any business on my block that’s been threatened, and see people taking photos of buildings regularly. They are often insurance or real estate people.)

During the course of this civil unrest, the police have had a chance to show their true colors, to act with restraint and listen to what the people are telling them. Instead they have seemed only able to act one way or the other, with no in-between. They are tone deaf, reacting to calls for demilitarization with military action. Barricaded precinct blocks send the wrong message. The “us against them” attitude broadcast by these 24/7 lockdowns harnesses a systemic fear of citizenry to justify unacceptable aggression.

Meanwhile, merchants and residents on these blocks are having a hard enough time trying to survive. We should not be interrogated in order to gain entry to our homes and places of business. If police have ongoing concerns about the safety of their station houses, couldn’t they limit the enclosures to the precinct buildings themselves?

Local policing is a chance for our city and the Police Department alike to understand calls for demilitarizing and defunding in a positive way, creating not acrimony but cooperation and goodwill. The N.Y.P.D. should end these shows of force that no longer make sense. They should not be disrupting entire blocks with military tactics as our city continues to suffer, and to heal.

Zamsky is owner of antique shop White Trash, at 304 E. Fifth St., and an officer of the E. Fifth St. Block Association.