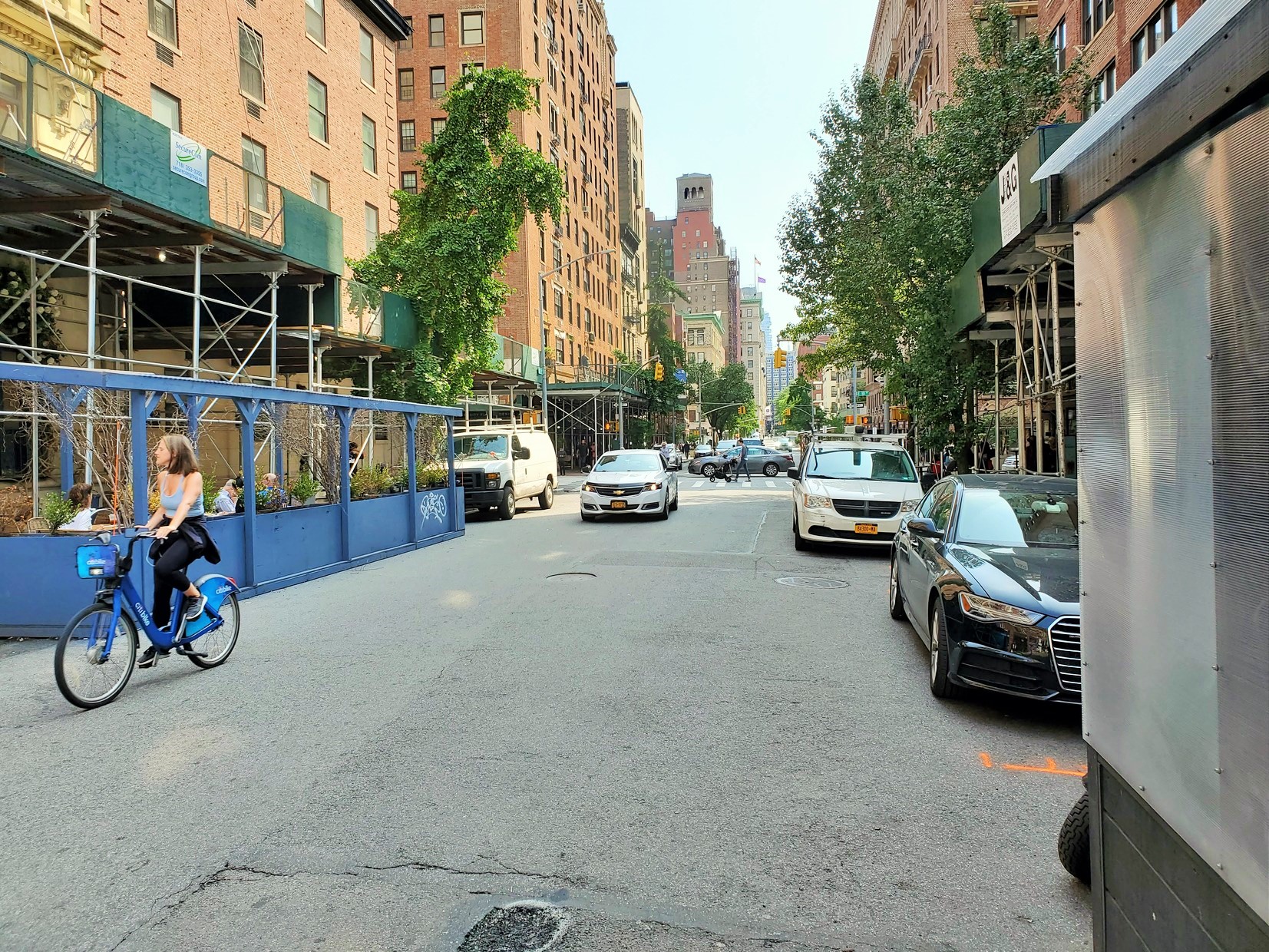 University Place has a low volume of car traffic but local residents fear it will become a noisy party street if it's turned into a bike boulevard. (Photo by The Village Sun)

BY AUSTIN CELESTIN | New York’s favorite pandemic pastime has returned with winter in the rearview mirror. The popular Open Streets initiative has forever transformed how we utilize our streets. Despite some controversy regarding the unequal quality of the program, at its best, it yielded amazing results. However, Open Streets is only a temporary fix. It is not active year-round, prompting activists to call for permanent iterations of the program.

Last spring, the New York Department of Transportation considered implementing a permanent bike boulevard along University Place. There was no final, concrete plan to transform the seven blocks between Waverly Place and 14th Street. However, the general idea was to turn University Place into a pedestrian street centered with a two-way bike lane to accommodate the astronomical surge in bike usage. But just as quickly as the plan to reimagine University Place appeared, the city pulled the plug, indefinitely suspending the imagination program. While D.O.T. indicated this was merely a delay to get the specifics hashed out, no developments have come from this plan in the subsequent months. While the city’s interest in this initiative might have ebbed, the need for this plan persists, and it is imperative that D.O.T. revives this plan and commits to reimagining this street.

This is not the first time this proposal has entered the realm of debate. In 2019, Community Board 2 called for a similar proposal in response to the city installing a shared street between 13th and 14th Streets. An op-ed from March 2021 also proposed an extension of that shared street. When D.O.T. started considering this project, community members and activists were already clamoring for something like this. Local demand was never an issue.

You only have to visit University Place once to visualize this demand and see how nonsensical the current setup is. On any given day, foot traffic vastly outnumbers vehicular traffic. Less than a quarter of area residents own a car. That figure does not include the tens of thousands of people comprising the almost-exclusively car-free New York University community. The proportion of car owners to pedestrians surrounding University Place (and the entirety of Greenwich Village) overwhelmingly leans toward pedestrians, but our streets do not reflect that. Students and residents travel in dense streams along narrow sidewalks while the asphalt remains bare and exposed, and the vast majority of cars there are parked.

That should be reason enough to move forward with pedestrianizing University Place, but there are still more justifications for moving forward with this. There are no bike lanes on University Place. Only a year removed from the deadliest year for traffic violence in recent memory, lacking proper infrastructure for alternative modes of transportation is asinine. The foundation for a reimagined boulevard is already there. Deliveristas regularly flock up and down University Place. Alongside those deliversitas are students who use bikes, skateboards or scooters to get to and from classes. Citi Bikes are also very prominent on the block. Recently, a new Citi Bike rack was installed on Washington Square East to complement the one outside the Washington Mews. There is also the large rack at 13th Street and University Place and a handful of others nearby. There is no reason not to reconfigure University Place to accommodate these alternative modes of transportation.

There are still more reasons to go forward with such a proposal. One can invoke the climatological reasons for reducing car usage and couple it with the research showing that removing car lanes reduces congestion. While University Place is a tiny stretch of road, even an incremental step is a step worth taking. Furthermore, based on a Portland, Oregon, study, accommodating alternative modes of transportation does not hurt the revenue of small businesses, as pedestrians and cyclists spend just as much, if not more, at local establishments than car owners do. A pedestrianized street would be a boon for local businesses. This initiative is a no-brainer.

But what about noise? That is an objection brought up as a potential drawback to something like this. A livelier street is likely, since its current use is predominantly idle cars. Noise, however, barely counters the multitude of benefits a plan like this would bring. The objector also specifically referenced N.Y.U. students as a culprit of this noise, implying that they would be the main beneficiaries of this project. College students are boisterous, and, yes, they would benefit from more green space. They are also an integral part of the neighborhood, one of the reasons Greenwich Village is so pleasant in the first place. With an undergraduate student population equal in size to the population of the entire neighborhood, N.Y.U. provides a substantial clientele to local businesses. Implementing a plan that prioritizes students’ well-being would not be the most unreasonable thing in the world since it would have residual economic benefits for the neighborhood. But this initiative was not designed for N.Y.U. students. It is for everyone. Residents, businesses, visitors and students alike will all reap the benefits of a reimagined University Place.

The shared street served as a model for better streets. Open Streets has demonstrated that it deserves a permanent spot in our urban fabric. A permanent, expansive car-free zone here is the next logical step. The application might be small, but it is a step worth taking. A University Place greenway could catalyze more ambitious initiatives throughout the city. University Place connects to Union Square West, which turns into Broadway. Over the past decade, Broadway has seen some popular but piecemeal pedestrianization projects. A greenway here in Greenwich Village could finally galvanize the city into removing cars from Broadway in Midtown or even the entirety of Broadway. We have an opportunity to reimagine our streets for everyone. We must take it.

Celestin is a sophomore at New York University studying urban design and journalism, and a member of Open New York