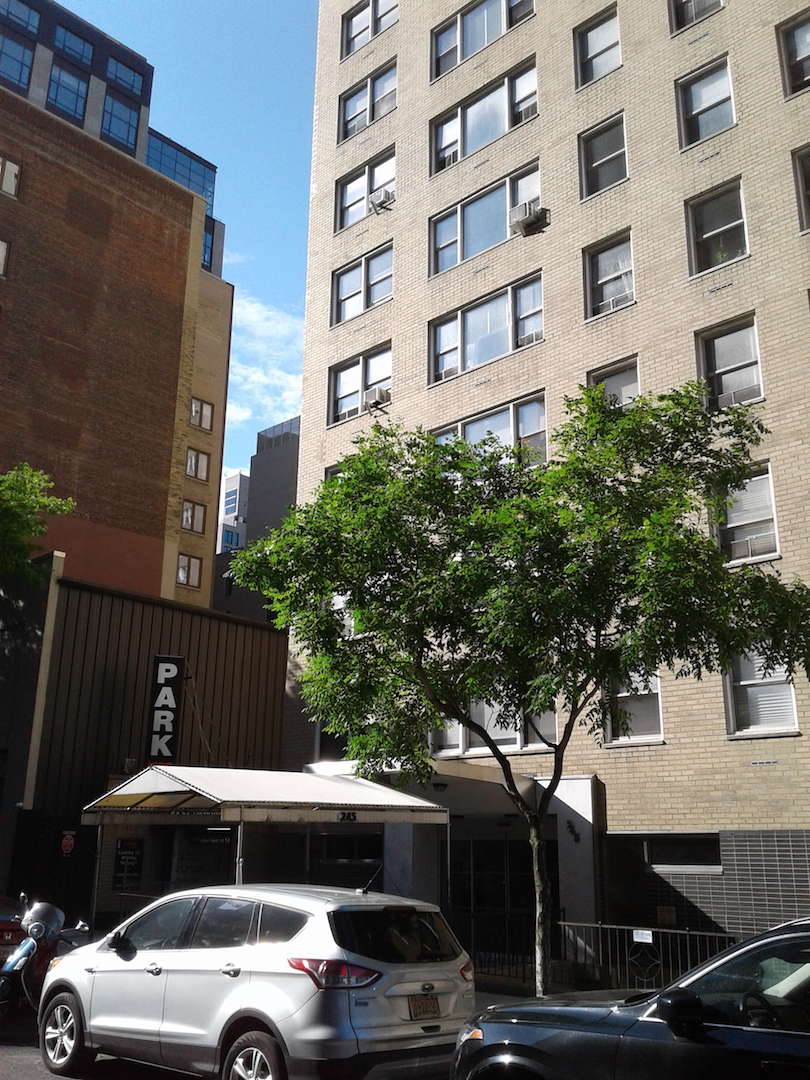 Susan Feterman lived at 245 E. 19th St. She never left the building without her bicycle. (The Village Sun)

That’s because she never went outside without her bicycle.

“She never walked,” recalled Dan, a maintenance man at her Gramercy building.

“I’ve been here 20 years, I never saw her without the bike.”

Almost always trailing right behind it was a supermarket shopping cart, attached to the bike with a towel and bungee cord.

Whenever Feterman ventured outside, it was for shopping, he and two other staffers at her building, 245 E. 19th St., said.

All wearing face masks, the three staffers — including the super — were gathered around the front-lobby desk when The Village Sun stopped by late on the afternoon of Fri., May 29.

Feterman was killed on the morning of Tues., May 5, when she was riding her trusty two-wheeler on E. 14th St. near First Ave. It was just six-and-a-half blocks from her home.

According to a police report, it was around 10:18 a.m. and the senior cyclist was pedaling across the street, from north to south, when a Cadillac SUV heading eastbound reversed into a parking space and struck her.

Feterman was taken to Bellevue Hospital, where she was pronounced dead. The 33-year-old SUV driver remained at the scene.

One could guess Feterman maybe was going to Trader Joe’s for shopping — since the new East Village TJ’s is on that block and that side of the street — but no one knows for sure. However, Dan said he had noticed that, unusual for her, she didn’t have the shopping cart hooked up to her bike that day when she headed out of the building for the last time.

Maybe, though, she was going to buy just a few items, which she planned to carry on the bike’s front rack.

But a lot is not known about Feterman, who, according to the building staff, was a private person.

Although police duly issued a notice that a 72-year-old female cyclist had been killed by an SUV at E. 14th St. and First Ave., they refused to release her name — at least not to The Village Sun. This was per a New York Police Department policy of first notifying a dead person’s family before publicly releasing his or her identity. It wasn’t that police did not know who Feterman was — she apparently had ID on her at the time of her death — but they simply were unable to track down any family members.

However, Gersh Kuntzman, the editor of Streetsblog, provided The Village Sun with Feterman’s name and address, which he said he was able to obtain from the police.

The three building staffers only gave their first names. Ralph, the super, said he has worked there 47 years and that Feterman was already living there when he started.

Feterman lived on the second floor, in a one-bedroom apartment with a terrace, on the building’s northern side, overlooking E. 20th St.

The sprawling 20-story high-rise sits across Second Ave. from Augustus St. Gaudens Playground. It’s a rental with 265 apartments. Ralph figured she must have had a rent-controlled unit since she was there so long.

Arnold, a doorman, said Feterman was quiet and kept to herself. They said she didn’t chat with building employees.

“I never see her talking to nobody,” Ralph added.

They knew she worked from home on her computer.

“I think she used to sell stuff on eBay, all kinds of stuff,” Dan said.

Although the building has a ramp leading right into the lobby, Feterman stubbornly would lug her bike up and down the front entrance’s three steps.

Dan said he suspected she was “a little OCD,” which might explain her refusal to use the ramp.

He said he helped her whenever she was going in or out with her bike.

“I was always afraid she would fall down the stairs,” he said. “The bike weighed more than she did. She struggled with it.”

Asked how her bike’s weight compared to a CitiBike, which is 45 pounds, he said, “Twice that — it was heavy.”

Asked if the bike had any brand name on it, they said no.

It was “too old” to have a name anymore, said Ralph, the super.

No memorial notice for Feterman, with her photo, was posted inside 245 E. 19th St.

As for what happened to the green bicycle, who knows? Dan and Ralph said it wasn’t returned to the building.

Did some passerby maybe take it, or the police? Was it stripped of its wheels and seat, its aged frame forlornly left to rust on the curb along E. 14th St.?

In a quiet life about which not much was known, it’s another mystery.