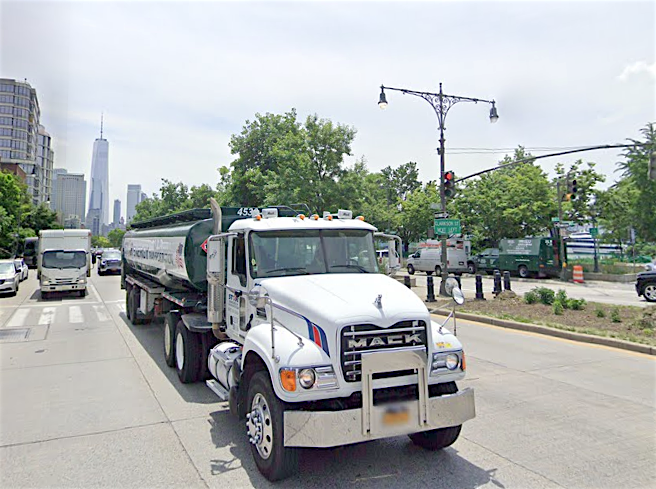 Mablen Jones, who lived in Hudson Square, was killed by a pickup truck on the West Side Highway. (Google Street View)

BY LINCOLN ANDERSON | A 78-year-old Hudson Square author and photographer was struck and killed by a full-size pickup truck as she was crossing West Street at Canal Street on Wednesday afternoon, police said.

Police responding to a 911 call arrived at the scene around 2:40 p.m. They found Mablen Jones of nearby 99 Vandam Street, unconscious and lying on the ground, with body trauma. An E.M.S. ambulance transported her to Lenox Hill Hospital on the Upper East Side, where she was pronounced dead.

According to the investigation so far by the Police Department’s Collision Investigation Squad, a 2017 Toyota Tundra, operated by a 70-year-old male driver, was stopped at a traffic light in the right lane of Downtown-bound West Street (West Side Highway), just north of the westbound Canal Street intersection.

When the traffic signal turned green, the truck began to travel south, striking and running over Jones, who was trying to cross West Street from west to east, in a part of the roadway with no crosswalks or pedestrian signals. The driver remained at the scene and was not arrested.

A police spokesperson, asked if it was known what Jones was doing before she was killed — such as possibly walking in Hudson Square Park — said she did not immediately have information on that, and that the investigation was ongoing.

Jones lived on the top floor of an old seven-story, graffiti-covered residential loft building at the northeast corner of Vandam and Greenwich Streets across from the U.P.S. Lower Manhattan depot. The building is full of long-term tenants, artisans and craftspersons, many who resided there since the 1970s.

Reached Thursday, Hazin said he had just heard about Jones’s death but did not know more about her personally. He said he would reach out to someone who knew Jones for more information.

Jones formerly taught at Parsons School of Design. She authored and co-authored a number of books in the 1970s and 1980s, including two about clothes, “Taking Care of Clothes: An Owner’s Manual for Care, Repair, and Spot Removal” and “Getting It on: The Clothing of Rock ’n’ Roll,” plus “Doing Art Together: The Remarkable Parent-Child Workshop of the Metropolitan Museum of Art,” co-authored with Muriel Silberstein-Storfer, and “The Great Sundial Cutout Book,” co-authored with Robert Adzema.

A September 1985 article by The New York Times featuring a guide to the tables at the Fifth Avenue Book Fair listed Jones and Silbertstein-Storfer as sharing a table to promote their book on the Met’s parent-child arts workshops.

A Publisher’s Weekly review in October 1987 of “Getting It on: The Clothing of Rock ‘n’ Roll” was a bit snarky.

The review noted that Jones posited of rock stars’ garb that the “harshly contrasting dual or multicolor schemes descend from the medieval fools and Elizabethan clowns who wore two-toned costumes to symbolize the rational versus irrational division of the mind. Other revelations are less profound: Ozzy Osbourne’s 15-pound vermicelli-beaded nylon-chiffon robe (depicted here among the 125 color and black-and-white pictures) is washable.”