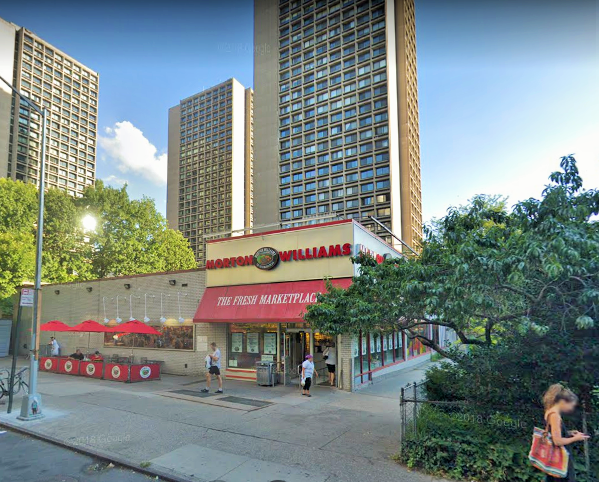 A public school is now planned on the site of the current Morton Williams supermarket at Bleecker Street and LaGuardia Place. (Google Street View)

During the planning process a decade ago for its megadevelopment scheme for its two South Village superblocks, New York University verbally assured there would be a supermarket in the mix. Scoping documents mentioned a supermarket. But now the question is whether those documents represent a legally binding commitment.

Now, as The Village Sun first reported, the city’s recently announced plan to build a public school on the site of the Morton Williams store at Bleecker Street and LaGuardia Place potentially could leave Greenwich Village without its main full-service supermarket.

Avi Kaner, the market’s owner, had a virtual meeting with N.Y.U. officials on Mon., Nov. 29, to try to find out more about the construction timeline and if the market could still have a home at N.Y.U. For their part, university officials reportedly claim to feel “blindsided” by the supermarket issue.

Kaner referred comments for this article to Richard Lipsky, a lobbyist working for Morton Williams.

Lipsky said he has scoured documents and past newspaper articles but has found no actual contractual commitment by N.Y.U. to retain a supermarket on the block, which is bounded by LaGuardia Place and Mercer, Houston and Bleecker Streets.

“What was clear in 2012 was N.Y.U. promised the store would survive,” he said. “No one got that in writing, though. It only confirms, in this community’s view, how they’ve shown themselves to be less than honorable.”

However, according to Lipsky, the City Planning Commission’s resolution for the ULURP public-review for the N.Y.U. 2031 large-scale development plan for the university’s two South Village superblocks does state that 181 Mercer Street — the large, new building currently being completed at Mercer and Houston Streets — would contain significant space for retail, including a supermarket. The City Council, in its final vote on the ULURP, did not modify that commitment.

But, as Lipsky noted, it’s unclear whether that represents a legally binding commitment.

As he explained, “In ULURP it’s not contractual — it’s a zoning document. That’s the question. We know that ethically and morally they are obligated to [include a supermarket]. The question is are they obligated to do it? It would seem to me it’s binding on N.Y.U. to put a supermarket in there.”

But N.Y.U. now is reportedly saying the new building at 181 Mercer St. is “all accounted for” and that there is no space available in it for a market.

The N.Y.U. 2031 plan, as envisioned nine years ago, would have added up to four new buildings to the two superblocks. But the university has since quietly scaled back its megaplan. It now says that, for the moment, it is only building 181 Mercer Street, with no further construction planned.

The original N.Y.U. 2031 plan had the option of erecting a new university building at the current Morton Williams site, with a new public school or possibly another community-facility-type use, like a senior day center, in its base. But this is one of the three other buildings the university is now saying it does not plan to build.

Meanwhile, after delaying for years, the city’s School Construction Authority recently agreed to build a stand-alone public school at the Morton Williams site. But the agency says the school building — to be slated for citywide special-needs students — would not include space for the Morton Williams market.

Lipsky said that back during the planning process for N.Y.U. 2031, a task force for the project stressed that keeping a supermarket on the block was “an absolute essential for the community.”

The lobbyist noted that John Sexton, N.Y.U.’s president at that time, publicly pledged to heed the task force’s recommendations and address the community’s needs.

“Sexton stressed the importance of working with the community and the task force, and now everyone has amnesia,” he said. “They’re undermining one of the community’s main concerns.”

According to Lipsky, as of now, Kaner thinks the best option would be for Morton Williams to be included in the new 181 Mercer St. building.

Lipsky is working to mobilize support — both union and community — to save the supermarket. He said he has already spoken with Local 338, a member of the powerful Retail, Wholsale and Department Store Union (RWDSU), and that it’s hoped the union will soon be issuing a letter of support for Morton Williams, which has 80 employees.

“We have asked for the support of Local 338 and initial indications are that they are interested,” he said. “Their potential entry would raise the stakes in this fight.”

Meanwhile, local community leaders are raring to start protesting to save the key local food source, including Judith Callet, a former resident chairperson of the Bleecker Area Mercants’ and Residents’ Association, and Sean Sweeney, the director of the Soho Alliance.

“Sean and Judith want to do a press conference right away,” Lipsky said. “There is a cascading amount of support for saving the supermarket.”

Lipsky said Callet is rallying local block associations to come out in support of the store. He added that Noho leader Jeanne Wilcke is also getting involved in the effort and drumming up support.

“Judith would like the store to go in 181 Mercer St.,” Lipsky said, “so it would be more-continuous service, instead of putting it into the Bleecker [public school] building. I think that would be a preferred option for the store, too. They don’t want to close for two or three years [during construction] and deprive the community of the continuous service that they’ve demanded.”

Kaner, the store’s owner, previously noted it’s in the community’s best interests to try to make the transition to a new store as “seamless” as possible by trying to ensure there is never a period without a functioning market.

Lipsky said that a representative for Jerrold Nadler also said that the congressmember supports having a supermarket on the block.