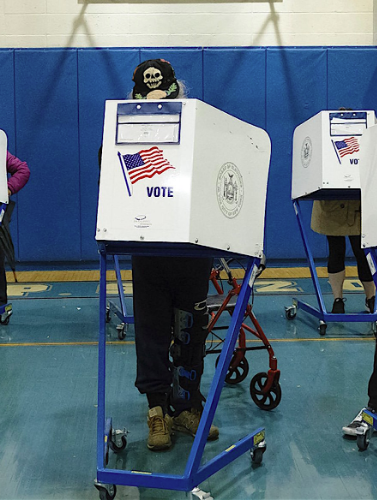 N.Y. prez primary is a go; State throws in towel

And Bernie Sanders and Andrew Yang will be on the ballot, just as other candidates likely will be, too, who are no longer actively campaigning.

The U.S. Court of Appeals for the Second Circuit on Tuesday upheld a lower court’s May 5 decision that the primary should not be canceled due to the coronavirus pandemic.

“We have reviewed all of the remaining arguments raised by Defendants on appeal and find them to be without merit,” the justices concluded.

The court plans to follow up its brief “summary order” with an opinion explaining its decision in further detail.

The Associated Press reported that the New York State Board of Elections will not appeal the decision to the U.S. Supreme Court. Doug Kellner, the board’s co-chairperson said they will urge voters to use absentee ballots and will focus on “managing the primary election in a way that minimizes the risks to the public and to election workers.”

According to the A.P., Jay Jacobs, the chairperson of the New York State Democratic Party, said it would have been “a whole lot safer” to cancel the primary, adding he hopes “none of the worst predictions for poll worker health will come true,” but that the primary will be held.

Yang and Sanders have suspended — but not officially terminated — their campaigns and have already endorsed Joe Biden, the party’s presumptive nominee. But they still want to exert influence at the upcoming Democratic National Convention and have a say on picking the vice presidential candidate. By remaining on the ballot, Yang and Sanders can win delegates who will push the two mens’ political issues at the convention.

Village attorney Arthur Schwartz was co-counsel for 10 Sanders delegates who sued to ensure that the primary would be held.

“The Second Circuit’s decision, like Judge Torres’s decision, struck the proper balance between public safety and democracy,” Schwartz said. “Democratic voting is ‘canceled’ only in totalitarian societies. Leaders need to find other ways for voters to cast ballots safely during times like these.

“We hope the Board of Elections redoubles its efforts to promote absentee balloting, so that New Yorkers can weigh in on the critical issues which will be addressed at the Democratic Convention — like the failures in our healthcare system during this pandemic.

“And let this decision be a warning to Donald Trump: If Andrew Cuomo can’t get away with it, you certainly won’t!”

On April 27, the B.O.E. — whose members are unelected — canceled the Empire State’s presidential primary. But Yang, joined by convention delegates for Sanders, sued to reinstate it, and on May 5 they prevailed in court.

At that time, Schwartz called it, “maybe the biggest case I have ever won.” He reiterated that sentiment on Tuesday, saying, “Oh, yeah, no doubt about it.”

Following the May 5 ruling, the B.O.E. requested an “expedited appeal.” Submitting the appeal was state Attorney General Letitia James, a political ally of Governor Cuomo. The B.O.E. and James argued that, given the current health risks, taking the unprecedented step of canceling the presidential primary would somehow not violate the candidates’ and delegates’ First Amendment rights.

Yet, the B.O.E. made no move to cancel other state and federal primary elections in New York, such as for Congress, that are also slated to be held June 23.

Plus, Cuomo had already issued an executive order for all New York voters to be mailed absentee ballots, so that they don’t need to physically go to the polls.

No other states have canceled their presidential primaries — though New York is admittedly the U.S. epicenter of the coronavirus health crisis.

Schwartz said this loss definitely is a black eye for New York’s Democratic Party. He said likely factoring into the B.O.E.’s decision not to appeal to the U.S. Supreme Court is that, at this point, it would take too long.

George Albro, co-chairperson of New York Progressive Action Network, was one of the Sanders delegates in the lawsuit that reinstated the presidential primary.

“We were all horrified that two unelected bureaucrats, at the behest of Democratic Party bosses, would actually cancel an election which hundreds of thousands of New York voters wanted to vote in — and this in a solid blue state,” he said. “Setting a precedent for Trump and the Republican-controlled states was very dangerous, to say the least. Fortunately, many voters and activists who cherish democracy came forward to oppose this assault on our constitutional right to vote, and the courts listened to us and agreed.”