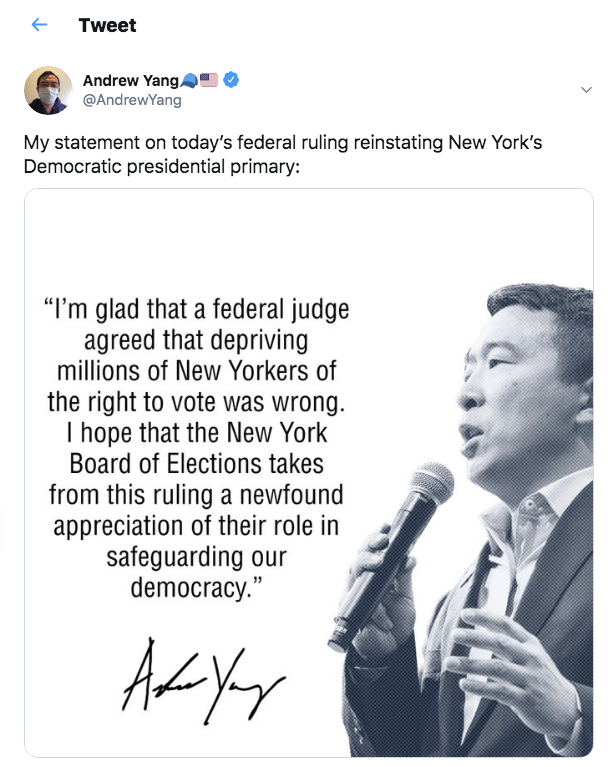 BY THE VILLAGE SUN | Berners and Yang Gangers rejoiced Tuesday as a federal judge ruled that New York’s June 23 Democratic presidential primary must be reinstated.

On April 27, the New York State Board of Elections canceled the presidential part of New York’s primaries, saying the election was moot since Sanders had suspended his campaign on April 8. The board also argued that, amid the coronavirus epidemic, it was safer that people not gather at poll sites.

As first reported by The Village Sun, the day after that, 10 members of Bernie Sanders’s New York delegates slate joined Yang’s suit as co-plaintiffs.

Schwartz, who is a principal attorney with Advocates for Justice, was Sanders’s 2016 New York campaign counsel.

Sanders himself, though, was not a party to the suit.

After the decision, Yang tweeted that “depriving millions of New Yorkers of the right to vote was wrong.”

In an e-mail to The Village Sun on Tuesday evening, Schwartz declared, “Big win. So far no appeal. May be biggest case I have ever won. Reinstated a whole statewide primary.”

In her ruling, U.S. District Court Judge Analisa Torres said that eliminating New York’s presidential primary would deprive Yang, along with delegate candidates, of their right to appear on the ballot. Torres also said that health concerns did not warrant calling off New York’s primary.

In fact, Governor Cuomo on April 24 had issued an executive order decreeing that every New York voter be sent an application for an absentee ballot — so that people would not potentially have to risk their health by voting at the polls. To get a postage-paid absentee ballot, all one has to do is sign the form and send it in.

Although Yang and Sanders both suspended their campaigns, they never terminated them. And when Sanders dropped out, he publicly said he wanted his name to stay on the ballot.

Both Yang and Sanders have endorsed Biden. Yet, each still wants to accrue delegates to push their key agenda issues, like universal income (Yang) and Medicare for All and free college (Sanders), at the Democratic National Convention in August.

Penny Mintz, a Village resident, was one of the Sanders delegate plaintiffs on the suit.

“This matters,” Mintz said of Torres’s ruling, “because candidates who receive at least 15 percent of the votes [in any given state primary] get delegates [from that state] to the convention, where they can help shape the party goals and the rules for future conventions. A vote for Bernie Sanders is a vote to see his progressive issues adopted by Joe Biden.”

New York, the U.S. epicenter of the pandemic, was the only state to cancel its presidential primary.

The New York Times reported that, on Tuesday night, Douglas Kellner, a co-chairperson of the New York Board of Elections, said the board was “reviewing the decision and preparing an appeal.”

Governor Cuomo, speaking on CNN, said the presidential primary would proceed for now, but that an appeal on the ruling was a possibility.

Schwartz and his co-counsels for the Sanders delegates issued a joint statement after the ruling:

“This evening’s decision from Judge Torres, in Yang v NYS Board of Elections, is an extraordinary victory for the democratic process here in New York, a state much in need of something to cheer about. …

“As Judge Torres said, ‘When a state-mandated primary is used to select delegates to conventions or nominees for office, the State is bound not to design its ballot or election processes in ways that impose severe burdens on First Amendment rights of expression and political participation.’ …

“As a consequence, the removal of presidential contenders from the primary ballot not only deprived those candidates of the chance to garner votes for the Democratic Party’s nomination, but also deprived their pledged delegates of the opportunity to run for a position where they could influence the party platform, vote on party governance issues, pressure the eventual nominee on matters of personnel or policy, and react to unexpected developments at the Convention. And it deprived Democratic voters of the opportunity to elect delegates who could push their point of view in that forum. …

“For Democrats to unite behind Joe Biden, for the thousands and thousands of [Yang and Sanders] supporters, particularly young supporters, to take up the fight against the Imperial President in the way which we need it to be taken up, the Democratic Party must be as open and democratic as possible.

“The choice made here by the Democratic Party — and it is clear that the Commissioners who we sued acted at the behest of the State Democratic Party leadership — was a choice which threw millions of potential activists to the wind.

“Our call to Jay Jacobs, chairman of the NY Democratic Party, is to demand that his Commissioners not appeal, and let this Primary move forward, designed in the best way to maximize the vote and make it as safe as possible.

“This decision is not a win for Andrew Yang or Bernie Sanders. It is a win for democracy. And it is also a warning to President Trump not to mess around with our right to vote him out in November.”