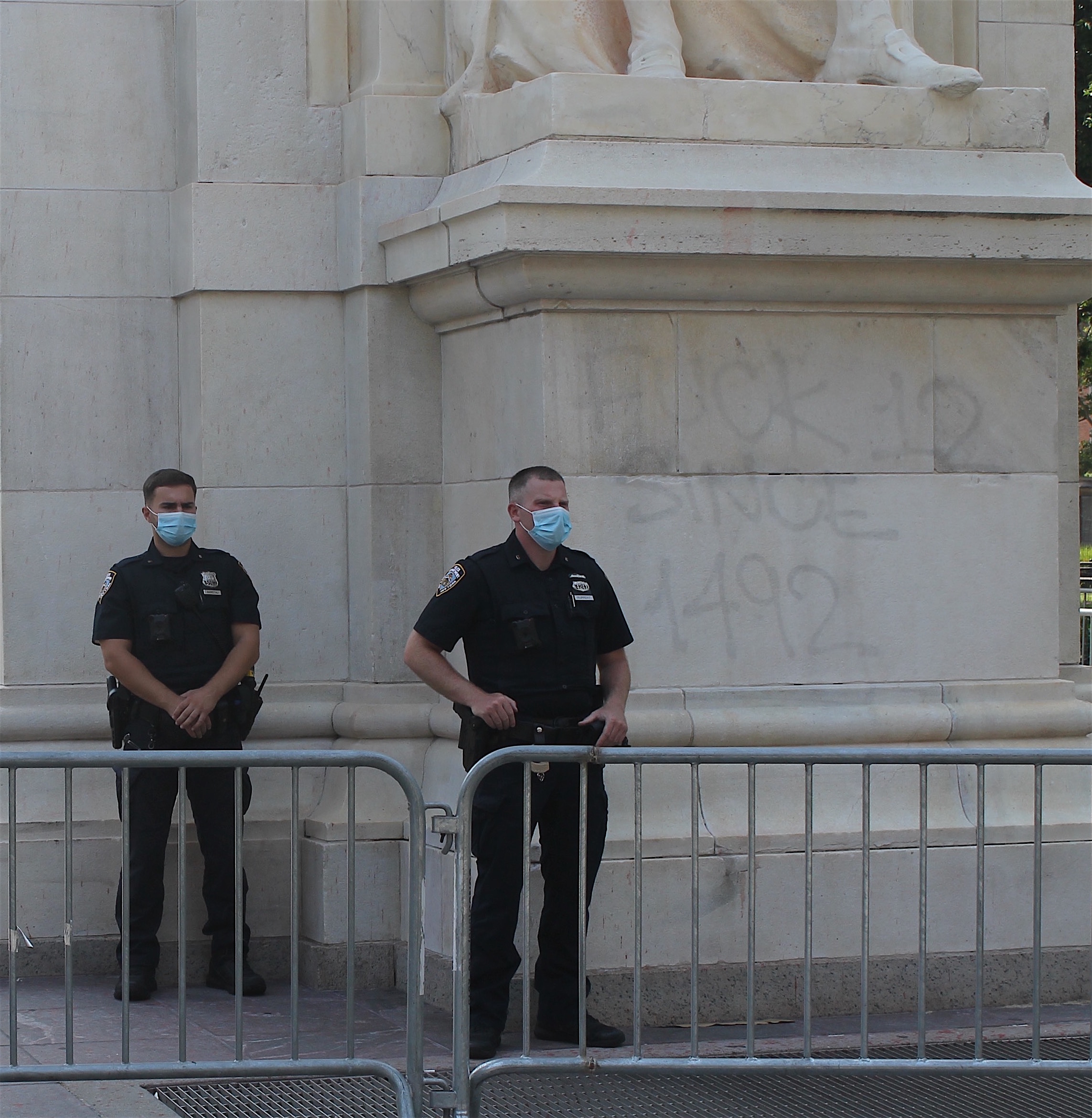 Police guard the famed Washington Square Arch next to a "ghost" of anti-cop graffiti. The arch's two George Washington statues were vandalized with red paint last month. (Photo by The Village Sun)

BY THE VILLAGE SUN | Not on their watch.

Sixth Precinct police are keeping an extra-close eye on the Washington Square Arch around the clock after two vandals pelted it with red paint balloons on June 29.

In fact, they couldn’t be any closer. At any given time, at least two officers are posted right next to the arch.

In addition, during the day, eight officers now rotate in and out of Washington Square Park, just to be ready in case protests pop up there, according to police. On Tuesday afternoon, two squad cars with a detail of cops were posted in clear view just a stone’s throw away on the other side of Washington Square North.

Both piers of the arch are also cordoned off by metal gates to keep anyone from getting near enough to even think of reaching out and writing graffiti on the historic marble monument.

Speaking of keeping an eye on the arch, the vandalizing of it was a black eye for the city. Locals, understandably, were very upset over the paint-bombing of the twin George Washington statues on the Village landmark, one of the cops on “arch duty” noted early Tuesday afternoon.

In fact, they said, monuments all over the city are also being similarly protected by police right now.

Washington led the Continental Army during the American Revolution and was the nation’s first president, but was also a slave owner. He freed his slaves in his will when he died.

The two arch vandals are still on the loose.

In addition, the park fountain was back on, shooting its plume of water up into the air once again.

Back on June 29, the day the arch was vandalized, the water wasn’t flowing. That same day police finally removed a naked homeless man, Matthew Mishefski, 25, from the park, who for weeks had been living in the dry fountain basin.

According to police, the Parks Department was asking the cops to take a lenient approach toward Mishefski.

Mishefski, who calls himself the son of God, had decked out the fountain with various furniture, including a table, several chairs and even a recliner.

As for why the water feature was turned off in June, though, one of the officers guarding the arch Tuesday said it wasn’t because the homeless man was living in it but because of “coronavirus — and they were fixing it.”

As the fountain sprayed away on Tuesday, a different homeless man washed himself off in its cooling waters amid the heat wave.

After the arch was paint-bombed at the end of last month, it was quickly powerwashed the same day to remove the offending pigment. Even after cleaning, though, at least one “ghost” of earlier graffiti is still visible in the porous marble. “F— 12. Since 1492,” reads the shadow of one scrawl — “12,” meaning “police” in the current anti-cop protester lingo.

Apparently, not all statues citywide are being guarded around the clock, though. In Tompkins Square Park, the one of Congressmember Samuel Sullivan Cox was recently tagged with another anti-police favorite — ACAB, for “All Cops Are Bastards” — along with an anarchy symbol thrown in, for good measure.

Cox served in Congress in both his home state of Ohio and New York. Known as the “Letter Carriers’ Friend,” he passed legislation leading to paid benefits and a 40-hour workweek for postal employees. Mail carriers raised $10,000 to fund the monument.