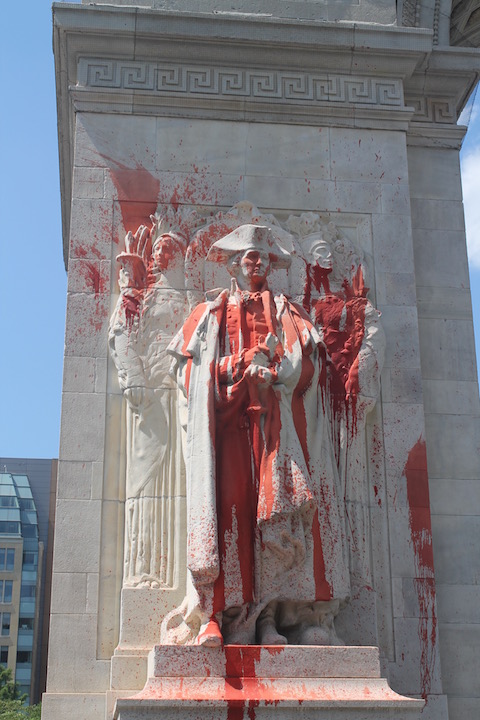 The "Washington at War" statue covered in red paint on Monday morning. (Photo by The Village Sun)

BY THE VILLAGE SUN | George Washington was left red-faced, literally — after the Washington Square Arch was doused with paint early Monday morning.

Robert Jackson, a community affairs officer at the Sixth Precinct, said the vandalism was reported around 3 a.m. on Monday.

There were also several large red blobs with paint streaks streaming down from them on the piers on the arch’s southern side.

The Parks Department quickly set about power-washing the offending pigment off the monument.

“We received reports of vandalism this morning,” said Megan Moriarty, a Parks Department spokesperson. “Our crew immediately assessed conditions and started removing the paint from the Arch.”

By Monday around 11 a.m., most of the red paint had been removed from the “Washington at Peace” statue, and a worker wielding a power-washer had moved on to the “Washington at War,” on the eastern pier. The paint appeared to be coming off pretty quickly.

The commander in chief of the Continental Army as well as the first U.S. president, Washington is known as the Father of Our Country. He was, however, also a slave owner. Though he did free his slaves upon his death — the only slaveholding Founding Father to do so.

The arch — which commemorates the centennial of Washington’s inauguration as president — is the world-renowned symbol of Greenwich Village.

“Pretty stupid, in my opinion,” he said. “It only gives fuel to the right wing.”

Some passersby snapping photos of the splattered landmark a couple of hours later were disapproving of the attack.

“Not Washington,” one man said, with disgust.

“Wait till October,” another warned, knowingly. He didn’t explain exactly what he meant, but Columbus Day is that month.

The Parks Department said anyone who observes vandalism in city parks should report it to 311.

But Sugar Barry, a member of the Washington Square Association, said she would have done more than than just call for help.

“I was sorry not to have been there,” she said. “My umbrella would have been a weak weapon but wielded with enthusiasm at the defacers!

As consciousness of racial justice sweeps the country, statues of past leaders tainted by racism and slavery have been targeted for removal.

In New York City, Council Speaker Corey Johnson has called for the Thomas Jefferson statue in City Hall to get the boot.

And, as first reported by The Village Sun, Paul Newell, a Lower East Side district leader, is advocating for Peter Stuyvesant’s name to be stripped from anywhere and everywhere it appears — including Stuyvesant Town, Stuyvesant High School, Stuyvesant St., Stuyvesant Square Park and even the Peter Stuyvesant Little League. The neighborhood Bedford-Stuyvesant and two Upstate towns named after the New Netherland leader should also be renamed, he said.