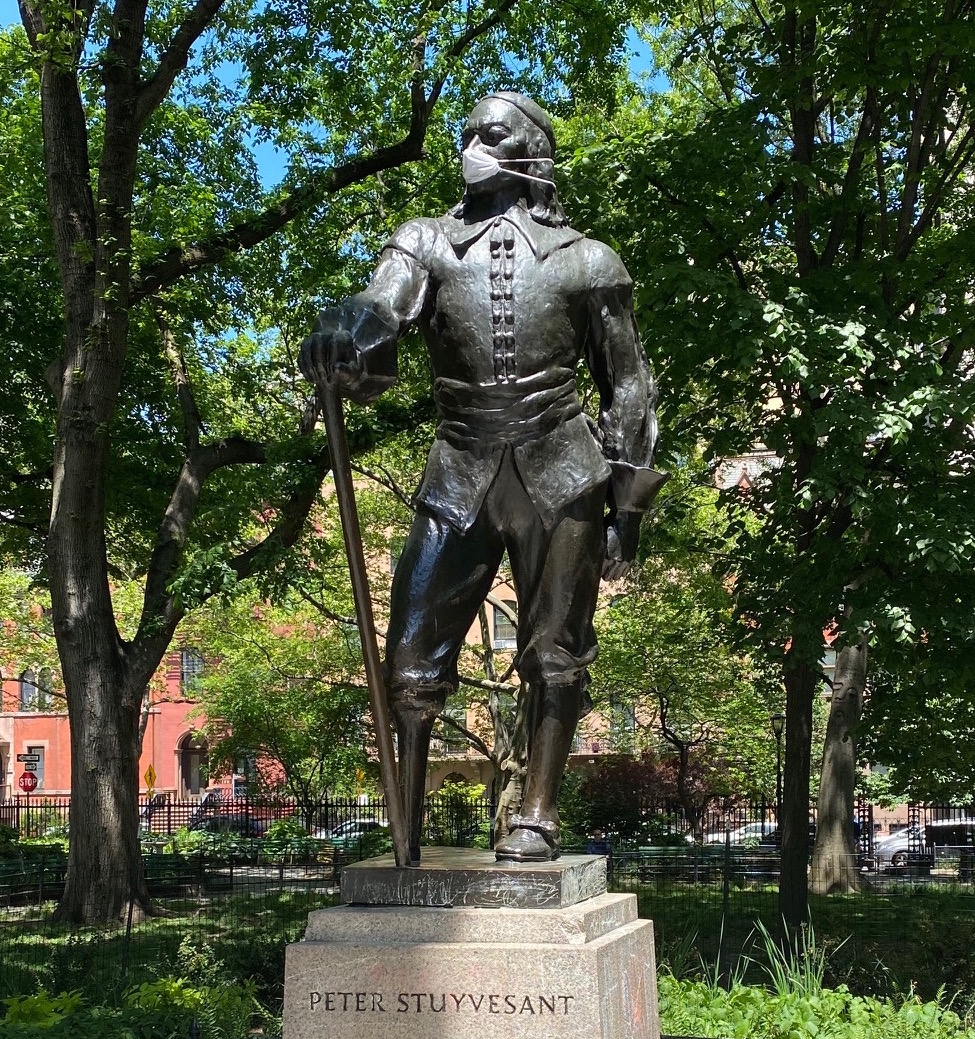 BY LINCOLN ANDERSON | Updated Tues., June 30, 2:30 p.m.: With consciousness about racism now at the fore in America, statues of Columbus, Confederates, colonizers and conquistadores have been toppled, vandalized or slated for removal.

In New York, Speaker Corey Johnson recently called for the Thomas Jefferson statue to be removed from the Council Chambers in City Hall. The Founding Father, who penned the Declaration of Independence, during his lifetime owned more than 600 slaves.

Meanwhile, Paul Newell, a Lower East Side Democratic district leader, says a historic New York icon whose name is particularly prominent in Downtown Manhattan, also should be “canceled” in a big way.

“Peter Stuyvesant is my candidate for most over-named New Yorker in terms of both his moral worth and historical significance,” Newell recently wrote, in a Facebook post.

“He was New Amsterdam’s largest slave owner,” Newell noted, “a vicious anti-Semite, a virulent opponent of religious freedom (going so far as to arrest a farmer for harboring Quakers and ban Lutherans from praying in their homes), and an incompetent, corrupt governor widely hated by his own constituents.”

Stuyvesant (1592-1672) did, in fact, own 40 slaves, making him the colony’s largest slaveholder. The director general of New Netherland also reportedly supervised what was likely Manhattan’s first public slave auction.

“Like the Confederates, the two most historically important things about him are both about losing,” Newell continued. “First, his arrest of the Quaker-harboring farmer was rebuked by the Dutch West India Company, resulting in the first declaration of religious freedom in the ‘New World.’ And, of course, losing New Holland to the English.

“When the English fleet arrived, Stuyvesant was so hated by New Amsterdamers that no one would fight them,” the district leader added. “When Stuyvesant went out alone to load the cannons, he was literally tackled by a group of citizens that included his own son. The English took the town without a shot while Stuyvesant sat in custody.

On top of everything, Newell said, “He was also, by all accounts, just a nasty, arrogant jerk.”

There are also two towns Upstate named Stuyvesant, he noted.

“I say they should all be renamed,” Newell declared.

Ironically, the district leader attended Stuyvesant High School — but school loyalty isn’t keeping him from calling out the elite institution’s namesake. Plus, he actually graduated from City-As-School.

The statue of “Peg Leg Pete” in Stuyvesant Square was created by sculptor Gertrude Vanderbilt Whitney, who also founded the Whitney Museum of American Art, in Greenwich Village.

Asked by The Village Sun if the statue should be removed, Newell said, “Yes, in my opinion.”

Though his Facebook post got a lot of comments and positive feedback, he said he’s not currently actively spearheading an effort to strip Stuyvesant’s name from city landmarks, or taking any steps beyond his statements on social media.

Nevertheless, he stands by his opinion that Stuyvesant’s name should be expunged from Big Apple landmarks, properties, institutions and maps.

And he recently started using the hashtag #CancelStuyvesant.

Stuyvesant’s final resting place is in a burial vault at St. Mark’s Church in the Bowery, at E. 10th St. and Second Ave. The church’s eastern courtyard features a bust of him.

The current St. Mark’s church rests atop the original site of Stuyvesant’s chapel, which sat amid his 62-acre farm, or “bouwerie,” which stretched from the present-day East Village to, yes…Stuyvesant Town.

Meanwhile, Matt Davis reported in a post on Facebook, “There is a very active discussion in the Stuyvesant High School alumni group about renaming the school.”