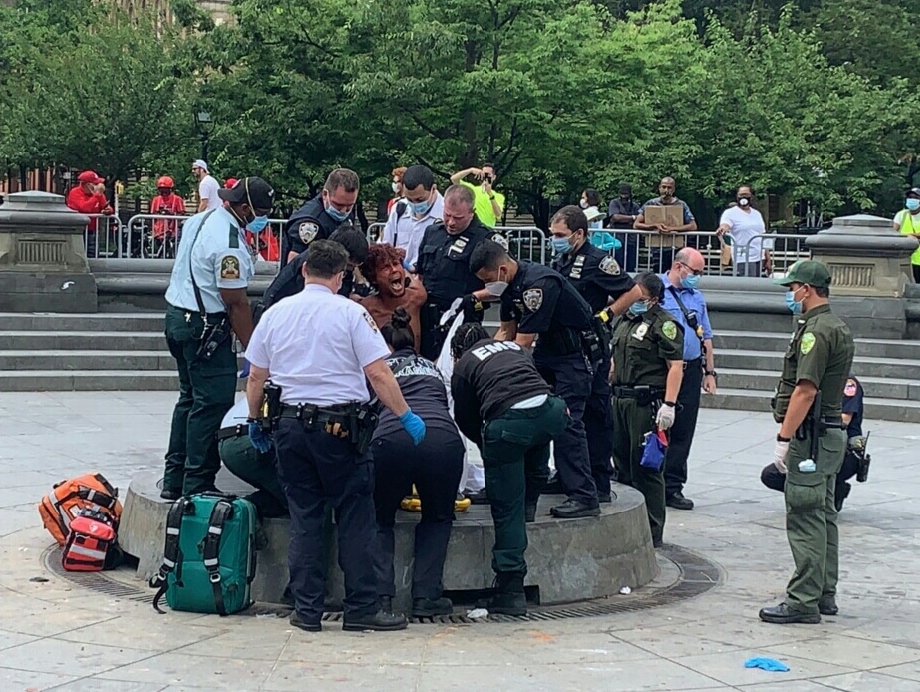 Matthew Mishefski yells while being removed from the Washington Square Park fountain on Monday. (Photo by Isaac Sultan)

BY THE VILLAGE SUN | Jesus didn’t exactly ascend from Washington Square Park — but he definitely made a pretty dramatic exit.

A naked homeless man who has been living in the famed park’s fountain for the past month or so — and who calls himself the son of God — was removed from the park Monday around noon.

There weren’t 12 disciples on hand. Instead there were more than 15 first responders, including police, Park Enforcement Patrol officers and emergency medical technicians, who all worked together to extricate him.

Around 11 a.m., Matthew Mishefski, 25, could be seen sitting naked and cross-legged atop the grate in the middle of the dry fountain. He got up and jogged a few laps around the basin, then lay down atop the grate again on his back in a spread eagle beneath the hot sun.

Then he rolled over onto his stomach and stuck his arms down through two of the holes in the grate.

The fountain was empty of the various furniture that Mishefski had collected in it, featuring several chairs, including a recliner. The Parks Department had removed the “furnishings” earlier.

The New York Post has previously reported that Mishefski, who is from Pennsylvania, describes himself as autistic and as having been in and out of psych wards.

25-year-old naked homeless man who took up residence in Wash. Sq. Park fountain for the past month is removed from the park on Monday. He was taken to Bellevue Hospital for psychiatric observation. pic.twitter.com/13tS5uwGFA

Police and PEP officers covered him with a white towel, but he took it and promptly made it into a pillow.

As the cops and PEPs gathered around him, he could be heard referring to the Constitution and that he was the son of God.

Adding to the commotion was the droning of a power-washer cleaning the red paint off the Washington Square Arch, which had been vandalized earlier that morning. That was soon followed by the whooping of the siren of an ambulance responding to the park.

As an E.M.T. strode toward the fountain, he was almost hit by a skateboarder trying to land a trick off one of the park’s black granite benches. The E.M.T. threw out his hands as if to say, “What tha…?”

“Help! I’m being assaulted!” Mishefski called out as the first responders tried to coax him out of his perch.

He then flipped onto his back again and locked his arms and now his legs also through the holes in the fountain grate.

A crowd gathered to watch and, of course, film the event on their phones.

A mother from 10th St. took in the action as she cradled her young son in her arms.

“I mean, he’s been living here for like three weeks,” she remarked. “They took all of his stuff this morning.”

She found it “interesting” that Mishefski previously was photographed with red paint on his face, making her wonder if he was behind vandalizing the arch early Monday morning.

“The kids used to skate in here,” she said of the fountain, “so we were a little sad that he moved in here.

“I heard that the fountain is broken — that’s why he’s been in here so long,” she added of the square’s squatter.

She also noted that Mishefski was in the fountain during the big Black Lives Matter in the park a few weeks ago. The protesters set up their stage south of the fountain, and let him stay in the basin — where he quietly read a book during part of the event.

Now a guy on a bike was riding around the outside of the fountain haranguing the cops.

“Fifteen police!” he shouted. “You spending my tax money for a naked, f—ing, crazy nut. Defund the police!”

Meanwhile, Mishefski was pronouncing that he had the rights of “life, liberty and the pursuit of happiness.”

At this point, it appeared one of the E.M.T.s gave him a shot in the chest, probably a sedative. A police spokesperson later confirmed, this is sometimes done in situations like this.

Less than 10 minutes later, a half-a-dozen cops pulled him out of the grate as he shouted, “Assault! Assault!”

He was strapped to a body board, then loaded onto a stretcher and into an ambulance, as some of the onlookers cheered. It had taken around 40 minutes to get him out of the fountain.

A police spokesperson said Mishefski was not arrested but was taken to Bellevue Hospital for psychiatric evaluation.

According to the Post, the homeless man had been arrested Saturday and taken to Mt. Sinai Hospital after getting into a brawl with two others guys in the park; then, on Sunday, he was taken to Beth Israel Hospital after he was walking around in the park naked and touching himself. (It wasn’t known if the guys Mishefski had fought with were the two aggressive young panhandlers wandering around the park on Monday.)

Robert Jackson, a community affairs officer at Greenwich Village’s Sixth Precinct, said Mishefski has been allowed to stay in the park for so long because of the Parks Department.

Megan Moriarty, a Parks spokesperson, told The Village Sun, “Being homeless in a New York City park is not a crime. We are working sensitively to encourage this individual to comply with Parks rules.”

According to Parks, since Saturday, Mishefski, in fact, had been arrested three times but always returned to the location.

Parks has engaged the Department of Homeless Services to provide outreach to him, with the goal of helping him “get to shelter.”

Parks confirmed that it removed “the elements he brought into the fountain.”

The Parks Department also confirmed that it has not turned on any of its “display fountains” — apparently meaning citywide — apparently due to the coronavirus pandemic.

Homeless individuals are allowed in city parks as long as they “are not obstructing other uses or violating our rules,” according to the department. However, one might argue if kids can’t skate in the fountain due to a furniture obstacle course, that qualifies as obstructing a use.

According to the department, the PEP officers’ first course of action is to educate parkgoers to the rules; if not followed, the next step is to issue a summons, and “only in extremely rare circumstances,” is an arrest made.

— With reporting and video by Isaac Sultan