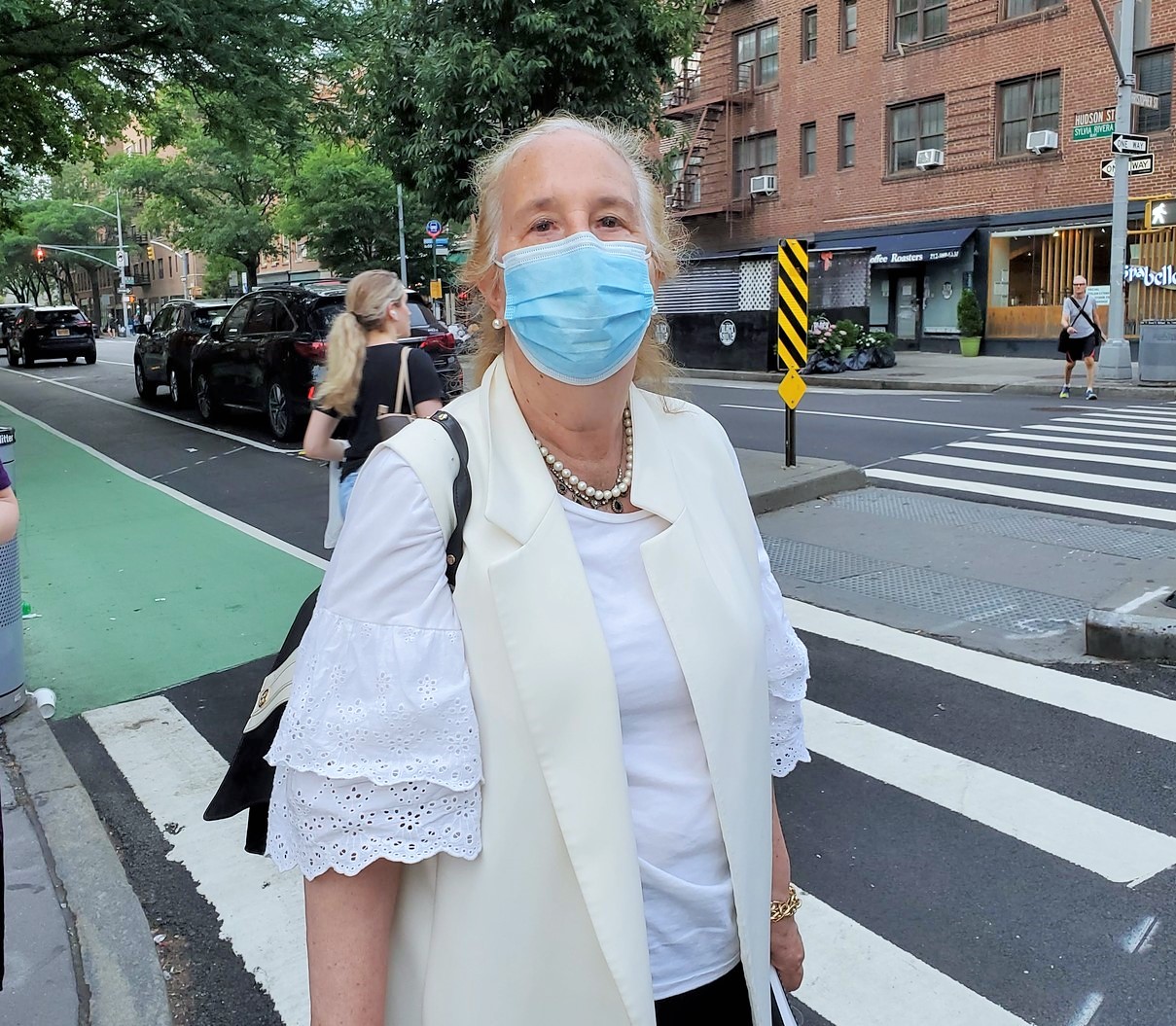 "People are angry," Borough President Gale Brewer said of the situation at Washington Square Park. She said she would like to see the temperature lowered. (Photo by The Village Sun)

BY LINCOLN ANDERSON | Mayor de Blasio sounds like he’s not backing down from the new 10 p.m. weekend curfew on Washington Square Park — even as the early closing wasn’t enforced this past Sunday night.

At the same time, though, he said he hopes the city won’t have to keep the early curfew — the park normally is open till midnight — for too long. But he indicated that decision will hinge on whether people “follow the rules.” In the meantime, the curfew is “a clear line” that needs to be set, Hizzoner said.

Speaking on Errol Lewis’s “Inside City Hall” on Monday, de Blasio said, “This was an idea that came from local police leadership, but I affirmed it. I think I know Washington Square Park real well. I went to N.Y.U., I spent years in and around the park.

“Of late there’ve been some real challenges and the concerns about noise, potential violence…” he said of the park scene. “We think it’s good to be proactive, have a set curfew that will allow us — as you know, with many, many parks, there’s a time, there’s a closing time. This [10 p.m. curfew] was on purpose to sort of disrupt some patterns that had been a problem. I’m very hopeful this’ll be something only needed for a short period of time. But I think we’ve seen some things obviously in the last year when situations got a little more advanced, they were much harder to address. I think handling them proactively is smarter for everyone involved actually.”

Lewis, in turn, noted, there’s “a difference between people who were being disorderly, you know, drug use and so forth, and those who were just kind of hanging out. Is there a way,” he asked, “to deal with the actual problem and the source of complaints without punishing everybody else who’s just there trying to enjoy the park?”

But “just kind of hanging out” is not the problem, according to the mayor, who said that amplified music and “contentiousness” over orders to turn it off have been issues.

“Look, our goal is to get to a situation where people can peacefully enjoy [the park] as late as appropriate,” de Blasio answered. “Still [it’s] a residential neighborhood, as you know, we got to strike a balance. But look, we saw a pattern of some larger gatherings that were getting to be a bit of a problem. You know, some contentiousness, even when people are asked to shut down or people are amplifying music and noise and being asked not to, and they weren’t paying attention to that instruction.

“You know, if folks will listen to the Parks Department, listen to the Police Department, we don’t need to have some of these rules,” he said. “But when there’s not a willingness to follow the rules, we got to set a clear line. So, this is what we’re doing for now. As I said, hopefully it settles the situation. It’s not something we have to do for long.”

The first weekend of the curfew was basically a rainout. On weekend number two, this past Friday night the early curfew was enforced without any problems. But Saturday night, parkgoers refused to leave the park, leading to a clash with police and 23 arrests. Sunday night, the police eased off and did not enforce the curfew, with a police spokesperson telling The Village Sun the whole idea was being “reassessed.”

But, judging by his remarks on Monday, the mayor is not wavering, and feels the early curfew still is the right idea and is needed, at least for now.

For her part, Manhattan Borough President Gale Brewer said she’s not happy about the high temperature surrounding the issue. The Village Sun bumped into the ubiquitous “Beep” at an event on Christopher St. on Monday.

She noted that one young guy she spoke to who supports fighting the curfew was extremely angry at the police. Meanwhile, she said, residential neighbors are ticked off about the noise and conditions in the park.

“We have a big conference call [about it] coming up,” Brewer said, “with the Parks Department, a lot of stakeholders, the community board.

“We can’t have ATV’s, I call them — dirt bikes — going through the park,” she insisted.

Brewer also implied that some people hanging out in the square probably need a job and other help.

“If I had my druthers, I’d have on-site job applications there,” she added, “heavy-duty jobs, mental health, support services.”

Around 9 p.m. Monday in Washington Square, it was pretty much the usual scene. Drug users and dealers were recently locked out of their regular stomping ground in the park’s northwest corner; police have fenced off that spot for at least the next few weeks, hoping to dislodge the activity. Instead, though, on Monday evening the drug crowd had just shifted over a bit and were sitting along the darkened benches on the park’s western walkway that aligns with Washington Place.

On the eastern side of the park’s fountain plaza, a woman was singing pretty loudly into an amplified microphone as a man accompanied her on an unamplified flat drum that had sounded like rim shots.

An amplified rock-fusion band jammed, not too loudly, just south of the fountain.

“Edibles! THC!” a guy walking around called out on the plaza’s south side, where other men were also selling things from tables.

Meanwhile, shirtless young skateboarders whisked back and forth under the lights of the Washington Square Arch, their skateboards clattering loudly as they tried to land tricks and jumps. The Parks Department says that since April it has been trying to educate them that it’s illegal to ride in the park and that they should instead go to a nearby skate park.

As for the landmark arch, it sported, under a taped-up sheet of clear plastic, some possibly fresh graffiti that looked like it had been partially cleaned off, with more cleaning left to do on it.

Mainly, though, people were just sitting on benches and hanging out in the hot, humid weather, not doing too many active things in the actual plaza area ringing the fountain, which was emptier than usual. The fountain was on.

At least one man strolling through, who did not look like a park worker or cop, seemed to know the score. As he sauntered by, he pronounced good-naturedly to no one in particular, “No sound devices!”