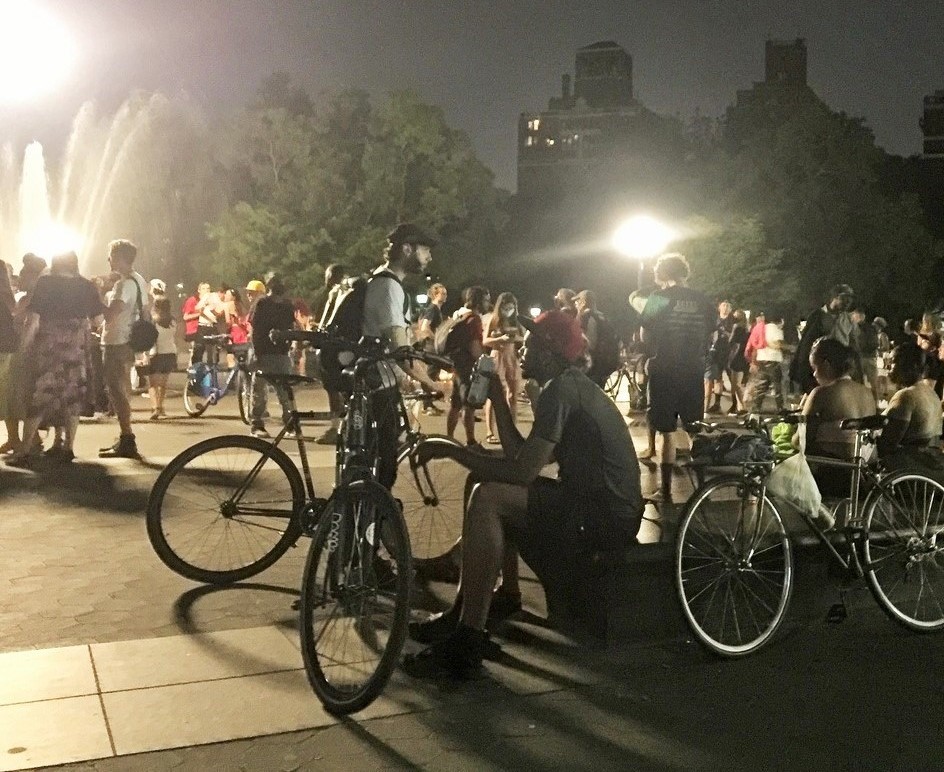 People hung out in Washington Square Park after the 10 p.m. early curfew on Sunday, and this time police did not do anything about it. (Photo by Sharon Woolums)

BY LINCOLN ANDERSON | In the words of Monty Python…and now for something completely different.

After the clash in Washington Square Park on Saturday night when police tried to enforce a 10 p.m. curfew and 23 people were arrested, cops took the opposite approach Sunday evening: They were nowhere to be seen.

Meanwhile, young revelers packed the park by the hundreds, playing amplified music well past the new 10 p.m. curfew. At 12:30 a.m. they were still going strong and could even be heard a couple of blocks away.

A police spokesperson told The Village Sun that the decision not to enforce the early curfew on Sunday evening was “an assessment that was made.”

What time the park actually would close on Sunday night into Monday morning was still unclear when The Village Sun called around 12:15 a.m.

“It’s on an assessment basis when it will close tonight,” the spokesperson said. “They will be told that the park will be closed at a [certain] time.”

As for what would happen next weekend, the spokesperson said that a new statement on the curfew situation would be forthcoming before next Friday.

“There will be something more clear,” he explained, adding, “Reassessment will be made on the closing time of the park.”

That statement, he said, could be coming from the police, Parks, City Hall, or all three.

The Parks Department and police recently jointly decided to close the park at 10 p.m. on Fridays through Sundays, two hours earlier than its usual curfew. Signs to that effect were posted at the park’s entrances two weeks ago.

The Parks Department said the reasons for the early curfew included ongoing issues with large crowds and amplified music late at night.

Police, in a statement of their own on the early curfew, said, “This decision was made due to safety concerns following several recent incidents where large, sometimes violent groups have refused to leave the park and engaged in disorderly behavior. This behavior has included jumping on vehicles, making threats to officers, throwing objects such as bottles and other objects at police and in one instance throwing unknown objects at responding F.D.N.Y. and E.M.T. vehicles which were responding to a building.”

The first weekend with the early curfew was literally a wash, as rainy weather made it moot, mostly keeping parkgoers away.

On the second weekend, this past Friday went smoothly, as police cleared the square by around 10 p.m.

Videos of the clash showed young parkgoers pushing back as squads of riot-helmet-wearing police tried to herd them toward the park’s southern exits. One cop was even seen picking up and carrying one guy who apparently wouldn’t budge.

A local woman who was passing by the park Sunday night, and requested that her name not be published, said the young parkgoers were feeling euphoric over not having been booted out of the place.

“The music is loud,” she said, calling on her cell phone from Washington Square North, just outside the park. “They were dancing. It was joyous. I was into it for a while. They were celebrating: ‘Where’s the police?’ It was zero police. They’re in a good mood, I can tell you that.”

She was calling right before midnight, the park’s normal closing time. Even then, there was no sign that police were moving to shut things down for the night. She said she still did not see any cops around at all.

Something different this night was that the partiers, or at least some of them, were more concerned about not leaving litter behind them, which has been another complaint of neighbors.

“One thing I noticed,” the woman said, “is there are a lot of girls in their 20s that are running around with plastic bags and picking up trash. They said, ‘We don’t want to give them any reason to kick us out.'”

So while police were reassessing, the parkgoers were reveling.

“I’m all the way at MacDougal St. and I can still hear them,” the woman said as she headed home from the park to go to sleep. “They’re pushing it.”

The Villager said she is not a fan of how the park has become a raucous free-for-all. At the same time, she does not support the early closing time, noting she used to enjoy coming out to the park around 10 p.m. to relax. She blamed Parks and the police for allowing the situation to get out of hand.

“They should have been enforcing the rules,” she said.

When The Village Sun called again to check at 1:45 a.m. Monday morning, the police spokesperson said the park still had not been closed.