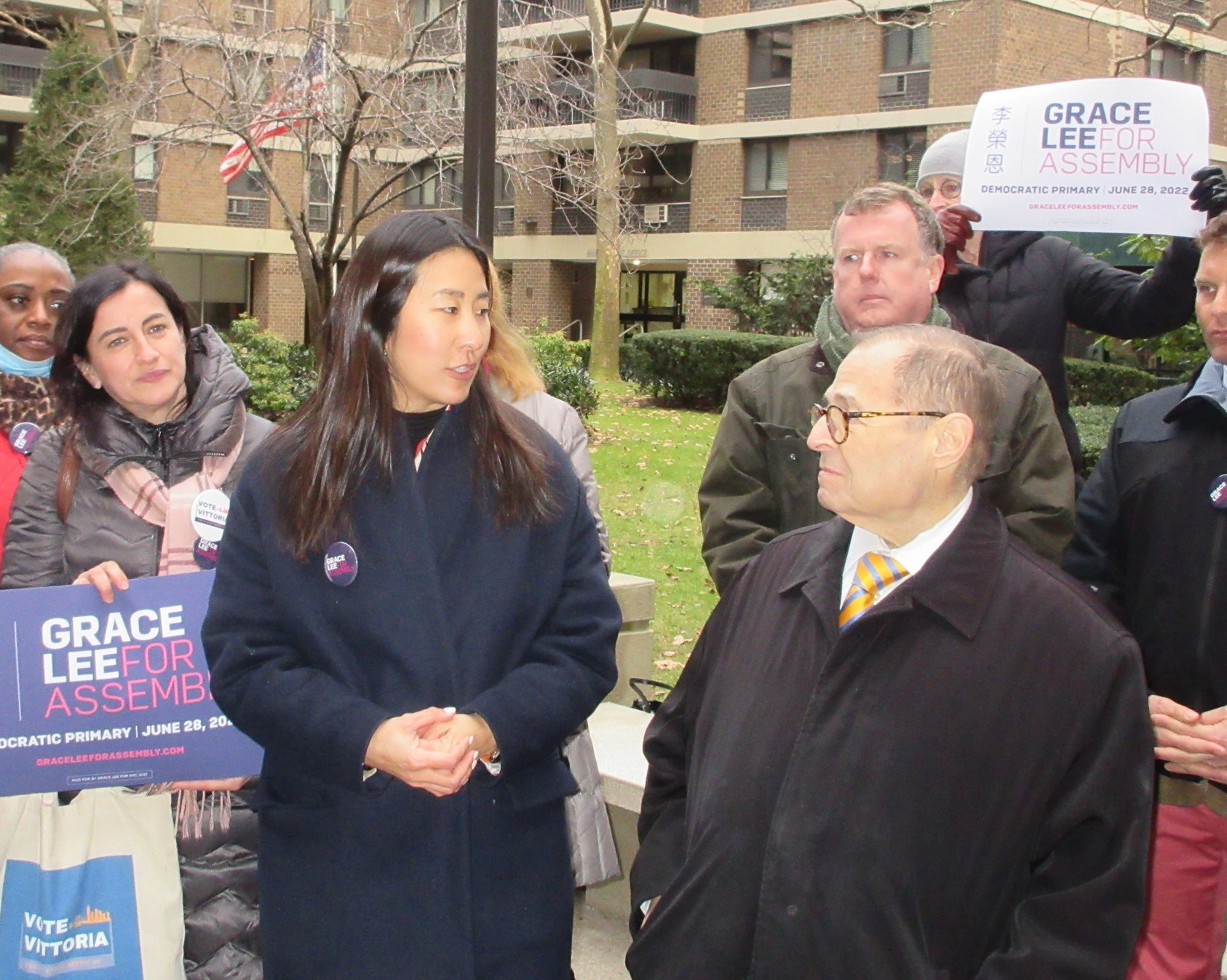 Congressmember Jerry Nadler announced his endorsement of Grace Lee at Southbridge Towers on Thursday. In the photo, they are flanked by District Leaders Vittoria Fariello, who is running for state Senate, left, and Dennis Gault. (Photo by Dashiell Allen)

BY DASHIELL ALLEN | In one of Lower Manhattan’s most competitive races in the June 2022 Democratic primary, Congressmember Jerry Nadler on Thursday endorsed Grace Lee for state Assembly in the 65th District.

Lee is a community activist and co-founder of Children First, an organization opposing the “unchecked development of 250 Water Street.”

Nadler made the announcement at Southbridge Towers, a former Mitchell-Lama apartment complex located next to 250 Water Street, which for the past several years has been at the center of Lee’s community activism.

District Leader Caroline Laskow, the president of the Grand Street Democrats, was also in attendance, as well as former Councilmember Kathryn Freed, who is now running for State Committee.

District Leader Vittoria Fariello, who is running for state Senate against incumbent Brian Kavanagh and Assemblymember Yuh-Line Niou, was also in attendance to support Lee, though not officially to endorse her.

In the past month the boundaries of the 65th Assembly District have radically shifted, thanks to redistricting. The district no longer includes Battery Park City and large parts of the Financial District, instead extending further northward into parts of the East Village.

“I’m very proud to endorse Grace Lee to the Assembly,” Nadler said. “As an organizer she has a proven record of serving the diverse communities of Lower Manhattan, and has consistently elevated the voices of the most marginalized people in the district.”

“She has fought for the safe cleanup of the mercury brownfield near schools and the Seaport, empowered deaf tenants on Forsyth Street to demand building repairs, stood with Chinatown against anti-Asian hate, and delivered food to NYCHA families and seniors throughout the pandemic. She will be a relentless fighter for Lower Manhattan both in Albany and on the ground of every neighborhood in her district. And she is laser-focused on making New York a safe and more affordable place for everyone who wants to live here.”

“This is a really proud moment for me,” said Lee. “It’s such an honor to have Congressman Nadler’s endorsement. He is an activist at heart. In the Assembly he fought for mothers and children…and fought developers like we have down here, fought Donald Trump against a 150-story development on the Upper West Side. And in Congress he has stood with Lower Manhattan — he helped to get healthcare funds for our 9/11 first responders and survivors.”

Other candidates in the 65 Assembly race have also been busy garnering endorsements.

“The socialist presence in Albany has been growing with each election cycle and Illapa Sairitupac is going to continue that trend,” Salzar said. “When Illapa was young, his family was kicked out of their apartment. Having a lived experience with displacement is what motivates Illapa to fight for much-needed tenant protections like Good Cause Eviction.”

Brisport said, “As the first openly gay state Senator of color in New York, I’m proud to endorse Illapa Sairitupac, a fellow gay socialist of color. Illapa is running for office because his fellow organizers asked him to, and I trust him to fight for transformative legislation like the New York Health Act. Illapa is a dedicated D.S.A. member who knocked on doors to help get our socialist slate into office — now it’s time for him to join us.”

Meanwhile, Jasmin Sanchez, a New York City Housing Authority activist and former D.S.A. member, has garnered support from a wide variety of grassroots activists and organizers, including Fannie Ip, one of the leaders of East River Park Action; housing activist Lisa Burriss; Reverend Andrew Ford III; Dahoud Smith, the founder of Prison to the Streets; and Magda Napoleon, who co-founded Lower East Side Mutual Aid with Sanchez at the start of the COVID-19 pandemic.

“Socialism lives outside of the DSA,” she continued, “DSA should also not make working poor people like myself feel that I cannot run for a seat to represent my community. DSA is doing a disservice to its mission by running candidates against or not supporting homegrown candidates.”

Alana Sivin, a public defender and D.S.A. member, also recently entered the race, with the backing of the East Village’s Coalition for a District Alternative (CODA). She was also endorsed by Naomi Peña, the current president of Community Education Council District 1, activist and drag artist Marti Cummings and the Run For Something PAC.

Neighborhood advocate Denny Salas, a former City Council candidate, is also planning to enter the race, although he has not officially declared his candidacy.

The Democratic primary election will take place this June 28.