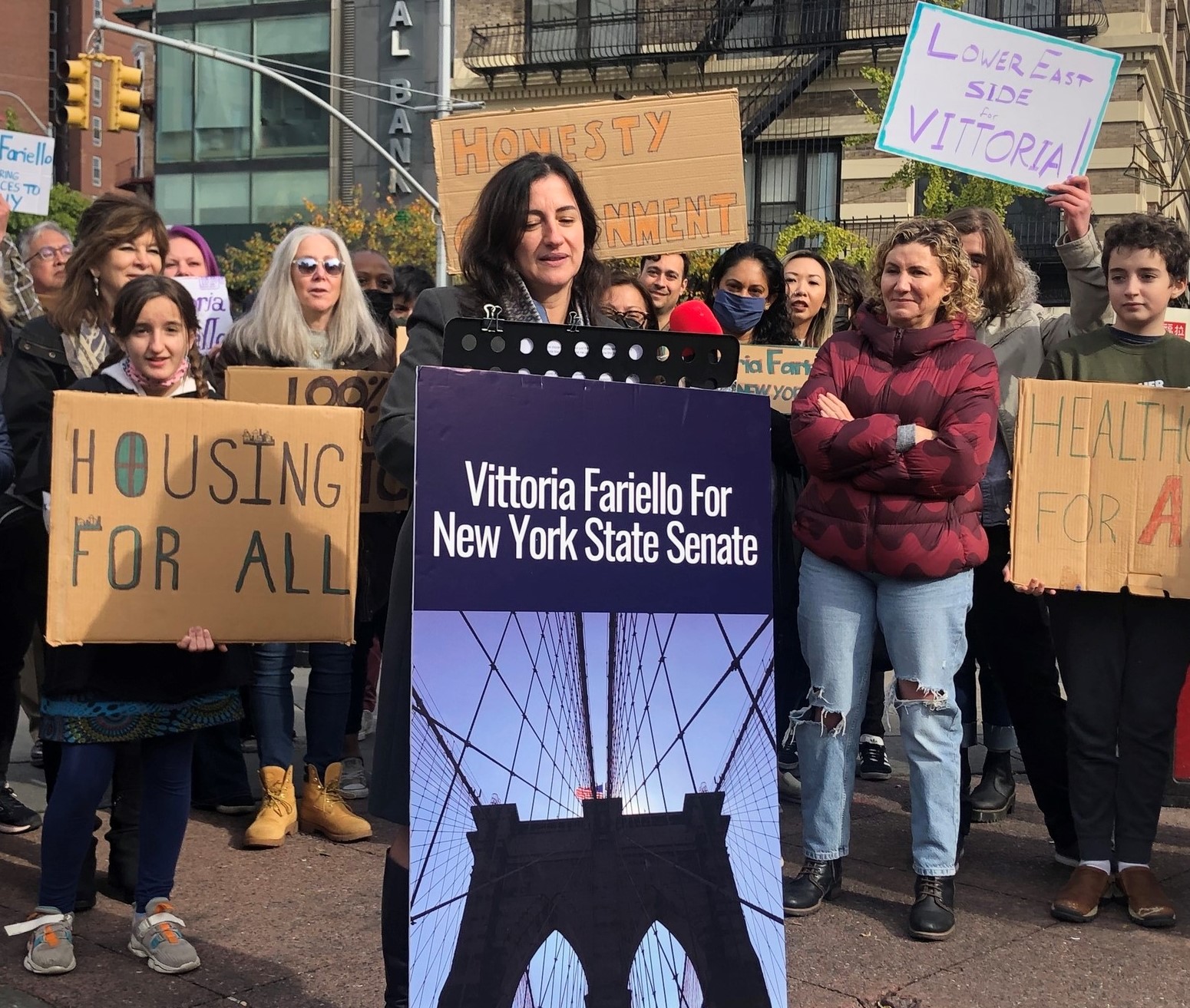 Vittoria Fariello kicked off her campaign for state Senate on Sunday. (Photo by Dashiell Allen)

Fariello is running in the 26th State Senate District against incumbent Brian Kavanagh, who represents most of Manhattan below Houston Street, as well as parts of Williamsburg, Brooklyn Heights and Carroll Gardens.

It’s more than half a year away, but the June 21 2022 state Senate Democratic primary race is already heating up. In addition to Fariello and Kavanagh, Illapa Sairitupac, a Democratic Socialist organizer and social worker, and Alana Sivin, a lawyer and advocate for criminal justice reform, are also running for the seat.

“Our communities have been ignored for far too long in the state Senate,” Fariello said during her remarks.

“Our public entities are not transparent and our government is not responsive,” she said. “Whether it’s the Soho/Noho rezoning, building jails in Chinatown or reforming the [Democratic] Country Committee in Brooklyn, our community’s outcries have been ignored. Our neighborhoods have been disregarded and forgotten, taken for granted.”

Fariello has dedicated the majority of her life to serving the public. Back in the 1990s she organized unpaid “welfare workers” who she said were mistreated under Mayor Giuliani’s “workfare” program, under which some welfare recipients were required to work for their benefits.

Now a public-service lawyer with a private firm, she has been a district leader for the area covering the Financial District and parts of Battery Park City since 2016.

During her time in office she has worked to strengthen Manhattan’s democracy by reforming long-standing party rules from the inside. In the past, county party bosses had full control over who got the Democratic nomination in the absence of a public primary.

That’s what happened when Manhattan Democratic Party leader Keith Wright nominated then-Assemblymemer Brian Kavanagh for the seat in 2017 after Daniel Squadron abruptly resigned midterm, despite the County Committee members overwhelmingly supporting another candidate at the time.

Along with others, Fariello fought to change the county party’s rules, so that County Committee members — the city’s most local level of political representation — would get the final say in who represents them.

“It was a fight but we got it,” she told The Village Sun.

Fariello shared with The Village Sun some of her bold ideas for bringing about change in New York State. She wants to tax property owners’ vacant apartments, and use the tax revenue to “either subsidize affordability elsewhere,” or incentivize landlords to drop their asking prices.

Recently Fariello has spearheaded the campaign for 100 percent affordable housing at 5 World Trade Center, a site currently under the control of the Lower Manhattan Development Corporation and the Port Authority.

At her campaign launch, friends, neighbors and fellow Democratic district leaders declared their faith in the candidate.

“I cannot imagine a better advocate for this community than Vittoria,” said Jill Goodkind, an affordable housing activist. “She’s fought harder than anyone I know.”

“I’m excited to be here because we have a chance for our voices to be heard, a chance for the status quo to be challenged, and finally a chance for real change to happen,” said Victoria Lee, a Chinatown district leader.

“Vittoria has a big future vision for a better, more equal society,” Lee said. “But you can also trust that Vittoria is going to be the one that reads the fine print, making sure that our democracy is upheld to get us to that vision”

Fariello also has extensive experience as an investigative litigator, probing corruption in the city’s Department of Buildings.

She accused the incumbent Kavanagh of not deeply engaging with the community he represents.

“It was the right time” to run, she said of launching her campaign. “I love this community. We have an amazing district all across.”