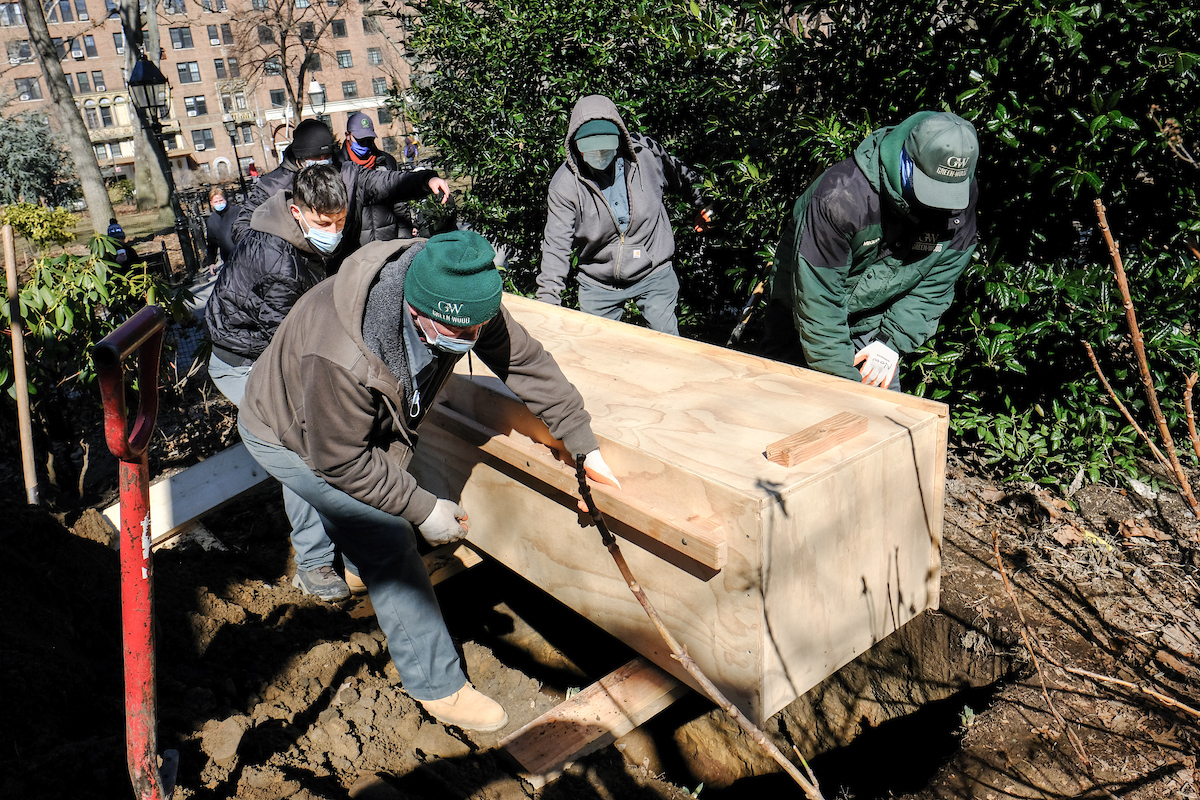 BY THE VILLAGE SUN | Human remains that were dug up during the years-long renovation of Washington Square Park were reinterred in the park on Tuesday.

Because of COVID restrictions on gatherings, the Parks Department did not hold a ceremony, but plans to do so after restrictions have been lifted.

More than 200 years ago, the landmarked Greenwich Village park was a potter’s field where thousands of people — including the unidentified, the poor and yellow fever victims — were buried. In addition, several church burial grounds, including some belonging to black churches, were also located in the northeast part of what is today’s park.

The site was a potter’s field from 1797 until 1825, after which Washington Square Park was constructed in the 1850s.

The early New Yorkers’ fragmentary remains were found during construction in and around the park between 2008 and 2017. In consultation with the city’s Landmarks Preservation Commission, they were removed for reinterment at a later date. Because the remains were fragments, forensic analysis did not reveal many details about the individuals.

Brooklyn’s Green-Wood Cemetery volunteered to do the reinterment, which was overseen by the director of archaeology at L.P.C.

The remains were placed in a wooden box and buried 5 feet underground within a planting bed in the park. An engraved paver marks the site, near the Sullivan St. and Washington Square Park South entrance.

“Today we honor these individuals and acknowledge Washington Square Park’s history as a final resting place for thousands of early New Yorkers,” said Parks Commissioner Mitchell Silver. “We are so grateful to our colleagues at Green-Wood Cemetery and the Landmarks Preservation Commission for their expertise and guidance on this important project.”

“L.P.C. was pleased to work with NYC Parks to help with the process of excavating and reinterring the human remains,” said Sarah Carroll, Landmarks chairperson. “We are grateful to NYC Parks for ensuring that archaeology was appropriately completed, and the human remains were respectfully treated throughout the process.”

Richard Moylan, president of Green-Wood Cemetery, said, “Making sure that those who have gone before us are remembered with dignity and respect is a critical part of Green-Wood’s mission. We are honored to provide our expertise on such an important historical project.”

“The land that we now call Washington Square Park has served thousands of New Yorkers in various capacities over the generations,” said Sheryl Woodruff, deputy director of the Washington Square Park Conservancy. “It is important to remember and respect the history of this space and the people that were laid to rest here. We are heartened to see these individuals returned to their final resting place. We are grateful to our colleagues at NYC Parks, Green-Wood Cemetery and the Landmarks Preservation Commission for their careful and considerate work.”

Some, however, were disappointed they were not notified of the reinterment ahead of time. In particular, some Community Board 2 members had hoped to attend. William Morrison, the park’s new deputy administrator, had previously mentioned the interment at a meeting of the C.B. 2 Parks and Waterfront Committee.

“I was disappointed that the Parks Department didn’t tell at least us, i.e. the C.B. 2 Parks Committee,” said Sharon Woolums, a public member of the committee. “It would have been easy to social distance 6 feet apart as they interred our neighbors of long ago 6 feet under! Actually, it was my idea to have a memorial ceremony for it. To honor the dead — it’s the Native American in me — so important. To do it later, after the fact, is not the same.”

“We look forward to having the memorial when the [COVID gathering] restrictions are lifted,” Morrison told the community board members on Tuesday.

Local artist Ian Dave Knife was also unhappy with how the reinterment was handled.

“I wish they had called me to do it the African way,” he said. “There’s a correct way to bury ancestors.”

He added, “This summer I plan to stage a protest in Washington Square Park where I plan to sleep in a tent to watch over the dead.”