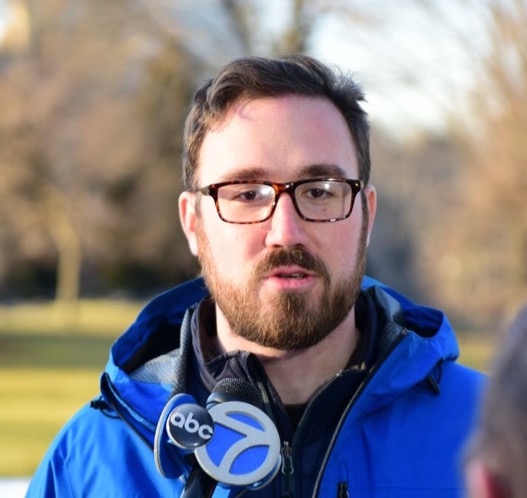 Also, although he is in charge of the landmark Village park, Morrison’s title is not administrator but deputy administrator.

Will Morrison introduced himself to the Community Board 2 Parks Committee at its meeting on Wednesday.

He has been in the role for about seven weeks.

The park administrator before Vellonakis, Sarah Neilson, like him, supervised the park and was also the conservancy’s executive director.

But, as Morrison explained to the C.B. 2 committee members, his only official role is with the Parks Department. It was not immediately clear why he was not also appointed director of the conservancy. Nevertheless, locals worried about blurred lines with the dual-role administrators — and the conservancy gaining more power over the park’s affairs — will surely be pleased at the news.

Due to a hiring freeze, the Parks Department promoted Morrison internally, though it did not give him the administrator title along with the promotion.

Morrison, 28, has been with Parks for seven years. Previously, he was the department’s senior manager of marketing and special events. As such, he worked on large-scale events across the city, including political rallies in Washington Square Park. He said, ideally, special events are “ephemeral” and leave no trace on parks afterward.

C.B. 2 members questioned him about various issues, from his relationship with the conservancy, to homelessness, drugs and skateboarding in the park.

On the first matter, in response to a query by Susanna Aaron, he answered, “I will still be working with the conservancy. But they will be like any other community group coming to me to work on the park.”

For example, he noted, he works on events and projects with the Village Alliance business improvement district and it would be the same with the conservancy.

“How do you see your interaction with Police Department?” he asked.

Morrison said he has been in touch with Captain Stephen Spataro, the commanding officer of the Village’s Sixth Precinct, but that “enforcement issues” at the drug-dealer level are a police matter.

He added that, in a new initiative, on Monday and Tuesday mornings, Parks Enforcement Patrol officers and Department of Homeless Services street-outreach workers will be going into the park’s northwest corner.

“It usually takes between 200 and 300 contacts from the Department of Homeless Services for [homeless individuals] to engage with [D.H.S.],” he noted.

“Homeless, people — they are there,” he stated. “And in a lot of ways, public parks and public spaces are some of the last places they can go.”

As a result, Morrison said, he wants to connect the homeless in the park with the services they need.

Coral Dawson asked about ongoing problems with lights being out in the park.

“My latest count was 37 lights out in the park,” he noted.

He said lighting is handled by the Department of Transportation and that the agency will be sending someone this month to check out whether the problem is the wiring or something else.

Dawson asked for temporary lighting to be set up in the meantime. But Morrison noted, and she agreed, that diesel-powered generators for light towers are very noisy.

The park official added there is a citywide plan to upgrade all park lights to LED bulbs, and that “they are working their way down [through] Manhattan” to install the energy-efficient bulbs.

Another quality-of-life issue was skateboarding in Washington Square. Officially, it’s not allowed, but skateboarders are now a fixture in the square, zipping around and launching themselves into the air to do jumps and tricks.

“We’ve had a lot of issues with skateboarders, and efforts to rein them in have not worked,” Aaron noted. “They just run roughshod through the park and there’s no way to contain them.”

She wondered if part of the space could be designated for skateboarding in the evening hours or if a skate park could be created nearby.

Morrison said that, from what he’s seen, “a lot of the skateboarders are regular. They are the West Villagers and Villagers who are coming to the park for skateboarding.”

He said PEP officers are not taking a “blunt approach,” but rather, are engaging with the skaters.

“It’s more of an ‘I know you, you know me — this is not the place for skateboarding,'” he said.

As for the drunk driver who slammed into a police car under the park’s arch in late November, Morrison said “a granite slab [on the arch] and two bollards” were lost in the incident.

“We’re just really happy that the police officer [in the car] who was hit survived, that the damage to the arch was minimal,” he said.

In addition, the deputy administrator said the human remains that were unearthed during the park renovation project will finally be reinterred next month. This includes a body that was associated with a tombstone, as well as other remains. Greenwood Cemetery will assist with the reinterment.

Regarding the resumption of events and programming in the park, Morrison said a pandemic executive order is still in place limiting gatherings to 50 people at any given time.

Speaking to The Village Sun afterword, Caccappolo, the Parks Committee chairperson, said Morrison made a good impression on the board members.

“I think the comment he made that really won over the committee was his discussion about homeless outreach,” he said, “that he thinks parks are the place of last resort and that there can be outreach there.”

On the issue of skateboarding, Caccappolo said the committee members are divided.

“Some think it should be outlawed,” he said. “Others think there should be a place for them in the park.”

As for his own view on skateboarders, Caccappolo tends more toward the first camp.

“I worry about them running into an old person or little kid,” he said. “They’re damaging the steps inside the fountain and on a stage area [across from the Garibaldi statue].”