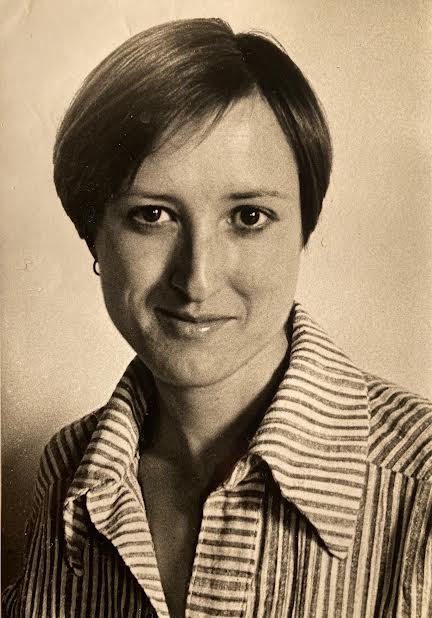 Mablen Jones in an author photo for one of her books. (Courtesy Robert Adzema)

BY THE VILLAGE SUN | Mablen Jones, 78, who was killed by a truck while crossing the West Side Highway last week, was a pioneering loft tenant in Hudson Square.

In a phone call with The Village Sun, her former husband, sculptor Robert Adzema, filled in the picture about the artist and writer who tragically lost her life on Wed., Nov. 10.

Adzema was married to Jones for about 20 years. He said she was born and raised in Nutley, New Jersey. He, too, grew up in the Jersey suburbs. Jones attended the Rhode Island School of Design and the two met at Indiana University. She had a master’s of fine art and sculpture, and may have also gone on to earn a degree in pottery making from the Fashion Institute of Technology, he said.

Together, they published a book, “The Great Sundial Cutout Book,” in the late 1970s. Jones did the writing for it. Adzema went on to make a career out of sculpting sundials.

“Basically, she was an artist and a writer,” he said. “She’s a terrific writer. She wrote about clothes. She was a photographer, used a pinhole camera. She was a very loyal and honest person, very smart, articulate. Her outstanding qualities were her loyalty and honesty.”

Jones wrote two books about clothes, one on caring for garments, the other on the clothes that rock stars wear.

Jones and Adzema were the first residential tenants at 99 Vandam St., at Greenwich Street, when they moved there in the 1970s. The seven-story former paper warehouse was eventually legalized for dwellings under the Loft Law.

“Pioneers, you’d call us,” he said. “We called it ‘TriNorCa,’ ‘Triangle North of Canal.’ We were trying to live independently as artists and have artists space that we could afford. So we, as much as possible, built lofts actually to code and pioneered. We did everything legally. We went up to Albany. We signed petitions. We worked with Ed Koch and Board 2. We worked diligently to legalize the building. There was a precedent set in Soho.”

Adzema and Jones divorced in 1989 and he does not believe she remarried.

Jones was killed crossing the highway at Canal Street in a spot without a crosswalk. According to police, the driver had been waiting at a stoplight and started to move forward after it turned green when he hit Jones. He remained at the scene and was not arrested.

As for whether Jones had been enjoying a walk in Hudson River Park before she lost her life, Adzema, who now lives in Connecticut, said he couldn’t say for sure. They weren’t in regular contact. However, he noted, “She used to ride her bike a lot. She was very active.”

Jones leaves a sister, Charlene, whose last name may be Jones or Allison, he said.