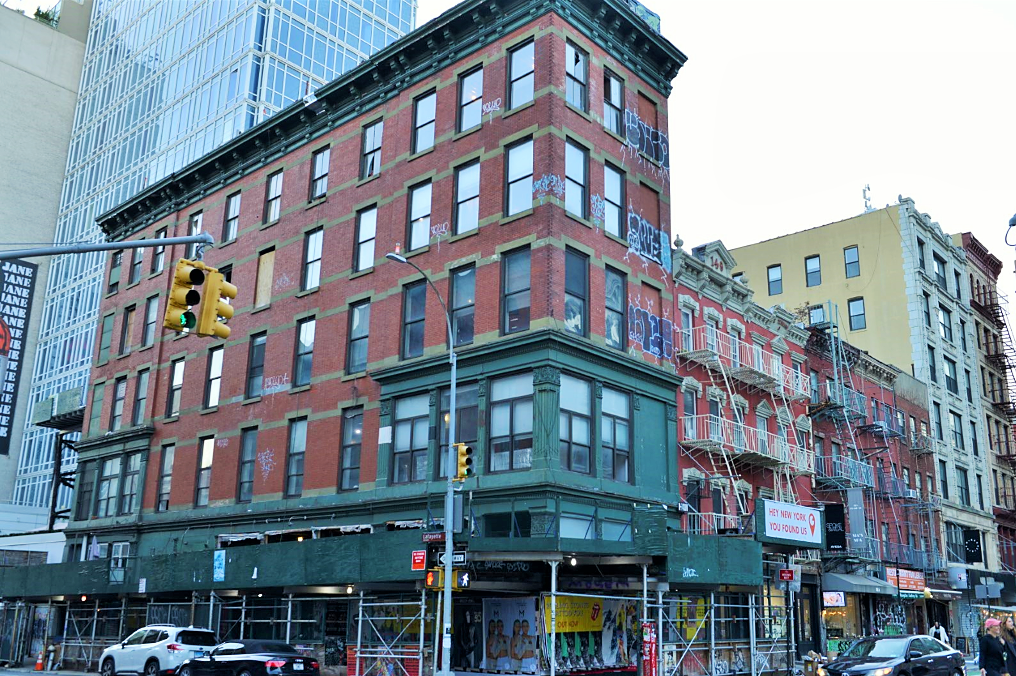 This vulnerable, low-scale corner at Grand and Lafayette Streets is in the Chinatown section of the Soho/Noho rezoning, though the plan "misleadingly" calls it "Soho East," a new lawsuit says. (Photo by Harry Pincus)

BY LINCOLN ANDERSON | A lawsuit seeking to “annul and vacate” the Soho/Noho/Chinatown rezoning charges that the scheme would cause “mass displacement” of thousands of current neighborhood residents, as well as violate both the U.S. and New York State Constitutions.

On Thursday, the nonprofit Coalition for Fairness in Soho and Noho, along with 10 individual resident plaintiffs, filed suit in New York State Supreme Court against the Department of City Planning, the City Planning Commission, the City Council and Mayor Eric Adams over the rezoning, which became law in December.

The suit was brought by attorney Jack Lester.

The Village Sun first reported last month that the litigation was in the works.

The complaint says the rezoning imposes “unconstitutionally retroactive fines and confiscatory fees” on longtime residents, including a new mandatory $100 per square foot tax — the so-called “flip tax” — for required conversions of artist-zoned lofts to residential use. According to an architect’s affidavit in the lawsuit, average conversion costs, including the flip tax, plus compulsory construction upgrades for the area’s old repurposed manufacturing buildings, would be a staggering $1 million per unit.

These costs would cause crushing financial hardships, loss of financing and difficulty obtaining mortgages, the suit states. These charges are retroactive, the suit further stresses, and would cause widespread “residential instability” in the rezoning area. Although today many residents of Soho and Noho are not artists, the city has allowed this situation to exist for decades, which has caused people to invest in property with certain expectations, according to the plaintiffs.

“At its core the rezoning undermines reasonable investments that petitioners relied upon, and upsets settled expectations resulting from six decades of governmental policy,” the suit states. “For the first time in 50 years, the rezoning would mandate [that] previously condoned, but out-of-compliance residential units, either conform to the rezoning or face punitive fees and prohibitive, and in many cases, impossible construction costs … .”

The effect of these prohibitive costs would be “a virtual governmental taking of property without just compensation,” a violation of constitutional rights, the plaintiffs allege.

To many Soho and Noho residents’ relief, on Jan. 14, Mayor Adams vetoed a separate bill by former Councilmember Margaret Chin that, on top of the flip tax, would also have imposed steep fines on nonartists living in Joint Live-Work Quarters for Artists units.

The rezoning legalizes straight residential use in formerly manufacturing-zoned Soho and Noho, plus upzones the two districts, as well as a neighboring section of Chinatown, allowing for taller and bulkier buildings.

Over all, the lawsuit charges that the developer-friendly rezoning threatens to transform a historic community revived by artists in the 1960s into “a high-density enclave of luxury high-rise apartments and big-box department stores under the false promise of creating affordable housing and racial equity.”

It’s estimated that the rezoning, which would allow high-rise towers up to 27 stories tall in some spots, would add a total of about 2 million square feet of new development to the area.

“This rezoning is a land grab by big developers disguised as redistribution of wealth,” attorney Lester said. “It violates the constitutional rights of the city’s longtime residents, including the elderly, retirees, artists and working families. The de Blasio administration ignored the clear objections of the community board and short-circuited multiple legal processes to bulldoze the rezoning through City Hall in the 11th hour of an outgoing administration that is no longer accountable for the harm and displacement now faced by New Yorkers living in Soho, Noho and Chinatown. If this unconstitutional policy is not vacated, many residents will face the cruel choice of displacement from their homes or bankruptcy.”

As Lester noted, C.B. 2 overwhelmingly opposed the Soho/Noho rezoning by a vote of 36 to 1.

The suit argues that City Hall failed, under mandated state and city environmental impact laws, to “take a hard look” at the rezoning’s impact on “the sustainability of the historic character of the site…and the displacement and destabilization of the current residents of the unique Soho, Noho and Chinatown neighborhoods.”

Eighty percent of the rezoning area is located within five landmarked historic districts, yet the rezoning will encourage large-scale demolition, the plaintiffs charge.

The rezoning would have a disproportionate impact on Asian Americans, the lawsuit warns, particularly low-income residents living in Chinatown and neighboring communities whose homes face being replaced by costlier housing and buildings due to the rezoning.

The plaintiffs include a cross-section of residents, none of whom are certified artists themselves, meaning they would be subject to paying the conversion flip tax. In some cases, they were married to certified artists who have died. They include an academic specializing in Spain’s medieval period arts, a CUNY employee who was the wife of a late certified artist, a psychotherapist, a financier married to a pop culture writer who is ineligible to be a certified artist (since she is not a fine artist, filmmaker, dancer or musician), and a woman working in book publishing whose late husband was New York City’s first film commissioner and a certified artist.

The suit, however, notes that the city for decades has basically not enforced Soho and Noho’s unique artist-in-residence requirement.

“A 1983 occupancy survey…showed that only approximately one-third of households in Soho and Noho were occupied by certified artists,” the lawsuit points out. “Familial succession of J.L.W.Q.A. by nonartists, sales and leasing of units to nonartists further accelerated nonartist occupancy. While hundreds of artists were certified through the 1970s and 1980s, that number dwindled to fewer than 10 per year in the latter half [of] the 2010s. Today, Soho and Noho are primarily residential enclaves of approximately 8,000 people.”

The lawsuit explains that, in recognition of Soho/Noho’s shifting residential character, the city in 1986 approved a zoning amendment that preserves an artist’s family’s right to remain in their home.

“This provision is patently lacking from the 2021 rezoning,” the litigation states. “The 1986 zoning amendment, unlike the 2021 rezoning, had strong public support and was based upon a solid foundation of community engagement.”

As opponents have done since early on, the lawsuit calls hollow the rezoning’s promise of creating affordable housing under the newly imposed Mandatory Inclusionary Housing program. Instead, it says, the plan would incentivize developers to demolish low-scale housing, creating a neighborhood “that will be wealthier, less diverse, more expensive, and would generate far fewer units of affordable housing than forecast by the city’s unexamined and conclusory projections.”

“The city’s rationale of affordable housing was exposed as a sham due to gaping loopholes in the law, which exempt all development under 25,000 square feet,” the suit explains. “Mixed-use development is also exempt, allowing for high-rise development stacked on top of commercial use. All commercial development is exempt, as well, including the large allowance for retail uses of up to 25,000 square feet, including on side streets and on upper levels, which will directly crowd out residential uses on the same upper floors.”

The lawsuit also takes aim at the “artists’ fund” that would be financed by the conversion flip-tax payments. The rezoning’s final environmental impact statement said this fund would be used to support the J.L.W.Q.A. program in Soho and Noho. However, the rezoning the City Council approved says funds can be used in Manhattan anywhere south of 14th Street, an arrangement, the lawsuit says, that exists nowhere else in the city and which is “contrary to basic principles of fairness.”

For the full text of the lawsuit, click here.