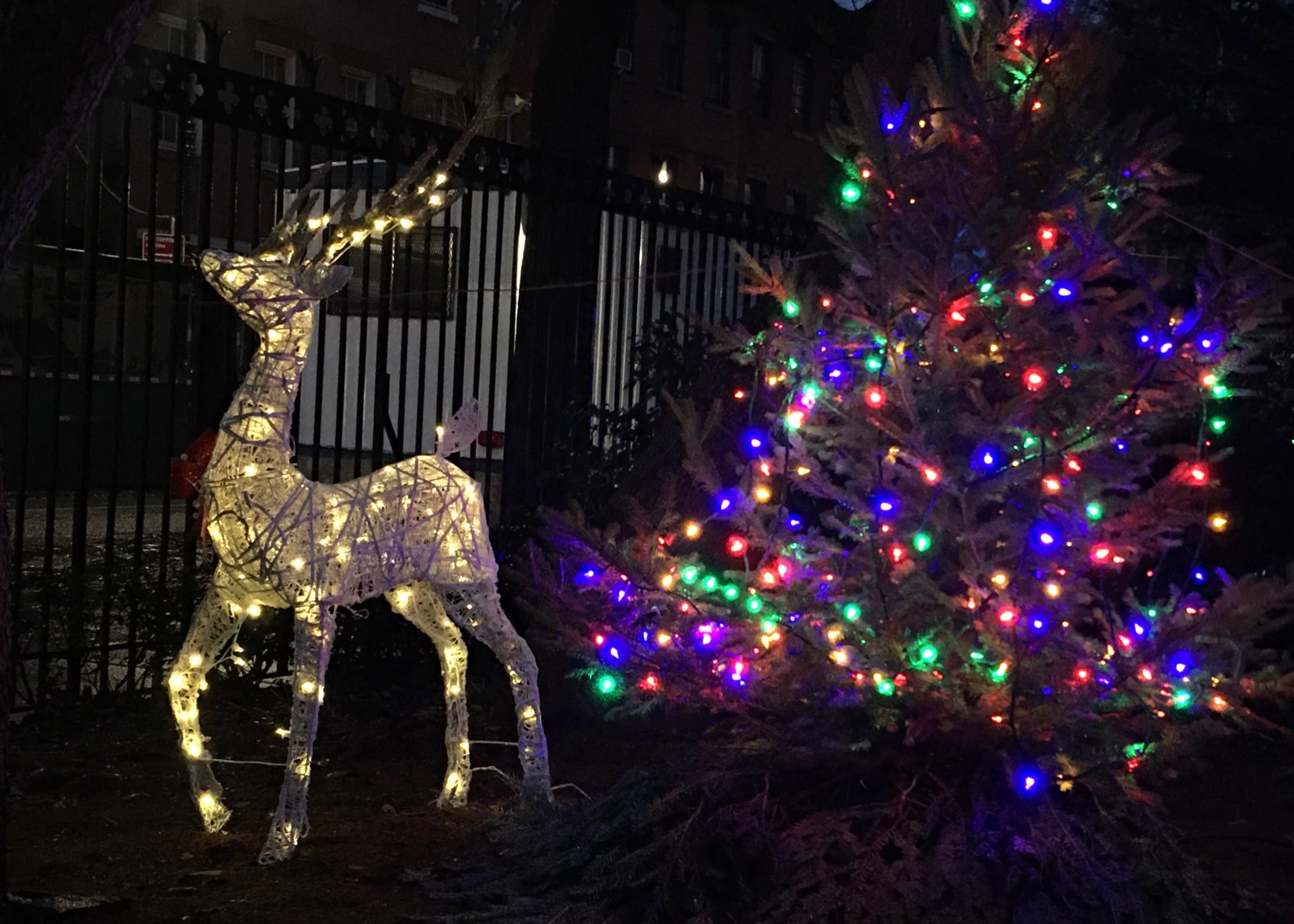 A reindeer and holiday tree in the Jefferson Market Garden. (Photo by MarilynMAR Perez)

BY THE VILLAGE SUN | In Greenwich Village, the holiday lights are shining brightly in the Jefferson Market Garden, at Sixth and Greenwich Aves.

Meanwhile, Mayor de Blasio and First Lady Chirlane McCray kicked off Kwanzaa by lighting the first night’s candle on a kinara in City Hall Park on Sunday. They hope it will become an annual tradition.

Kwanzaa, which is based on African harvest festivals, got its start in 1966 during a period of racial unrest in America. The holiday was created to give black people an alternative to the dominant culture’s Christmas and an opportunity to celebrate themselves, black history and black culture and empowerment.

Each day of Kwanzaa has a unifying theme, such as umoja (unity), nia (purpose), kuumba (creativity) and imani (faith). Candles are lit each night, similar to Hanukkah.

De Blasio said he first experienced Kwanzaa when he visited McCray’s family in 1991.

“I want to be very clear, I had heard of Kwanzaa,” the mayor said. “I knew it was something special, but I never experienced it until I met a young woman named Chirlane and she took me home to her family and her family really honored the holiday, and they focused on it, and they really wanted everyone to understand the meaning. They took great care to explain the power and the essence of what Kwanzaa was all about and I was very deeply moved because the values of Kwanzaa are powerful. I felt a sense of an understanding of community and heritage, and an honoring of the ancestors that was so powerful, so vivid, so necessary, and it spoke to me.”

“Kwanzaa is much more than a holiday,” McCray said. “The seven principles are a guide for our lives and a reminder of what is important, our values, our family, our community. We had our struggles this year, and how did we get through? With unity, together, by caring for each other and by remembering the older adults and those who had the least among us and that is how we will move forward, with unity, together, with the spirit of umoja.”

The idea of having a kinara in City Hall Park was sparked last week by Ebro Darden on his Hot 97 radio show “Ebro in the Morning.”

However, more than 50 years after the first Kwanzaa was observed in America, the annual winter ritual has not caught fire quite as widely as its founders might have hoped. Reportedly only about 1 to 5 percent of American blacks currently observe the holiday.