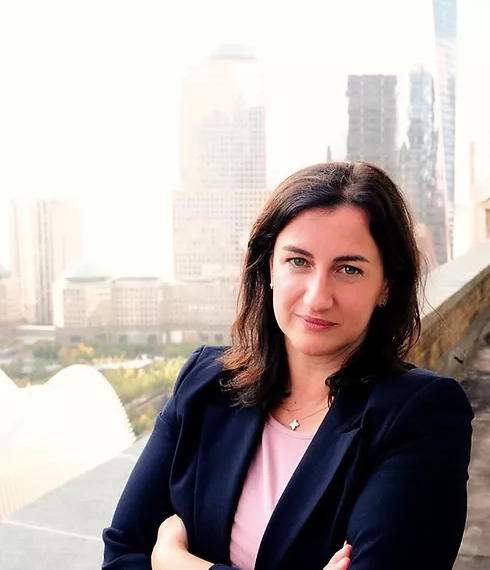 BY LINCOLN ANDERSON | It’s not easy to unseat an incumbent, but Vittoria Fariello is hoping she can pull off the feat in her Democratic primary challenge to state Senator Brian Kavanagh in District 27.

The newly redrawn district spans all of Manhattan south of 14th Street except for a small notch at the district’s northwest corner that includes the Meatpacking District and some of the Village.

Fariello recently met with The Village Sun at Veselka Ukrainian restaurant in the East Village to talk about herself and her campaign. A Democratic district leader — the lowest-level elected political official — she’s an attorney who lives with her family in the Financial District.

Basically, she said, she is running at the urging of local politicos who feel strongly that she is the right woman for the job.

“Community leaders asked me to run because I’ve been present and active in the community,” she said.

“The first Chinatown jail [protest] march, I was there,” she noted, for example. “I think they’ve seen me do things that a [state] senator would do and that I would stand up for them.”

Asked what’s wrong with Kavanagh’s representation of the district, Fariello largely declined to criticize him, saying she is trying to run a positive campaign.

However, here and there, she occasionally did land a jab.

“He’s never been at a home-healthcare attendant rally,” she noted of the state senator. Healthcare workers in Chinatown are fighting for fair pay for 24-hour homecare jobs. It’s one of the causes she has championed

In general, she said, a criticism of Kavanagh is that he’s “not showing up” enough in the community.

One supporter, who requested anonymity, said that while Kavanagh is pretty good “on policy,” local politicos not only want a talented lawmaker but also someone who would stand with them shoulder to shoulder in the trenches on urgent issues; Fariello fits both those bills, he said.

By contrast, fewer clubs are backing the incumbent Kavanagh. He has the support of Chinatown’s United Democratic Organization and the East Village’s Coalition for a District Alternative.

A third candidate in the primary, Danyela Souza Egorov — who is running on a law-and-order platform and is a strategy adviser for the New York Charter Schools Association — lacks any local political club support.

“I’m supporting Vittoria for state Senate because she unequivocally stands with the working people of Lower Manhattan,” Marte said when endorsing her in April. “I’ve been with Vittoria on picket lines and at protests where the targets are large organizations with big political reach. But Vittoria doesn’t waver from a fight.”

Although she’s the kind of candidate that real estate PACs might want to target with negative ads — as they did against Marte last year — so far none have done so.

“Ben Thypin did come after me at one forum,” she said, referring to the Open New York svengali. “He said how could I support affordable housing at 5 World Trade Center but not [the] Soho/Noho [rezoning]? They’re different things. We should be prioritizing affordable housing everywhere. But it matters the way we do it.”

Also telling and another factor in the race, something Fariello and her team tout, is that, despite Kavanagh being a five-year incumbent, Fariello has more individual campaign contributors than him.

Fariello’s supporters value her fighting spirit and willingness to take on the powers that be — including even her own party leadership. She successfully brought a lawsuit that ended the practice of outgoing County Committee members being able to vote for Democratic candidates for special elections to fill vacant seats. It’s arcane stuff to most voters but it was an important change in solidly blue Downtown Manhattan, where the Democratic nominee always wins election. Similarly, she pushed for the County Committee members’ votes to be the deciding factor in picking candidates in special elections — ending the practice of party leaders being able to make the call.

Fariello is also a member of the Coalition for a 100% Affordable 5 WTC. She noted that, in a first, she recently led all the Manhattan Democratic district leaders in getting together to lobby Keith Wright, the Democratic county chairperson, to write to Governor Hochul in support of making the 5 World Trade Center project totally affordable housing. Wright agreed to do it.

As for the feasibility of a fully affordable residential tower at the World Trade Center, Fariello said, confidently, “It is entirely possible. What it takes is political will.”

However, she noted, “When the community said that we want a 100 percent affordable World Trade Center, some electeds just laughed.”

In general, she said more outside-the-box, creative thinking is needed in terms of development and affordable housing.

“Politicians and developers look at New York like a Legoland — that they can just knock down and build,” she scoffed. “It’s a playground for them.

“Developers [think they have] have to make a ton of money — it’s not enough to make a profit,” she said, disdainfully. “They’ve gotten so much already.”

Asked if she is refusing to take campaign contributions from real estate developers, she said no — because she hasn’t been offered any.

“I haven’t had to [decline them],” she said. “I’ll cross that bridge if it ever comes.”

She has also consistently stood with parents and residents fighting the construction of the 250 Water St. project by the Howard Hughes Corporation. Opponents say construction of the South Street Seaport-area tower would expose children in several adjacent schools, as well as neighboring residents, to toxic mercury because the site was once home to a major thermometer factory.

“This has been going on for five years,” Fariello said of the committed struggle to stop the Hughes project.

She first got into politics when Caroline Laskow, a district leader with the Grand Street Dems, reached out to tell her there was a vacancy for a district leader position in Lower Manhattan. Fariello was elected, becoming co-district leader with Paul Newell, who ran against former Assemblymember Sheldon Silver and also later in the special election six years ago to fill the fallen Silver’s seat that was by Yuh-Line Niou.

In addition, Trump had also inspired Fariello to start becoming more politically active, as was the case for many who found themselves horrified and wanting to do something.

But, before then, Fariello had to make the decision whether to remain here. After the 9/11 attack, she and her family — her husband is also a lawyer — could have easily fled Lower Manhattan, as some chose to do. They lived three blocks from the World Trade Center site. She was in law school at Cardozo the time. In the end, the choice wasn’t hard.

“My husband and I chose to stay Downtown and be part of the rebuilding,” she said. “I never thought of leaving — I never thought about it much. We were young, just married.”

Although a staunch critic of the Chinatown “megajail” project, Fariello firmly believes that Rikers Island should be shut down.

“Absolutely, Rikers should be closed,” she said. “We should not be incarcerating so many people. I think the right has done a really good job of blaming crime on bail reform.” The candidate added, she has not seen “anything more than coincidence” linking New York City’s recent spiking crime rate to the bail reform enacted a few years ago.

Kavanagh also opposes any rollback of bail reform. Though Souza Egorov strongly feels that it’s to blame for the city’s crime surge.

However, instead of demolishing “The Tombs” and building a new, larger jail on the same site, Fariello said, “We can certainly renovate the jail that is there now.” Two other existing Manhattan jails could also be used to assist in Rikers closure plan, she added.

But Chinatown simply cannot and should not have to bear the brunt of a huge, disruptive project like the “megajail,” according to Fariello.

Although the city says renovating “The Tombs” is impossible, even dangerous, Fariello insisted, “That can be done. It comes down to political will.”

In short, she stressed, she is not afraid to buck the system — and has proven this, for example, in the way she challenged and reformed the way the Democratic Party in New York chooses its candidates for special elections.

In general, she said, she likes “to stand up for justice — and those without a voice” and supports the idea of “a fair playing field.”

“I have a passion for affordable housing and for healthcare,” she said. “What really triggers me is when people abuse their power — and the lack of using power for good.”

It’s not surprising that she has wound up in civic life.

“When I was a kid, I wanted to be a lawyer or a journalist,” she noted.

However, when she was attending the University of Wisconsin at Madison, a professor, noting how many poli-sci classes she was taking, steered her toward politics, causing her to switch her major.

After getting her law degree at Cardozo, her first job was with ACORN in New York City. Her work there focused on then-Mayor Rudy Giuliani’s Work Experience Program a.k.a. WEP, which forced some welfare recipients to work in order to receive benefits.

She next moved on to the city’s Department of Buildings as a fraud inspector in its Buildings Inspection Unit, handling cases involving bribery and oversight of expediters.

Fariello claimed that as she’s been out campaigning in Lower Manhattan — and also in Brooklyn, when part of it was still in the district before the recent redistricting — she found “the majority” of voters she spoke to did not actually know who their state senator was.

Asked if there was anything good she could say about Kavanagh, she paused for a moment, then said, “I actually like him as a person. And, you know, he is smart. … I think he’d be a great professor.”

Meanwhile, the person whose opinion matters most to Fariello thinks she would be a great state senator. When she broached the idea of running for the seat to her husband, he was all in on it.

She recalled, “He said, ‘Honestly, I don’t know why you’re thinking about it. I think it’s perfect for you.’”

Kavanagh’s campaign did not respond to a request to do a similar profile article about him.