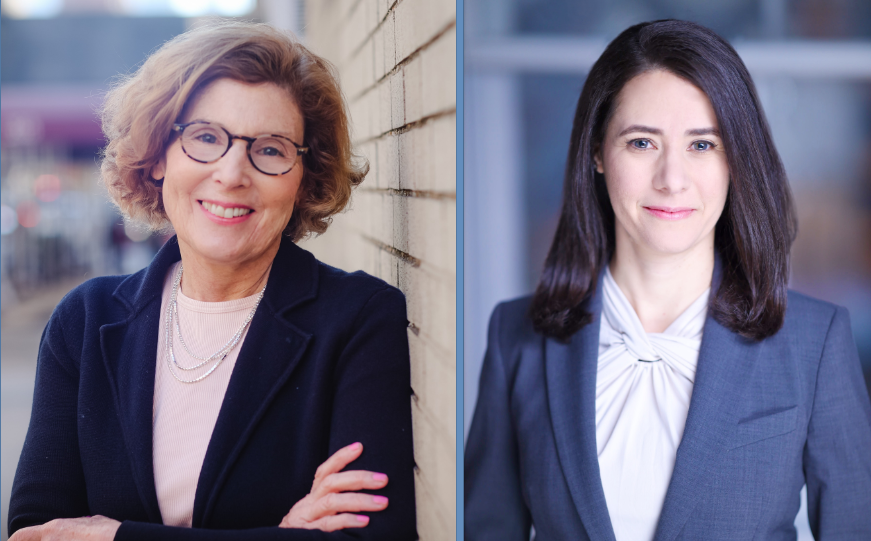 BY MARIA DANZILO AND DANYELA SOUZA-EGOROV | As candidates for New York State Senate in adjacent districts covering most of Manhattan’s West Side and Downtown, our platforms reflect the issues of greatest concern to voters today: escalating crime, an unsteady and stalled economy, underperforming public schools, government failure to address homelessness, mental illness and drug addiction, and degrading quality of life.

We have been speaking with voters in all corners of our districts, and there is strong agreement on what people want now: safe and clean streets, a decent quality of life, restoring New York’s economic future, good schools and real solutions to homelessness and mental illness. Voters see with their own eyes the deterioration of our beloved city. They are fed up with out-of-touch politicians not hearing what people want, and they do not want to be told that the problems they see happening are not real or that crime is not real. Our fiercest advocates and allies are the crime victims themselves. Their voices are loud and clear that change is desperately needed.

Sitting state Senators Brad Hoylman and Brian Kavanagh, against whom we are running, supported the contentious bail and discovery laws adopted in 2019.  These so-called “reforms” have contributed to the rise in crime and other consequences.  Even Congressmembers Jerry Nadler and Carolyn Maloney have called for changes to the laws.

But the sitting senators are not interested in exploring ways to make these laws better. We are. We want to amend bail law to allow judges to make the decision whether a person accused of a crime is dangerous — like every other state in the country. We want to amend the discovery rules, which many have called misguided and overly burdensome on law enforcement, creating so much additional paperwork under strict time pressures to make it difficult for police officers to do their jobs providing public safety for communities. We want to expand help for the mentally ill and to hold homeless services providers accountable, and so much more to restore our city.

Our leaders show a lack of concern and coldhearted tolerance for how laws that they have supported have negatively impacted communities. New Yorkers from all parts of our districts and from all backgrounds are suffering while the indifference of leaders reaches new heights. It seems as if no matter how horrible or heinous the crime, no matter how terrified someone feels, no matter how many crimes could have been avoided, our leaders resort to denial and gaslighting and then double down on refusing to fix the laws that need to be fixed.

New Yorkers are fed up, and rightly so. As ridiculous as this may sound, elected leaders refuse to believe that the real victims of the crime epidemic are actually the victims of crime. The tolerance for mayhem has led to an unprecedented increase in gender violence and discrimination that is setting back decades of progress.

We are deeply bothered by the Supreme Court’s decision in Dobbs and its devastating impact on abortion access. The deserved uproar over Dobbs stands in sharp contrast to utter silence over the fact that failed policies have jeopardized the safety, economic security and well-being of women. This silence has brought into sharp focus just how far down society has fallen in protecting women and all victims. As women running for public office, it is time we call out this hypocrisy. Stop appropriating the violation of a woman’s right to choose for political gain while at the same time passing laws that put women’s lives, and the lives of so many New Yorkers, at risk.

In New York City, rape and sex crimes are up an astonishing 18 percent year over year. Recently, we spoke to many female residents of a dense public housing complex in Chelsea. Residents told us the hallways and stairwells were dangerous and that entering and exiting their building can be terrifying. Parents expressed concern about their children’s safety. Elderly residents throughout the district echo these fears. Hell’s Kitchen has become treacherous, especially along certain avenues and side streets filled with drug users and dealers, as the proliferation of methadone clinics far exceeds the neighborhood’s “fair share” of these facilities.

Recently there has been a string of terrifying sexual assaults, one of which occurred outside of Maria’s building, where after assaulting the victim, the attacker fled on an electric bike and committed a second assault, in Danyela’s district, near to her home. Two separate strings of related attacks by sexual predators spanning several months received the barest of media coverage. We have not seen any press conferences or public outcry from any of the members of the New York City Council or the New York State Senate, even though we are in the midst of a crime wave that has created a hostile and frightening atmosphere for all New Yorkers, and particularly the most vulnerable, and those who live in high-crime areas or must use public transportation during off-hours.

As pointed out by Rafael A. Manual of the Manhattan Institute, a minimum of 95 percent of shooting victims are Black or Hispanic, even though these two groups do not constitute anywhere near 95 percent of the city’s population. There is no doubt that failed policies from incumbents in control of New York State’s criminal laws have had the most corrosive effect in communities these laws were intended to protect

While we must restore public safety for every New Yorker, too often women, the elderly, children and others who appear more vulnerable are the victims of crime. Hate crimes in the Jewish, Asian American and L.G.B.T.Q.+ communities have skyrocketed. Asian-American crimes, for example, had a 260 percent increase in 2021 and there have been staggering increases in anti-Semitic hate crimes and L.G.B.T.Q.+ hate crimes.

Nationwide, as reported to Stop AAPI Hate, women were the victims in 68 percent of the 3,800 anti-Asian hate incidents between March 2020 and March 2021. Hate directed at Asian women is also a local trend, as evidenced by high-profile incidents, such as the murder of Christina Yuna Lee and the killing of Michelle Go, who was pushed in front of an oncoming train, and the arrest of a homeless man charged with a string of unprovoked attacks on women of Asian descent in seven different neighborhoods.

Michelle Go’s killer was deemed mentally unfit to stand trial, an accusation of our failed mental health system, which limits the ability of hospitals to retain people for treatment, even when they are likely to be dangerous. We support expanding the reach of Kendra’s Law to treat those who are a danger both to themselves and others, and we support the removal of the exclusion for I.M.D. (“institutions for mental disease,” i.e., psychiatric hospitals) funding, which would require federal Medicaid to cover in-hospital treatment. Our opponents have had years to address these issues in Albany, and they have not. We will get it done.

Unsafe streets and transit also risk the safety and economic well-being of so many working New Yorkers. Terri Eagle, the C.E.O. of Morilee, a New York-based, women-owned bridal couture business on W. 39th Street, which employs more than 15 highly skilled females, said her staff are “terrified on a daily basis.” She added that the street is so drug-infested and filthy that her workers are “frightened to come and go to and from work.” Drug dealing takes place outside the building, and hypodermic needles and other drug paraphernalia are routinely found inside the building and on the ground. Her workers have been screamed at, and there have been instances of threatening behavior, such as banging on their front door to gain entry. The police have been disempowered by bail laws and other laws to do their jobs.

We have pushed back the clock more than 100 years when female garment workers are afraid for their lives when they go to work. This location is in the heart of Manhattan’s commercial district. Businesses’ workers will not return to the office if the conditions are not safe for them. We must restore safety to our streets. If our commercial centers cannot recover, the livelihoods of millions of people are at risk. This will have dramatic local, regional and national societal implications.

New Yorkers need and want leaders who will hear their concerns and will act to address them and restore public safety and New York’s economic viability. We are those leaders.