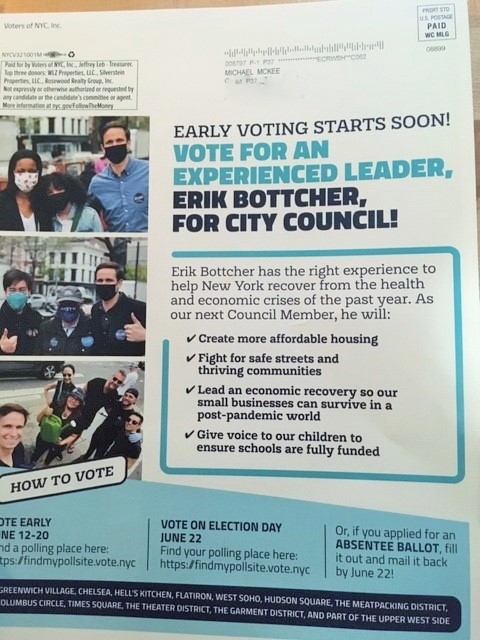 A mailer that was sent out in support of Erik Bottcher by a super-PAC called Voters of NYC, which is mainly funded by big real estate.

BY LINCOLN ANDERSON | Let’s “unpack” this… .

Erik Bottcher’s five City Council District 3 primary election opponents are furiously piling on the front-running candidate after a real estate super-PAC paid for a mailing on his behalf.

But Bottcher, for his part, is slamming the PAC, saying he does not want its support and demanding that it “halt all spending immediately.”

Meanwhile, in an unusual twist, a leading tenant advocate and Bottcher ally claims the real estate PAC actually wants Bottcher defeated, fearing him above all the other contenders. The pro-Bottcher mailer, the supporter maintained, is really a convoluted ruse designed to stoke District 3 (Greenwich Village, Chelsea, Hell’s Kitchen) residents’ anti-development passions, turning them against the leading candidate.

The mailer in question, which cost $13,000, was paid for by a group called Voters of NYC, a super-PAC funded mainly by big real estate interests. In addition to Bottcher, the group reported spending in support of five Council candidates in other districts.

Meanwhile, an affiliated super-PAC, Common Sense NYC, mainly funded by developer Stephen Ross and billionaire Ron Lauder, reported spending in 22 Council races, both for and against candidates. This latter group, for example, put out a mailer against Christopher Marte in District 1 in Lower Manhattan but one for Julie Menin in District 5 on the Upper East Side, again, each mailer costing around $13,000.

Common Sense NYC, a super PAC funded mostly by Stephen Ross and Ron Lauder, has reported spending in 22 Council races – some for, some against. pic.twitter.com/oV3l3yXSJW

All six candidates in the District 3 race reportedly had promised not to accept any real estate or corporate PAC money.

Although, under campaign finance laws, candidates have caps on how much their campaigns can spend, PACs are not limited by spending rules. As a result, they are, in some cases, accused of wielding overly large influence on elections.

“Big Real Estate’s message to the voters of District 3 is clear: Their candidate is Erik Bottcher,” the candidates’ joint statement said. “Their mailing arrived in voters’ mailboxes today. This PAC’s donors are real estate mega-developers, such as Silverstein Properties and Rosewood Group.”

“The fight for affordable housing is one of the most important missions of my life,” LaFargue said. “I thought that everyone in this race shared that vision. Unfortunately, I was wrong.”

“It’s both disappointing and disturbing to see,” Boghosian Murphy said of the super-PAC’s pro-Bottcher mailer. “Voters trust us to be transparent about our plans and priorities. That trust is extremely important to me and we as candidates must show we’re worthy of it.”

“Erik Bottcher does not care about working New Yorkers,” Fitzpatrick charged. “How do we know? He says he ‘will not accept contributions from real estate developers.’ But the reality is he is perfectly O.K. with outside corporate real estate money being used to further his campaign, rather than standing up for those in our district who desperately need more affordable housing.”

The contentious mailer touted Bottcher as “an experienced leader.”

However, Schwartz said, “His experience has done nothing for rent-stabilized tenants being squeezed out and folks in NYCHA housing, whose buildings only deteriorated more during Bottcher’s time in city government.”

Halasa declared, “Everyone in the district who laments the luxury development land grab, gentrification and the crisis of small business closures needs to understand that Erik is responsible.”

Bottcher, though, released his own statement, saying he didn’t ask for the PAC’s support, nor does he want it.

“I denounce this independent expenditure and I am calling on its funders to halt all spending immediately,” he said. “This isn’t something I’ve asked for, it’s not something I know anything about, and I want it to stop. From day one, our campaign hasn’t accepted a dime from real estate developers, anyone who works at a lobbying firm or corporate PACs. We are a grassroots campaign, powered by local residents. There is too much big money in politics. That’s something I’ve fought against for many years. That is why I strongly support repealing the Citizens United court decision — either by judicial reversal or a constitutional amendment. This kind of outside spending is harming our country.”

In the Citizens United decision of 2010, the U.S. Supreme Court ruled that the First Amendment prohibits government from restricting independent (or “outside”) expenditures on campaigns — as opposed to direct campaign contributions — by corporations, billionaires and PACs.

Longtime tenant advocate Michael McKee, the treasurer of Tenants PAC, rallied to Bottcher’s defense. McKee, a Chelsea resident, pitched the idea that developers actually fear the candidate and that the mailer saying to vote for Bottcher was, in fact, intended to get people to do just the opposite. At the same time, he noted that Tenants PAC has endorsed three of the six candidates, including Bottcher, that Voters of NYC is supporting.

“I think that they’re actually trying to hurt these candidates by saying that they’re in the hip pocket of real estate,” McKee contended. “Because they know that Erik is not going to vote for [their projects]. They don’t want Erik. It’s really insidious, it’s destructive,” he said of this allegedly deceptive strategy by the super-PAC, as he described it.

“In this district, it would be very damaging” for a candidate to be perceived as favorite of big real estate, McKee noted.

The mailer notes, in fine print at its top left corner, its top funders. They are all real estate organizations.

“I don’t think any one of the candidates running [in District 3] would be pro-development,” McKee said. “But any one of them would be less effective than Erik. I can’t imagine why they would do otherwise,” he said of his theory of the super-PAC’s mailer actually being a deceptive anti-Bottcher device.

McKee said he spoke to Bottcher on the phone about the mailer and counselled him: “I said, ‘Don’t let it throw you. This is what the real estate lobby does.'”

“I’ve worked with Erik Bottcher for years,” he said. “In 2015 he got arrested with 15 of us sitting outside Andrew Cuomo’s office protesting vacancy decontrol. This is someone who has worked his entire career against the real estate lobby.”

McKee noted that eight years ago, the Real Estate Board of New York, similarly did mailings on behalf of candidates it felt were pro-real estate, among them Margaret Chin. The current super-PAC mailings in this primary election are coming very late in the game, right as early voting has started and less than two weeks from the primary. But the mailings in 2013 came earlier in the election cycle and Chin kept resisting calls to renounce REBNY’s support and denounce the mailings.

“We went through this eight years ago,” McKee recalled. “I think 21 of the councilmembers were term-limited. There will be even more turnover in the Council this election. REBNY set up [the PAC] Jobs for New York and spent something like $5 million, more than what’s being spent now.”

Tenants PAC would not endorse Chin in 2013, McKee said, because she would not make a statement condemning Jobs for New York’s independent expenditure on her campaign. Candidates are actually not allowed to be in direct communication with the PACs.

“She said, ‘I can’t control what they do,'” McKee said. “I said, ‘Margaret, that’s not the question. Are you going to put out a statement telling them to stop?’ We interviewed Jenifer [Rajkumar, Chin’s Democratic primary opponent] but we decided to stay neutral.

“She’s been good on rent protection but she’s been terrible on development,” McKee said of Chin. “She supported every type of skuzzy development scheme — the N.Y.U. expansion plan and she supported the demolition of that historic building [on the Bowery] and they put up an office building.”

Meanwhile, John Fisher, who runs the Web site TenantNet, called on Bottcher to withdraw from the race.

“Early in the campaign, Bottcher said he was not bought by real estate interests…” Fisher said. “Clearly, this was a big lie. He should immediately withdraw from the race and let the remaining candidates compete in an honest and transparent manner.”

In addition, Christopher Marte, running in District 1, was targeted by the Common Sense NYC super-PAC, whose recent mailer tries to paint him as soft on crime. The mailer quotes a statement, reported by The Village Sun, that he made about defunding the police during a candidates forum last October hosted by Downtown Independent Democrats. The mailer, quoting a statement reported by Tribeca Citizen, also claims Marte “supports closing all jails.”

Marte responded to the mailer in a statement, saying, “It’s actually Stephen Ross who is too dangerous for the City Council. We cannot let the chairman of Related Companies determine the future of our Council district. If he is choosing to spend his money against our grassroots campaign, it’s because he knows I will never let him convert his recently purchased Section 8 buildings into luxury housing. To have one of Trump’s biggest supporters attacking our campaign should be a signal to voters that I am the only candidate running as an actual Democrat, committed to fighting for working people, safer communities and affordable places to live.

“The mailer sent by Ross’s super-PAC spreads lies about my positions and tries to make voters afraid,” Marte said. “Everyone knows that I fully support not building a new jail in Chinatown, but Ross tries to make this seem like a bad thing. In forums I have mentioned that the N.Y.P.D. should not have million-dollar robot surveillance dogs, and that we should use funds to make sure E.M.S. workers make above the minimum wage, as they respond to many crises in our communities.

“Every candidate in this race has called for N.Y.P.D. reform, but I am the only one Ross is targeting because we threaten his personal wealth, which he, in turn, uses to donate to Donald Trump and many far-right causes. He knows that what this campaign represents is powerful, and it will be the end of his plans to force out long-term tenants and small businesses, and turn Lower Manhattan into the next Midtown.

“I hope that voters will keep in mind my long track record of standing up for vulnerable people, advocating for safe streets, and investing in our neighborhoods, and are not fooled by Ross’s baseless attack.”

Sean Sweeney, for one, a leading member of D.I.D., said the PAC is targeting Marte because he is the front-runner in the District 1 race and the developers see him as a threat. D.I.D. overwhelmingly endorsed Marte last October.