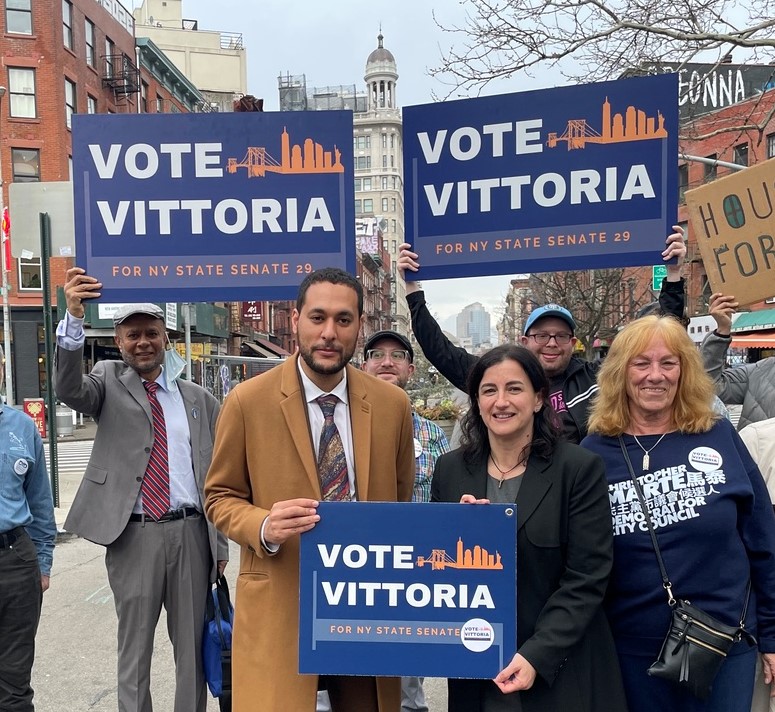 Christopher Marte, who represents Lower Manhattan's Council District 1, has thrown his support behind Vittoria Fariello for state Senate. The two held one of Fariello's campaign posters at the endorsement rally on Thursday. (Photo by Dashiell Allen)

BY DASHIELL ALLEN | Praising her “commitment to the urgent needs of her future constituents,” Councilmember Christopher Marte endorsed Democratic District Leader Vittoria Fariello for state Senate in the 29th District.

“I’m supporting Vittoria for state Senate because she unequivocally stands with the working people of Lower Manhattan,” Marte said in a statement. “I’ve been with Vittoria on picket lines and at protests where the targets are large organizations with big political reach. But Vittoria doesn’t waver from a fight.

“She is the partner we need to end the 24-hour workday for the thousands of home attendants that live and work in our district, and the advocate we deserve to close the loopholes in our labor laws that let bosses get away with wage theft and leave immigrant families without justice.”

The 29th District includes Lower Manhattan from the Battery up to Stuyvesant Town and Soho. Due to redistricting, it no longer also contains the “Brooklyn waterfront” neighborhoods between Cobble Hill and Greenpoint, including South Williamsburg.

Fariello, who was a strong supporter of Marte’s City Council campaign last year, is hoping to unseat incumbent Brian Kavanagh, who was elected in 2017 in a special election. Also in the race is current Assemblymember Yuh-Line Niou.

“I am truly honored to have earned the endorsement of Councilmember Christopher Marte, who has tirelessly spoken up and fought for the people of Lower Manhattan,” Fariello said.

“Chris is a leader that is both a uniter and a fighter for all of our communities. He is a leader who shows up, listens and gets things done. I am grateful for his support.”

A public service-oriented lawyer, Fariello has also been endorsed by the Grand Street Democrats and Downtown Independent Democrats.

Kavanagh has also received a slew of endorsements, including from Coalition for A District Alternative (CODA), state Senator Brad Hoylman and Councilmembers Gale Brewer and Erik Bottcher.

While the newly drawn district lines had appeared to be set in stone, a Republican lawsuit charging partisan gerrymandering by the Democratic majority won a favorable ruling from a New York State judge, potentially threatening to upend the upcoming June 28 primary. Governor Hochul plans to appeal the judge’s decision.