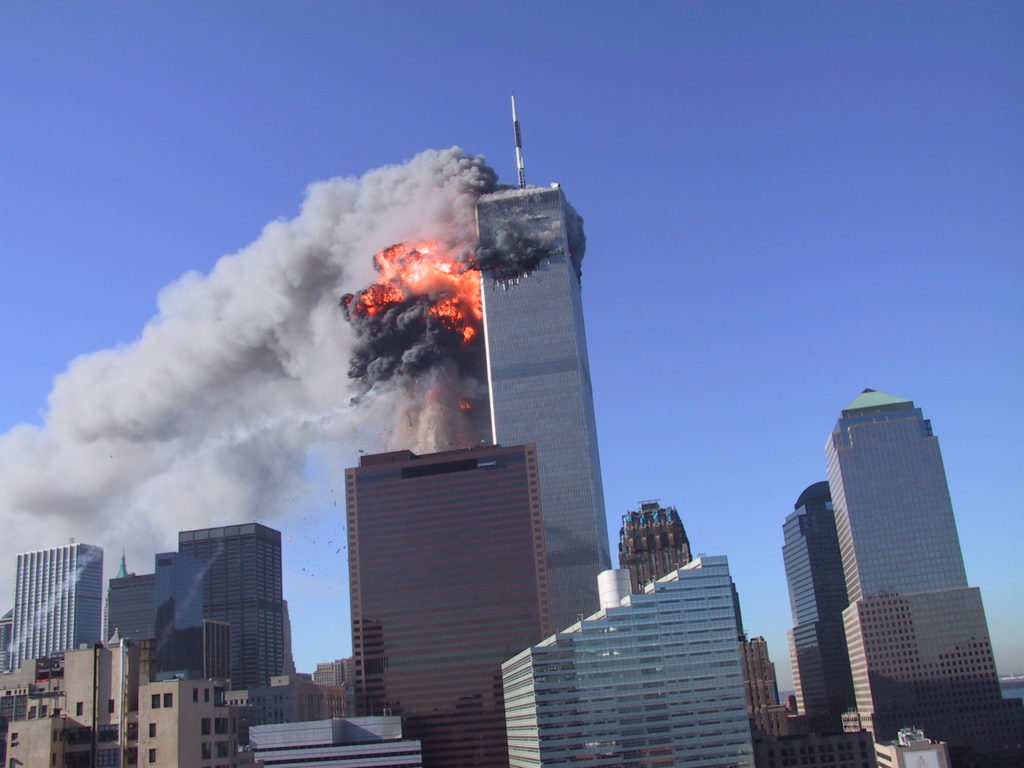 Smoke and flames spew from 1 World Trade Center, the North Tower, just after the first plane hit on 9/11. (Photo by Richard Corman)

To commemorate the 20th anniversary of the 9/11 attack on the World Trade Center, Village Preservation has released nearly 1,000 images donated to it by the public.

Earlier this year, Village Preservation asked people to share their images connected to the World Trade Center, the attack and the aftermath, and received hundreds of images from multiple individuals.

One collection of photos is by Richard Corman, the current president of the Downtown Independent Democrats. From his roof at 335 Greenwich St., less than a dozen blocks north of Ground Zero, Corman documented the horrific destruction of the World Trade Center and conditions in the surrounding area in the days following 9/11.

Pro photographer Robert Ripps also documented the 9/11 attack, as well as its aftermath, like the poignant “missing” posters that cropped up all over Downtown, including on a wall outside the former St. Vincent’s Hospital, at 11th Street and Seventh Avenue South.

A photo collection donated by Villager Lenore Mills documents how she and her neighbors, plus out-of-town volunteers, gathered on the corner of Christopher and West Street sin the days and months after 9/11 to cheer on the rescue and recovery workers traveling to and from Ground Zero via the West Side Highway. The group stood there every day until the last beam was removed from Ground Zero in May 2002, and on each anniversary of 9/11. In 2002, the group even took a trip to Shanksville, Pennsylvania, where one one of the hijacked jets on 9/11 was downed.

After the horrific attack, Greenwich Village resident Lorrie Veasey, owner of the Our Name is Mud ceramic studio, created tiles of American flags, doves and angels and hung them on the chain-link fence surrounding Mulry Square, then a Metropolitan Transportation Authority parking lot across from the former St. Vincent’s Hospital in Greenwich Village. Her installation became a community message board to support the attack’s victims, and created a space for their loved ones to grieve, support and comfort each other.

The original installation hung for 10 years at Mulry Square, at Seventh Avenue South, 11th Street and Greenwich Avenue, but by 2011 when Village Preservation staff documented their condition, time had taken its toll on the fragile tiles. Several were stolen, broken or missing, and, in August 2011, Hurricane Irene was barreling toward New York City, threatening to destroy them completely.

Local resident Dusty Berke and neighbors took the tiles down to safeguard them, then that September rebuilt the memorial. Jim Power, the “Mosaic Man,” donated a planter at the corner of Seventh Avenue South and Greenwich Avenue. A “Love Bench” was also installed.

However, the memorial was threatened again later that year when the M.T.A. announced plans to build an emergency ventilation substation on the site. The M.T.A. agreed to create a permanent home for the memorial, incorporating it into the design of their new structure. In 2016, the M.T.A. structure (which looks like a building facade) was completed and the tiles were reinstalled permanently.

A photo collection from Louis “Sonny” DeLuccy documenting the post-attack demolition at Ground Zero was also donated to Village Preservation. DeLuccy was born and raised behind the courthouses on Baxter Street in Little Italy.

After traveling the world, De Luccy returned home, settling on Bleecker Street. Just days after the attack on the World Trade Center, he joined the Ground Zero effort.

He supervised a repair team at the American Express building on Vesey Street for more than a year, working long hours in the dust and debris. DeLuccy succumbed to lung cancer in 2004.

The photographs in DeLuccy’s collection were taken by workmen with whom he worked to share with fellow hard hats, distributed among themselves to follow their progress.

The collection was donated by his wife, Village actor, artist and writer Beverly Wallace.