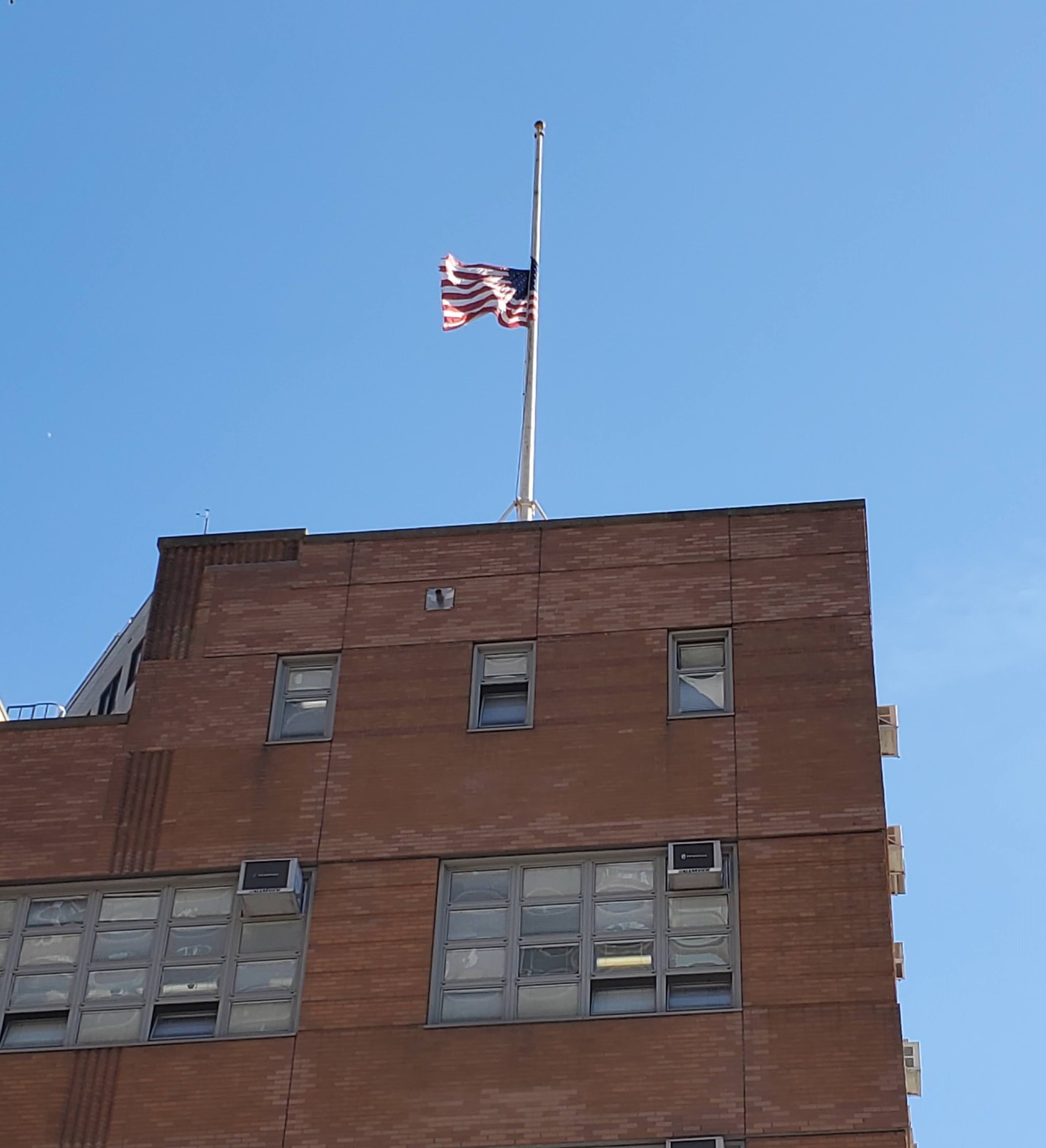 The flag flew at half mast at the Veterans Affairs Hospital on E. 23rd Street at First Avenue on Oct. 21, three days after the death of Colin Powell at age 84 of COVID-related complications. (Photo by The Village Sun)

View from the park bench: Reflecting on Colin Powell

BY LEONARD QUART | Sitting in Washington Square Park during a chilly, but bright and breezy autumnal day, I watch a procession of people go by. Some are characters I recognize from other days in the park: a man with a cart loaded with bad paintings he tries to sell, a homeless man who talks to himself in Spanish and never says a word to anyone else. But other people are not quite as recognizable: a women talking loudly about her medical problems to no one; an accordion player, trombonist, and drummer who are park regulars; countless students.

There are also innumerable people walking dogs, nursery school classes held together by a long tape with which their teacher guides them, bocce players leisurely throwing balls, and a middle-aged man working out by boxing with a trainer.

On this day, the air is clean, the park feels at peace for the moment, and the disparate nature of the people who are part of the park’s fabric exhilarates me. That is, except for the homeless (many of them in the park are addicted), who I feel some compassion for, but much more irritation than empathy. I take no pride in my having little tolerance for their constant begging and aggressive wheedling. I do that, knowing solutions to the problems of homelessness are difficult to accomplish, and that most of these individuals face lives that are dead-ends.

While observing daily life in the park, I reflect on the death of Colin Powell, which strangely stirs me. It may be because I have memories of him at City College in the Reserve Officers’ Training Corps and as a member of their drill team, the Pershing Rifles. It’s a world that I had nothing to do with; nobody I knew was a member of the ROTC, and we were all anti-military. But he was one of two Black members of the very white ROTC, and I was interested in what shaped him.

I discovered later he went to the same South Bronx high school my father did, and lived about three miles from my house, in a slightly poorer neighborhood. In public, he always emanated integrity, decency and reflectiveness. But it’s hard to forget and forgive him making the case for the invasion of Iraq at the United Nations Security Council. Powell had the grace to feel remorse and was haunted by the decision. But this good, pragmatic man, a gifted statesman and general, still could never quite expunge that act.