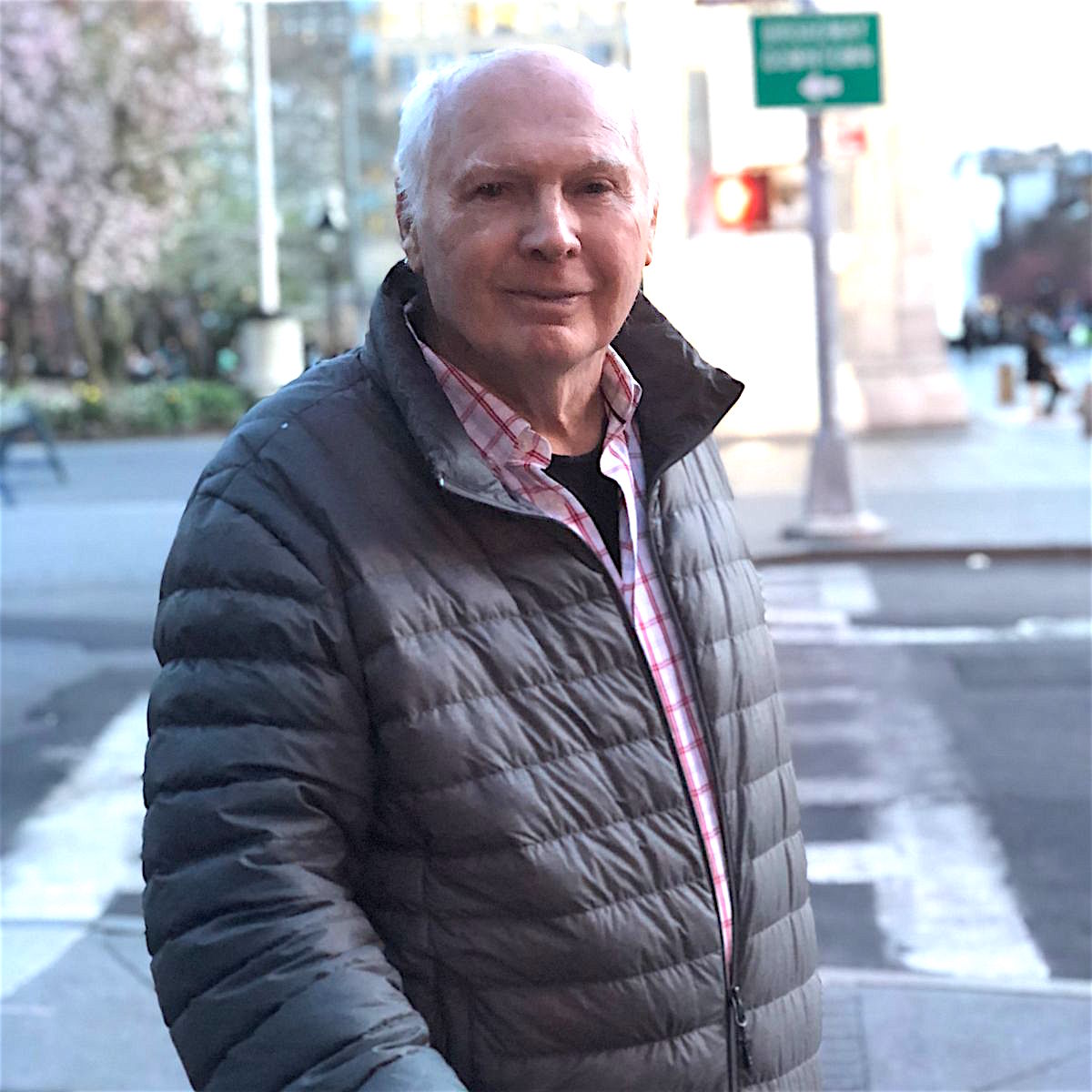 BY LINCOLN ANDERSON | Updated Aug. 11, 12:45 a.m.: Tom Connor, a Village senior advocate and Community Board 2 member who was active in two local political clubs, died on Thurs., Aug. 6. He was 88.

The cause of death was not coronavirus, according to a friend who requested anonymity.

Connor was a longtime resident of 39 Fifth Ave., between 10th and 11th Sts., since at least the 1970s and possibly as early as the ’60s. He grew up in Long Beach, Long Island. He was a social worker.

Connor was a member of Greenwich House’s Center on the Square for more than 20 years, serving as president of its advisory council for 15 of those years. On the political front, he was a member of both the Village Independent Democrats and the Jim Owles Liberal Democratic Club.

Laura Marceca, director of Greenwich House’s Center on the Square, remembered Connor as a “pioneer” of the senior center.

“Tom was part of the family at Greenwich House, Center on the Square,” she said. “In addition to his role as president, he served as the chairperson of many committees, including Meals, Advocacy and Trip.

“Tom was involved with the day-to-day operations of our senior center, always there to assist seniors on a variety of issues, including social action,” she said. “He was a strong advocate for seniors’ rights. Tom always maintained an active role with the [New York City] Department for the Aging and their involvement with the senior centers.

“He enjoyed going on day trips with the group, especially our yearly trips to Fire Island, and always looked forward to the BBQ on the patio.

“Tom was a very special part of the center and was instrumental in setting up the systems we use today,” Marceca said. “Tom Connor was a pioneer of the senior center, and will be missed tremendously and never forgotten.”

Connor was appointed to the all-volunteer C.B. 2 by City Councilmember Margaret Chin. He served on two of its committees, Liquor Licensing S.L.A. 1 (the board has two S.L.A. committees due to the district’s volume of liquor-license applications) and Social Services.

The board covers the area west of Bowery/Fourth Ave. between 14th and Canal Sts.

Carter Booth, the community board’s current chairperson, recalled Connor as a committed member who “spoke from his heart.”

“Tom shared with me many times how much he enjoyed serving on C.B. 2,” Booth said. “He was a staunch advocate for the causes he believed in and he wasn’t shy with his opinion, especially when he felt something was unjust. Tom spoke from his heart and often surprised us with his take on a situation.

“He rarely missed C.B. 2 meetings and usually that was to attend V.I.D. meetings,” Booth noted. “Being in the Village and a member of C.B. 2, not everyone agreed with him all the time, but that did not stop him from sharing his wit and one-liners with all of us.

“We will miss Tom very much for his passion and as someone who reminded us through his actions of our community’s roots and obligations to the many causes and movements that he was a part of shaping and his ability to connect that to today’s world.”

Connor always took a stand on positions affecting seniors — even when it put him at odds with his fellow board members.

In October 2015, for example, C.B. 2 passed an “emergency resolution” in support of saving the Elizabeth St. Garden and opposing a city-sponsored senior affordable housing project slated for the site. The vote was 40 to 4 for the resolution, with Connor one of the few dissenters.

“The way the pope said today — you have to listen to your conscience,” he said at the time, explaining his “no” vote.

In 2018, Connor was involved in a flap over a contentious license application that saw him abruptly removed from the Liquor Licensing SLA 1 Committee. Connor was more pro-nightlife than some on the committee — plus, he admitted to having difficulty hearing due to the acoustics of the church basement where the meeting had been held. In the end, Chin and Manhattan Borough President Gale Brewer advocated for Connor to be reinstated to the committee, and eventually he was.

The Village Independent Democrats posted an obituary on Connor on their Web site, noting, “V.I.D. has lost another treasure.” (Two other veteran members of the club have died this year, Yvonne Sherwell and Ellen Peterson-Lewis.)

In the V.I.D. post, Jonathan Geballe, a former V.I.D. president and also a fellow C.B. 2 member, expressed his respect for Connor’s contributions.

“Tom was a champion for senior rights and needs,” Geballe said. “I learned something so important from him: that in meetings we had to be patient — and loving — with people who perhaps did not hear as well or had a different angle.

“A favorite of Tom’s was the need for more benches at bus stops and intersections to give a place to rest for disabled and seniors,” Geballe recalled. “Such a simple, inexpensive fix, and so easy for most of us to be blind to, as we hurry about. But so important to those who need a temporary resting spot.

“Tom was ready to raise his voice whenever, so there was also something to learn in courage and determination, all the more so if he was the only voice who saw that need and spoke for it.”

Former District Leader Keen Berger recalled of Connor, “His opinions were always important and genuine, always something I needed to hear, especially when I didn’t agree!”

Another aspect of Connor’s identity was as a gay activist. Allen Roskoff, president of the Jim Owles Liberal Democratic Club, paid tribute to Connor’s courage on that front.

“Part of Tom’s legacy is that he was openly gay at an early age when few people were,” Roskoff said. “And he stood up for his and the community’s rights always. He was a solid progressive and he deserved to be called one. I am certain that our members will miss Tom.”

Erik Bottcher, chief of staff for Council Speaker Corey Johnson — whom Bottcher is running for election to succeed — recalled Connor as a very colorful character.

“Tom spent years of his life working for seniors and for his community,” Bottcher said. “Also, Tom was a character. When he stood up to speak at meetings, you had no idea what would come out of his mouth. Whether you agreed with it or disagreed with it, it came from a good place, and it was never boring. He would come hang out on our patio after V.I.D. meetings. His one-liners were often cringeworthy, but they made everyone laugh. I wish I wrote them down.”

District Leader Arthur Schwartz, like Bottcher, is a member of V.I.D. and is also running for the District 3 City Council seat.

“He supported me when I ran against [Assemblymember] Deborah Glick in 2016,” Schwartz added. “He was very supportive of me running this year. Tom was definitely within my brand of political activist.”

In addition to Connor’s being an activist, V.I.D. members quoted in the club’s obituary on him remembered him as both a mentor and friend.

“Tom was a fastidious, spiffy dresser,” said Lois Rakoff, a fellow V.I.D.’er and C.B. 2 member. “He had a great collection of shirts. When I invited him to a Washington Square Music Festival benefit concert in the music school’s garden on Barrow St., he wore an ascot and blazer. Till the very end, Tom cut a noble and striking figure.

“Tom’s opinions were honest and heartfelt,” she added. “He was always the social worker (MSW) in thoughts and deed! We often walked and talked on our way home together after various committee meetings. It’s hard to think of the Village without Tom.”

Kathy Slawinski, also of V.I.D., met Connor through the political club and a friendship blossomed.

“Tom was a good friend for at least eight years,” she said. “I met him at V.I.D. and he’s responsible for making me a member and an officer. In an effort to enhance my involvement in the club, Tom nominated me for recording secretary, a position I still hold. When he realized I had to actually do some work, he apologized! I said not to worry, I was happy to do it.

“We went out after meetings for a drink and a bite, and an opportunity to gossip about the club and politics,” Slawinski continued. “The Wine Cellar on Eighth St. eventually became our haven. When he was stronger, we went out to events together — he was great company. In recent years, after a series of misadventures, he became more debilitated, but we were definitely in touch. I’m still feeling the urge to call him and discuss the latest news and the latest gossip. He also enjoyed voicing his own opinions on the news of the day, and I miss that.”

Tom Connor is survived by a brother, who lives out of state, and his niece, Melissa Connor, who lives in Battery Park City and was close to him.

V.I.D. and the Jim Owles club will co-sponsor a Zoom memorial for Connor on Wed., Aug. 19.

According to Marceca, Greenwich House’s senior center will host a memorial on Sept. 23, at 7 p.m.

In addition, Greenwich House has developed a fund in Connor’s memory, the “Tom Connor Activities Fund,” for use at Center on the Square. Money raised in this account will be used for special activities to enhance the well-being of the seniors, including trips, events and various programs.

For more information on the fund and to make a donation, click here.