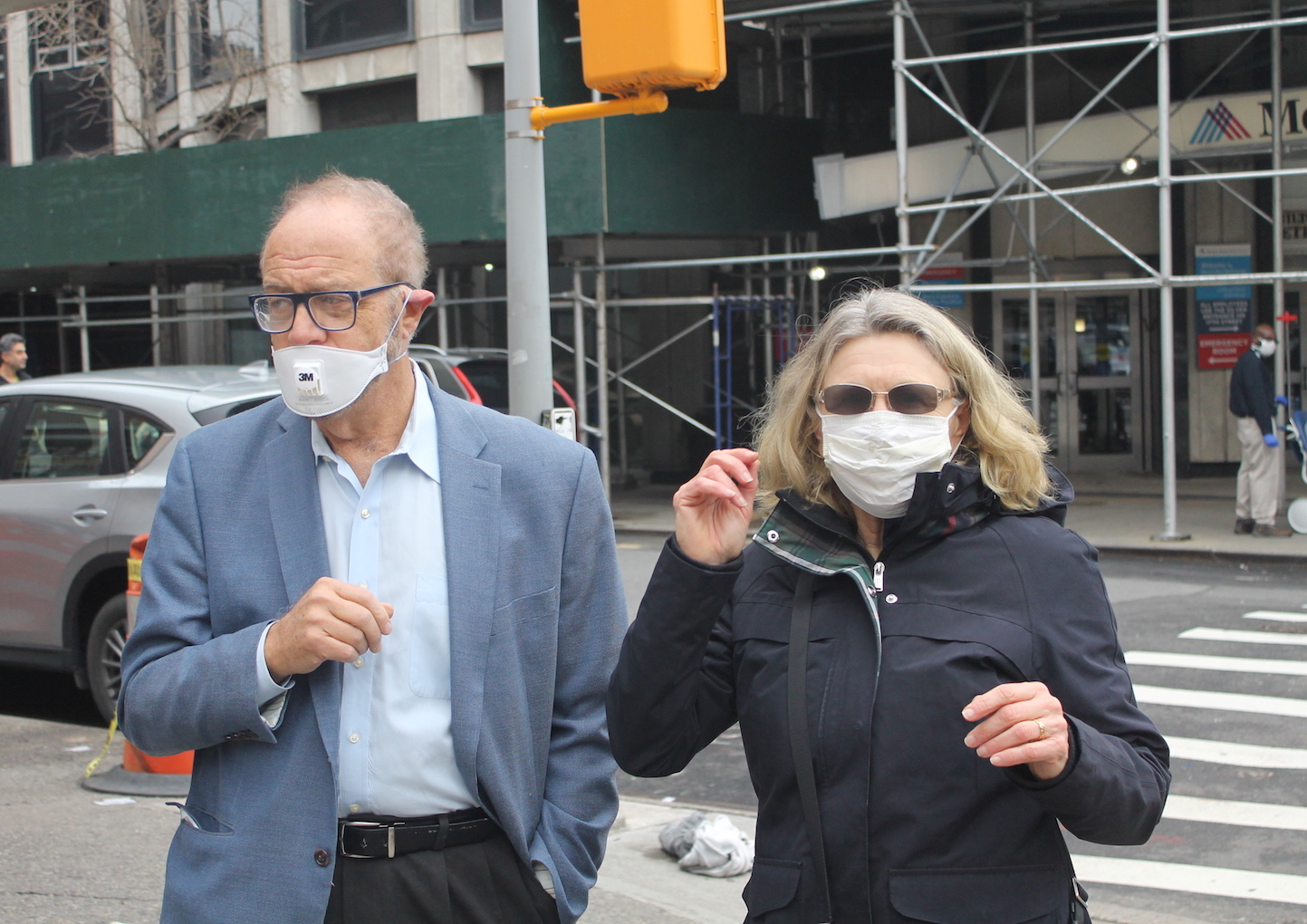 Village activists Arthur Schwartz and Penny Mintz, outside Beth Israel on Thursday, said the hospital has hundreds of vacant beds that could be used to help treat a potential surge of coronavirus patients. (Photo by The Village Sun)

BY LINCOLN ANDERSON | Updated Sun., March 22, 10:15 p.m.: New York City is scrambling for hospital capacity amid the coronavirus pandemic. Governor Cuomo has called in a 1,000-bed Navy hospital ship, and the feds are reportedly going to send one, too. There is talk of turning the Javits Center and Madison Square Garden into emergency intensive-care units.

But leaders of the effort to save Mount Sinai Beth Israel Hospital from being downsized say an obvious and much easier step right now would simply be to take advantage of hundreds of beds at the historic Gramercy hospital that are currently being mothballed.

Village District Leader Arthur Schwartz and Penny Mintz, the leader of the Community Coalition to Save Beth Israel, held a hastily called press conference outside the hospital, at 16th St. and First Ave., early Thursday afternoon.

As Schwartz arrived wearing a face mask, he handed one to Mintz. The only media covering the press conference were The Village Sun and a Fox News cameraman.

Schwartz — an attorney known for his pro bono community lawsuits — has been suing Mount Sinai Health System since 2017 to stop its plan to shut down Beth Israel and build a far smaller hospital a few blocks away with only 70 beds. His lawsuit is still active, and he claims it has slowed down Mount Sinai’s scheme, as the health giant tries to dodge doing a full-scale environmental impact study, which Schwartz argues is required for the project.

In a separate interview last week, Schwartz noted that back in 2017, Mount Sinai was saying the new mini-hospital would be open by 2021, but recently in a letter to him said they now project opening it in 2023.

“Beth Israel has 825 beds available for medical use,” Schwartz said at the press conference. “Right now there are 225 people in those beds. The rest are being warehoused.”

Schwartz noted that the governor and others are talking about turning the Javits Center into a “medical surge facility” for coronavirus patients, but that the Beth Israel beds are already ready and waiting. City Council Speaker Corey Johnson is also calling for Madison Square Garden — empty now due to the pandemic — to be used as a potential surge site.

“They are not offering these beds but here are 600 beds that are available,” Schwartz said of Beth Israel. “Right now, Howard Zucker, the New York State Health commissioner, has in front of him on his desk an application to build a new hospital with 70 beds — 70 beds,” he repeated, incredulously.

Schwartz said that, according to court documents, in terms of its general in-patient beds, Beth Israel now is using only 225.

Schwartz declared that the application must be rejected.

“If there was ever a reason for the commissioner to say ‘No’…the pandemic that we’re in the middle of, that’s going to get worse… . We’re standing here today to say, ‘Commissioner Zucker, you’ve got to be kidding,'” he said.

“Governor Cuomo, you’ve go to say ‘No’ to Mount Sinai,” he added.

“This community itself lost 725 beds when St. Vincent’s Hospital closed in 2010 and we can’t afford to lose any more.

“We don’t have to create new hospitals like they did in Wuhan,” Schwartz said, referring to where the virus originated. “These beds are there. All they need to do is staff up.”

He noted that, as part of his lawsuit, he has walked through and checked out the currently unused areas of the hospital, and that the beds are in place and ready to be used. Meanwhile, if Javits was outfitted as a temporary medical facility, it would still have to be sanitized, he noted.

Over all, he said, the city’s health system “should be ready for a crisis,” and the current coronavirus pandemic shows the “folly” of reducing hospital bed capacity.

Mintz pointed out that the Downtown area also was hit in 2008 by the closing of Cabrini Medical Center, which had 500 beds, and has lost 2,000 hospital beds over all in recent years, while the city has lost 20,000 beds.

For its part, Mount Sinai, justifying the Beth Israel downsizing, has said that healthcare advances have increased the amount and success of ambulatory surgery, and that its focus is on doing more healthcare throughout the community to keep people from going into the hospital in the first place. That may be an argument for slashing hospital beds during normal times — but, clearly, this is not a normal time.

As the coronavirus outbreak was starting to worsen last week, Schwartz, in an interview with The Village Sun at that time, had mentioned the underused hospital-bed capacity at Beth Israel in light of the most recent ruling on his lawsuit. The judge on the case, State Supreme Court Justice Shlomo Hagler, ruled that Schwartz has “standing” to sue because Schwartz lives in part of the hospital’s coverage area, the West Village, and has a heart condition that he has sought treatment for at Beth Israel.

Specifically, after suffering a heart attack in July 2016, the attorney had an angioplasty there to put in a stent, at which time he ended his election run against Assemblymember Deborah Glick. He said he was told then by Mount Sinai’s doctors that, had he needed more extensive heart surgery, he would have been transported Uptown. In short, Hagler said, Mount Sinai shutting down Beth Israel’s heart-surgery unit is fair game for Schwartz’s lawsuit.

As part of the Beth Israel rebuilding plan, Mount Sinai has been closing various medical units — others include pediatric surgery and maternity — at the Gramercy hospital and saying those services will now be offered at its other Uptown hospitals as part of its rebuilding plans.

The Village Sun asked a Mount Sinai spokesperson on Mon., March 16, if Beth Israel’s empty beds would be made available for coronavirus patients, but there was no response. (Subsequent to this article’s publication, Mount Sinai did respond, saying the answer was yes.)

Meanwhile, K Webster, a leading activist in the fight to save the former Rivington House AIDS facility for community use, recently reported that Mount Sinai C.E.O. Dr. Jeremy Boal told her the health system would be willing to make the Lower East Side facility — which is currently vacant — available for coronavirus treatment.

Webster sent out an e-mail Wednesday morning, including Boal’s reply to her:

“The Governor asked for potential sites for hospital overflow,” Webster wrote in her e-mail. “We asked Mount Sinai if they would offer Rivington House. Mount Sinai agreed and answered — superbly. We await elected representatives to move it forward. Now, while we have a (very) little time.”

In his response to her, Boal wrote, “Hi Kay, It is so good to hear from you and I hope you are well and good. We absolutely agree with you and we are making sure that the city and state know about this facility [Rivington House] and do with it whatever is best for us to all get through this. We are of one unified mind on all of this. Likewise, we are here for you and your friends and neighbors and communities and want to help in any and every way possible.

Schwartz said when he received Webster’s e-mail with Boal’s pledge to make Rivington House available, it spurred him to hold the press conference in front of Beth Israel Hospital.

“When I read that last night, I said, ‘I gotta go down there,’” Schwartz said.

The press conference was brief. Schwartz admitted they kept it small — just him and Mintz — to reduce the risk of exposure or community spread of coronavirus. Both of them are seniors, plus Schwartz has an underlying health condition.

Afterward, before heading back to his law office, he did a gesture now all too familiar to New Yorkers. He plucked a bottle of sanitizer out of his jacket pocket and thoroughly rubbed the disinfectant all over his hands.