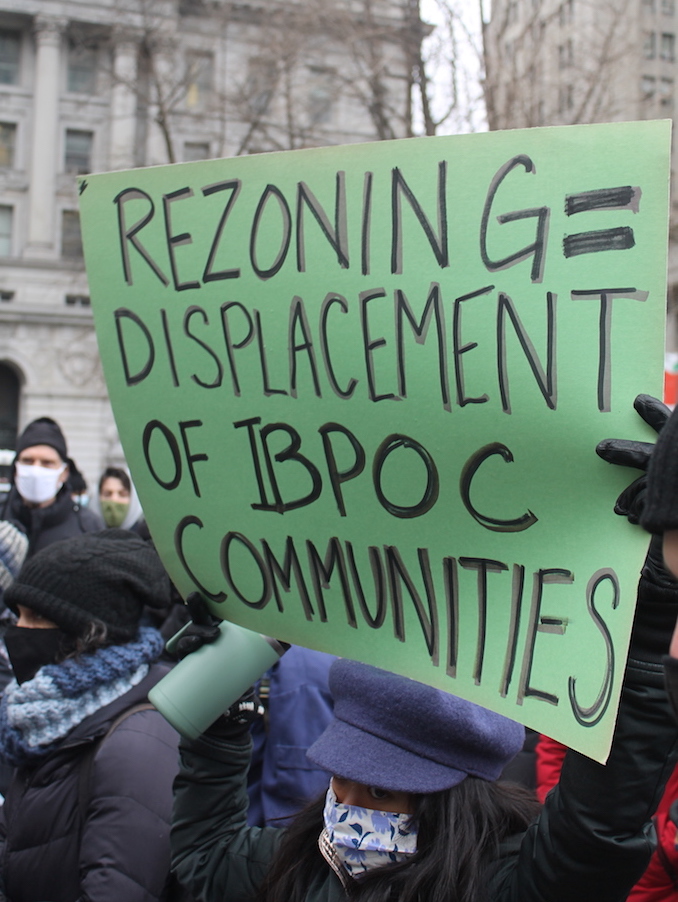 Community groups from around the city blasted Mayor de Blasio's rezoning schemes as racist against indigenous and black people and people of color. (Photo by The Village Sun)

‘Stop racist rezonings,’ cry community groups from across the city

BY LINCOLN ANDERSON | Updated Thurs., Dec. 17, 6:30 p.m.: Soho and Noho may be only the latest battle, but New Yorkers have been fighting against Mayor de Blasio’s rezonings for years and across many different neighborhoods.

On Wednesday, community groups from around the city rallied right outside City Hall to declare, “Enough is enough!”

In the bitter cold, speaker after speaker charged that the rezonings — which inevitably always include an upzoning — are “racist” because they displace existing residents, who are almost always black, brown or Asian people. In effect, the rezoning plans, by flooding neighborhoods with market-rate housing, are gentrification on steroids, the speakers said.

Now, however, with de Blasio a lame duck and about to enter his last year in office, City Hall is making a final push to ram through as many of his rezonings as possible.

But in a “Community Declaration on the Future of New York,” the activists instead proclaim that it’s high time to “stop all rezonings [and] reinvent the rigged land-use process to allow for legitimate community-led planning instead of imposing ‘done deal’ developments.”

Their statement urges politicians, candidates and all New Yorkers to “reject the housing policy that is based on enormous giveaways to luxury real estate developers in exchange for a small percentage of dubiously named ‘affordable’ housing. Stop the use of ‘affordable’ as a safe word,” the statement says, “to justify towerization or as a substitute for real, multigenerational affordability for low-income people.”

Furthermore, their manifesto says, “No land-use review process should be allowed to use ‘virtual’ meetings — such as Zoom — as a substitute for public hearings.”

Speaking at the rally, Jack Riccobono, of Voice of Gowanus, railed against the mayor’s rezoning plan for his Brooklyn turf.

“They want to blanket our neighborhood with 22-to-30-story luxury towers,” he said, noting that this rezoning would be twice as massive as the one for Hudson Yards.

But a rezoning in the former industrial area makes even less sense because of environmental reasons, Riccobono added.

“It’s not a good idea to bring 22,000 people into an E.P.A. superfund site, one of the most toxic sites in the state,” he warned, adding that Gowanus was also badly flooded during Hurricane Sandy eight years ago.

“This process is totally broken,” he said.

Dannelly Rodriguez, of the Justice for All Coalition and Democratic Socialists of America, decried the Flushing rezoning plan, in particular, and all rezonings, in general. He condemned what he called “rubber-stamping ULURP policies.”

“The rezoning policies in New York State have been racist and classist,” he charged.

“They want to build more housing that we can’t afford, when we’re in the biggest eviction crisis in our city’s history,” he said, incredulously.

Rodriguez noted that the very spot the rally was being held on had been an “autonomous zone” this past summer when it was taken over by Occupy City Hall.

“They evicted us from here, too!” he said, indignantly.

Rodriguez slammed the city’s Mandatory Inclusionary Housing program, under which rezonings allow developers to construct larger market-rate buildings, as long as they include a percentage of affordable units. The city claims this is the only way affordable housing can be built nowadays since these projects incentivize developers with the carrot of profits.

“They love spewing this capitalist neoliberal…that they need access to capital,” Rodriguez scoffed of the M.I.H. scheme. “What they need to do is tax the damn rich!

Rodriguez then ticked off a list of city councilmembers he dubbed “so-called progressives” who, in fact, have supported the rezonings. Number one on his list was the East Village’s Carlina Rivera, followed by Diana Ayala, Farah Louis, Francisco Moya, Justin Brannan, Ben Kallos, Keith Powers, Mark Levine, Antonio Reynoso and Vanessa Gibson.

“You can’t say ‘Black Lives Matter’ but then vote for policies that are against that,” he chided. “It’s over for that.”

Sean Sweeney, the director of the Soho Alliance, accused the mayor of “using Soho to justify rezonings.” Basically, the de Blasio administration and Open New York, a thinly veiled developer-driven advocacy group, argue that Soho and Noho must have more affordable units and more racial diversity “to do their share.”

“Yes, Soho is 85 percent white,” Sweeney acknowledged, “but there’s a fund, so the affordable housing could be built in other neighborhoods.”

In other words, as Sweeney indicated, the affordable housing that would be linked to an M.I.H. plan for Soho and Noho would not actually have to get built specifically in those areas.

Also, the activist said, never before in New York City since the creation of the Landmarks Preservation Commission in 1965, has City Hall dared to upzone a designated historic district, such as Soho and Noho.

“They want to do away with 50 years of landmarking so Bill de Blasio can satisfy his campaign donors,” Sweeney protested.

Finally, he said, it’s time to pull the plug on the current use of Zoom meetings on such critical land-use issues as rezonings.

“This is a public meeting,” Sweeney declared of the activists gathered on the blustery plaza. “Do away with Zoom meetings — that’s bulls—!”

Sweeney recently led an effort within the Downtown Independent Democrats political club to withhold its endorsement of Carlina Rivera for reelection until she answered whether she supports upzonings in historic districts. (Rivera’s District 3 contains half of Noho.) Nevertheless, D.I.D. subsequently recently did endorse Rivera, who so far is running unopposed, even though she had not yet held a promised follow-up meeting with club members, at which it was hoped she would clarify her position.

Speaking out against another project in a Lower Manhattan historic district was Stacey Shub, of Save Our Seaport. Howard Hughes Corporation is seeking to build two megatowers — larger than would normally be allowed — on a parking lot there, right next to two schools.

Lina Melendez, of Northern Manhattan Not For Sale, said residents are still fighting the city’s Inwood upzoning plan. The struggle now is continuing in federal court.

A common complaint about the M.I.H. projects is that the affordable housing in them is not really very affordable. Melendez said that, when affordable housing rents are determined, instead of basing them on area median income, the more accurate community media income should be used.

Like other speakers she also slammed the ULURP review process, charging that the premise of public input is a charade.

“Once that ULURP is announced,” she said, “that deal is cut. … The money is slipped under the table.”

Other speakers condemned plans that would overshadow the Brooklyn Botanic Garden with new residential towers or develop a major site in Sunset Park as a Plan B after the defeat of the Industry City rezoning.

Chris Marte, a candidate for City Council in Lower Manhattan’s District 1, stood in the crowd listening to the speakers from the community groups. He shared some of his thoughts on the hot-button topic with The Village Sun.

“It’s crazy. I think they’re trying to get everything in before the end of the administration,” he said of the city’s push on rezonings.

“Why during a pandemic are we forcing all these rezonings?” he asked. “It’s because they have no certainty about the next City Council and the next mayor, so they’re trying to get everything through. It’s disappointing.”

For his part, Marte said he supports the Alternative Community Rezoning plan for Soho and Noho, which has no upzoning, plus more and deeper affordability than the city’s plan.

The City Council candidate also noted that yet another new rezoning — for Governors Island — is coming down the pike for District 1. The plan could include up to 30-story buildings.

“They’re using the excuse of having a science center,” he said, “but it could lead to building hotels there and commercial retail spaces.”

Roger Manning, a co-leader of Metro Area Governors Island Coalition, or MAGIC, said the new group formed only about a month ago.

“It’s a refuge for New Yorkers,” he said of the island. “It’s a park. It’s accessible to all New Yorkers. It’s public land — they’re trying to sell it off.”

Meanwhile, Zishun Ning, a member of Lower East Side Organized Neighbors (LESON), said the one time the community actually presented a real grassroots rezoning plan, by the Chinatown Working Group, the city snubbed it.

Ning then called out, one by one, the names of neighborhoods around the city facing zoning projects — from Soho and Noho to East Harlem, Jackson Heights and the South Bronx — with the crowd shouting after each one, “Not for sale!”

Lindsey Boylan, a Chelsea resident who is running for Manhattan borough president in the Democratic primary, also attended the rally. She posted a statement on Instagram about her views on the issue.

In addition to rezonings, another de Blasio mega-plan was on the mind of at least one person in the crowd. Standing with a protest sign in her bicycle’s front basket, Barbara Katz Rothman said she was with East River Park ACTION. The group is fighting the city’s East Side Coastal Resiliency plan, which would bury East River Park under 8 to 9 feet of infill dirt to turn it into a massive flood barrier.

Katz Rothman said her main concern was the impact the project would have on local asthma rates. Residents living in public housing near the park already have high rates of asthma and lead poisoning, she noted.

“A decade of tearing down and rebuilding that park,” she said, “lots of particulate matter will be in the air.”