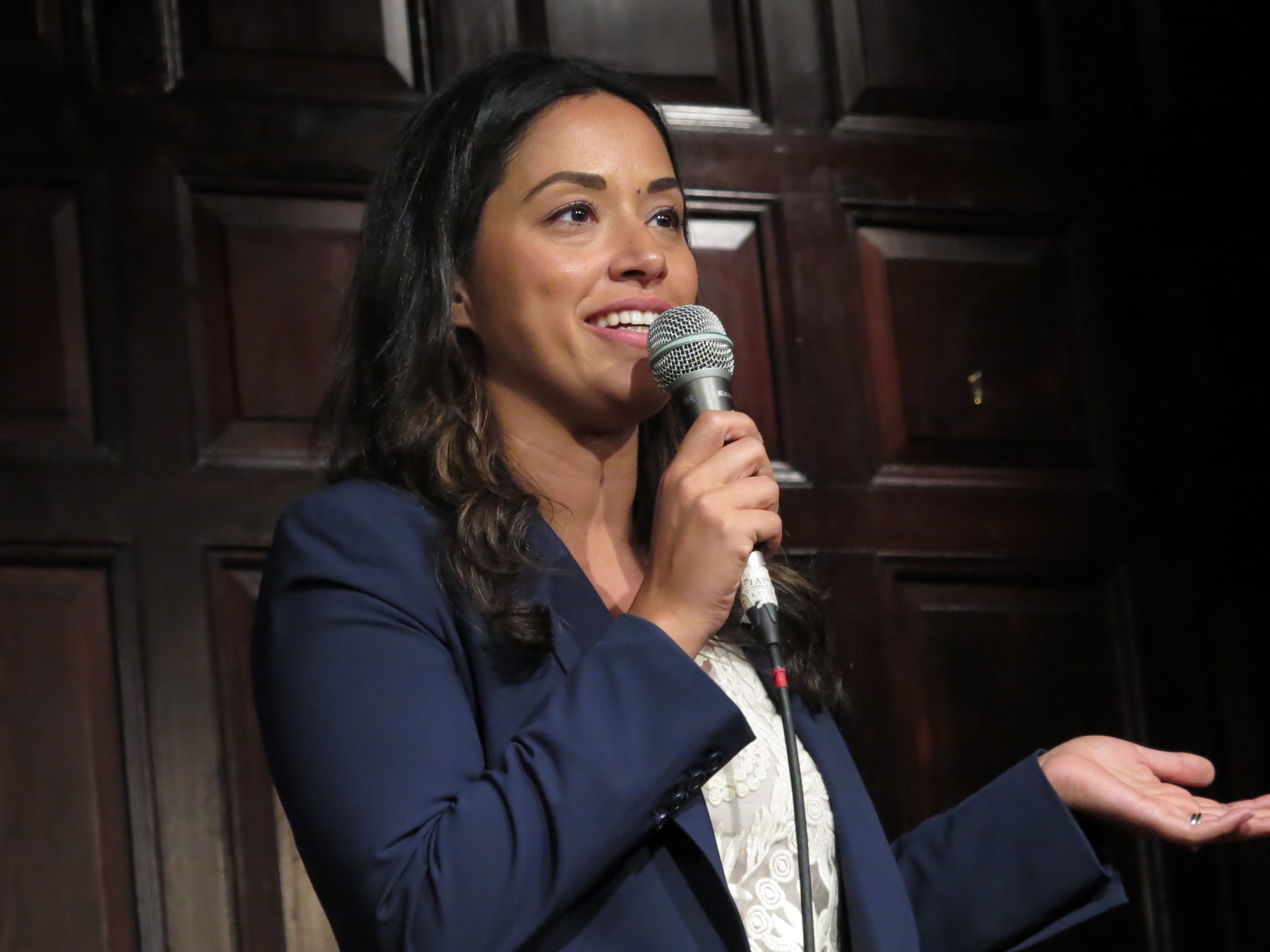 Where does she stand on upzonings for historic districts? Councilmember Carlina Rivera speaking at Theater for the New City's benefit gala in March. (Photo by Jonathan Slaff)

BY THE VILLAGE SUN | Hold your (historic district) horses!

The Downtown Independent Democrats political club had planned to make endorsements last Monday evening after hearing from candidates for the Second and Third City Council districts.

But, after a vigorous debate among its members, D.I.D. decided to delay endorsing in both races until it heard more from Councilmember Carlina Rivera on whether or not she supports upzonings in historic districts, which are landmarked areas.

A follow-up meeting has been set up between Rivera and club leaders, at which she will be asked to clarify her views on the subject.

In short, some D.I.D. members felt Rivera had been evasive during the candidates forum when District Leader Jeannine Kiely asked for her position on that issue, as well as on the city’s planned upzoning in Soho and Noho.

Soho and Noho are historic districts.

Rivera, who is running unopposed in the primary election, represents District 2, which includes the East Village.

“I think that one thing we can all agree on is that the 1970s zoning is outdated,” Rivera responded to Kiely, referring to Soho and Noho’s unique zoning. “I think if you are going to do this the right way, an upzoning [there] is appropriate. I think that the way the mayor approached this is the wrong way.”

Rivera said she had been “deferring” on the Soho/Noho rezoning to Councilmember Margaret Chin — whose district contains both neighborhoods — and Manhattan Borough President Gale Brewer. Chin and Brewer, along with the Department of City Planning, led the push to do an “envisioning” study for the rezoning.

While Rivera, in her answer, mentioned having supported the Essex Crossing development on the Lower East Side, which includes extensive affordable housing, she did not directly answer Kiely’s more general question on upzoning in historic districts.

For a significant number of D.I.D. members, that was a problem.

Richard Corman, the club’s president, confirmed that the endorsement votes had been delayed, but he did not want to comment on the record on the reasons why.

Sean Sweeney, the D.I.D. vice president, was a vocal leader of the club faction that successfully pushed to delay the vote. Afterward, he spoke to The Village Sun about it, though stressed that he was talking not as club representative but as the director of the Soho Alliance.

“Does she support — over all, citywide — upzoning in historic districts?”

It’s an important question, Sweeney said, because with more than 30 councilmembers due to be term-limited at the end of next year, Rivera is a leading candidate to be elected Council speaker.

“Maybe if she wants to sacrifice Soho, O.K., that’s her decision,” Sweeney offered. “But as the speaker, it’s important to find out whether she supports upzoning in historic districts — in her bailiwick, in other candidates’ districts. She could be speaker and she should [state her position].

Open New York is a group of primarily young white men who issued a report backing a Soho/Noho upzoning and who have regularly shown up at outreach meetings to testify in favor of the initiative.

“It’s a phony astroturf group funded by the heir to a real estate fortune,” Sweeney scoffed.

Meanwhile, he countered, there are many more members of preservation groups in New York City — like the Historic Districts Council and the Landmarks Conservancy — than there are Open New York members.

“I bet there are over half a million people living in historic districts,” he added.

Also, Sweeney continued, the idea that M.I.H. would create affordable housing in Soho and Noho — which Open New York and the de Blasio administration trumpet — is, in itself, a fallacy since the developers could just use a “credit” and build it in another neighborhood.

The longtime Soho activist evoked the name of a former City Council speaker, Christine Quinn, warning that he didn’t want to see Rivera — if she becomes speaker — follow in her footsteps on development matters.

“We had a speaker who similarly started out as a community and a housing advocate,” he recalled of Quinn. “Yet once she became speaker, she did a 180-degree turn and became very supportive of real estate developers. I would hate to see that happen with another speaker.”

Sweeney said if D.I.D. is to have any leverage with Rivera, it’s now.

“We realize she does not need our endorsement,” he said. “But we do not expect a candidate running for office to ignore a simple question. She’s gonna win [reelection], she doesn’t need us. But if we have any leverage, it is now. It’ll be zero leverage if she’s elected to a second term. I want historic districts throughout the city to know what her position is on upzoning historic districts.

“We like Carlina,” he continued. “But she just can’t avoid a legitimate question about a citywide concern — that affects not just historic districts in her district but throughout the city — at an endorsement meeting.

“That’s all we want. We felt if we let her off now, we would never ever have the chance [to grill her on the issue].”

Sweeney added there was, however, a telling “generational split” within D.I.D. on whether to endorse after the candidates forum; the younger members were more apt to let Rivera off the hook, despite her dodge, while the veteran community activists demanded to put her on the spot and make her answer.

“The community activist faction were the ones who wanted to postpone [the endorsement],” Sweeney said, “meet with Carlina and go over the report on the rezoning that just came out. It’s a 60-page report, fine print. We don’t even know if she’s read it yet.”

Rivera did not respond to a request for comment, asking her to clarify her position on upzonings in historic districts.