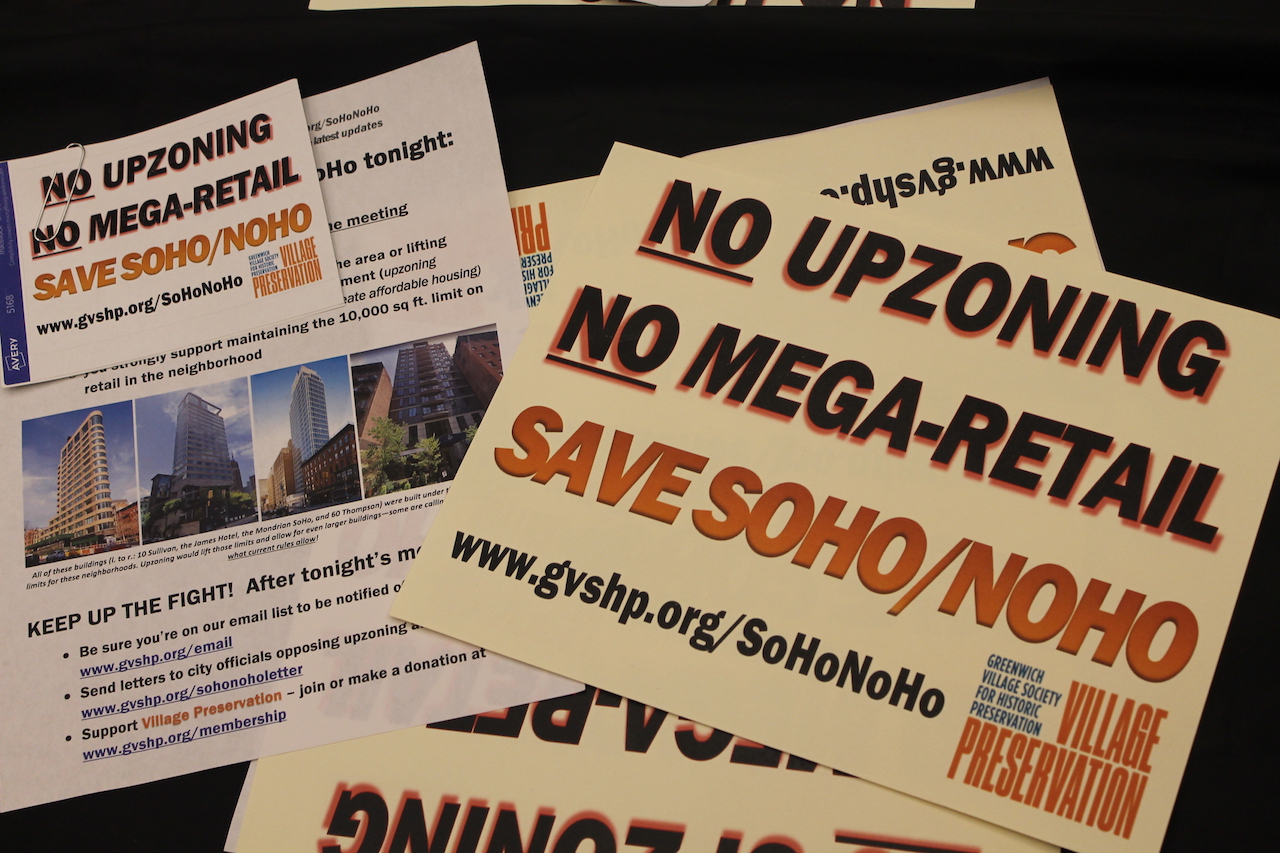 Posters by Village Preservation protesting the city's Soho/Noho rezoning plan at a January "envisioning" meeting for the hotly debated initiative. (Photo by The Village Sun)

BY THE VILLAGE SUN | Envision this, de Blasio.

The city’s current, much-maligned rezoning plan for Soho and Noho emerged — albeit abruptly and surprisingly — from a so-called “envisioning” process.

Now, a coalition of Downtown community and civic groups has done their own envisioning, drafting an alternative community rezoning that they would like to see for Soho and Noho.

Frustrated with City Hall’s rezoning idea for the two famed Downtown enclaves, and angered that the scheme is now moving full-speed ahead — though without community buy-in — local residents have taken matters into their own hands.

The opponents charge that the city’s plan includes “a massive upzoning” and “allowances for oversized chain stores” and bars and restaurants but “no guarantee that affordable housing will be built.”

But keeping new development reasonably sized should not limit the amount of affordable housing constructed, the groups add.

“Several cities throughout the country currently require inclusion of affordable units in new development without awarding an upzoning, and such laws have withstood legal challenges all the way to the Supreme Court,” the alternative plan states.

“A mandatory affordability requirement without an upzoning would enjoy broad support within the affected communities, as it is the upzoning, not the affordable housing, to which residents object.”

Subsidies would likely be needed, though, were building sizes to be capped, the position paper notes.

Second, the community alternative rezoning plan calls for even deeper affordability than what the de Blasio administration has put on the table, which is 20 percent to 30 percent of the proposed square footage that could be built. The community plan also calls for lower income levels for affordable units than the only 130 percent of area median income (A.M.I.) in the city’s plan.

The alternative plan states, “The current city proposal will allow up to 4 units of as-of-right luxury housing to be created for every 1 unit of affordable housing, potentially flooding these neighborhoods with new luxury housing while creating a comparatively modest number of affordable units. The city’s proposal would also allow households with incomes of up to approximately $160,000 and rents of nearly $3,500 per month to qualify for ‘affordable housing.'”

Third, the alternative plan calls for legalizing current residential uses  — some of which may not conform to current zoning — while ensuring that existing legal residents (i.e., artists) are not “de-prioritized.”

Fourth, the community proposal says that the creative arts character of Soho and Noho must be “retained, reinforced and perpetuated” in new development, residential conversions and street-level spaces.

“Loft Law and [Joint Living-Work Quarters for Artists] protections which enable artists to work in their homes should not be diminished in any way, so artist residents can continue to work and produce art in their homes without harassment or pressure,” the plan stresses.

In addition, even if nonartists will be allowed to live legally in Soho and Noho under a rezoning, Loft Law/J.L.Q.W.A. protections should be made available “whenever applicable,” for both new affordable and market-rate units for artists and workers in creative fields, the community scheme states.

Finally, the alternative plan says that as-of-right retail use in Soho and Noho must be capped at 10,000 square feet, while restaurants and bars should be no larger than 5,000 square feet as of right.

“Neighborhood residents do not object to a reasonable loosening of ground-floor retail regulations to allow retail uses which are compatible in size and character for the neighborhood,” the community rezoning concept states. “But an allowance for destination retail in excess of 10,000 square feet of selling space will only result in the dramatic proliferation of large chain stores and eating and drinking establishments that have already been shown to create conflicts in these mixed-use neighborhoods, and will likely have an even larger negative impact upon quality of life if those uses are expanded as of right.

The “closing statement” for the alternative plan stresses that the city’s process to approve its rezoning is being rushed. Indeed, the mayor only recently revived the plan, putting on a full-court press to get the rezoning done before he is term-limited out of office at the end of next year. In short, the statement says, in its furious dash toward approval, the city risks killing the proverbial goose that lays the golden eggs:

“At this extraordinary period of uncertainty in New York City, due to the current COVID-19 Health Emergency, the Department of City Planning has been unable to adequately conduct the necessary studies and analysis that will inform proposals for the future of these two unique neighborhoods,” the closing statement says. “What DCP presents, in its rushed Draft Scope of Work, is a REVISION for Soho and Noho, reprioritizing some key principles while ignoring essential problems brought forward during the Envision Soho/Noho process. Instead of building upon those ideas, DCP has drafted a plan that undermines the core concepts that built these two historic neighborhoods: Creativity, Preservation and Adaptive Re-Use.

“DCP runs the risk of undermining the unique qualities that have made Soho and Noho the model for planners around the world, and that serve as an economic engine for the City of New York.”

The opponents also stress that any rezoning — and especially one with changes as dramatic as what the city is proposing — should not occur until in-person public meetings and hearings can be held to review it.

To see the full version of the community alternative plan, click here.

In related news, the Land Use Committee of Community Board 2 will hold a public hearing on the draft scope of work for the city’s Soho/Noho rezoning plan on Tues., Dec. 8, from 6:30 p.m. to 9:30 p.m. Members of the public will be able to testify during the hearing and written comments also will be accepted.