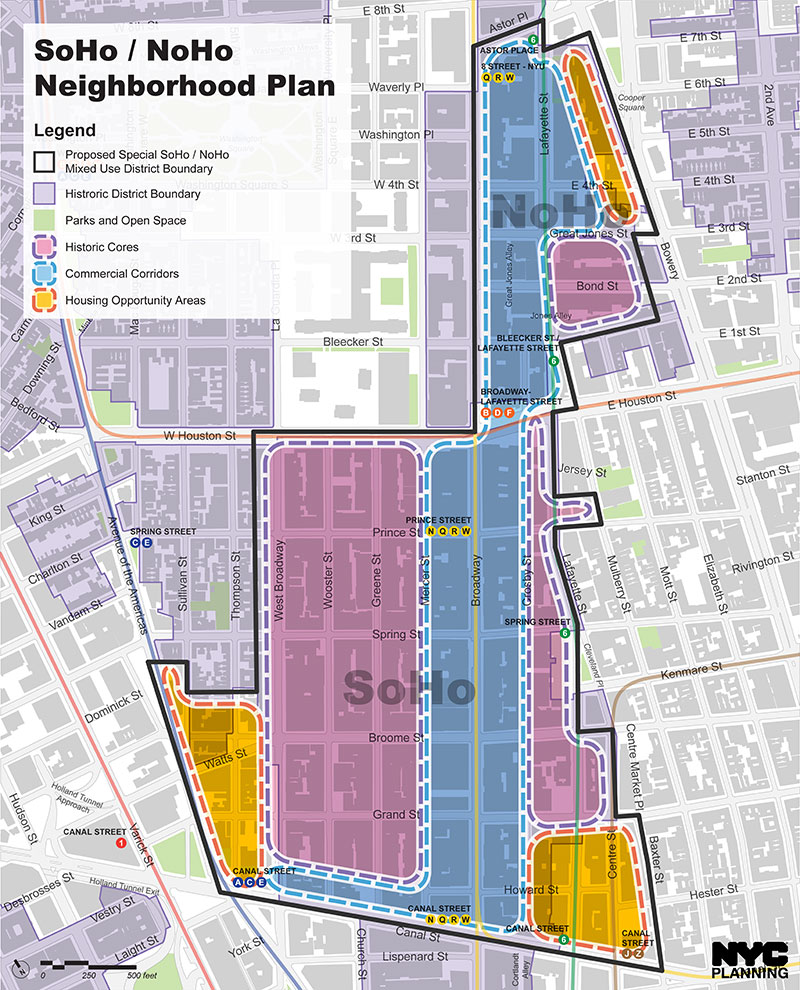 A map of the Soho/Noho rezoning study area with yellow areas representing what the city sees as so-called "housing opportunity areas" for new development.

BY THE VILLAGE SUN | The Soho/Noho rezoning push is suddenly back on, to the chagrin of many local residents of the neighboring Downtown enclaves.

On Wednesday, Mayor de Blasio announced the start of the public land-review process, known as ULURP, for the city’s ambitious rezoning proposal for the famed districts.

If approved, the initiative would update the areas’ half-century-old zoning codes.

“New York City has changed a lot in the last 50 years, and Soho and Noho have changed with it,” the mayor said. “Thoughtful, progressive zoning changes will pave the way for the next 50 years of growth — while making two iconic neighborhoods more accessible than ever, and helping us rebuild a fairer and better city.”

“The Soho/Noho rezoning is a critical step to promote fair housing and ensure that these two neighborhoods and New York City as a whole recover fairly and robustly,” said Vicki Been, the deputy mayor for Housing and Economic Development. “The pandemic and the movement for racial justice make clear that all neighborhoods must pull their weight to provide safe, affordable housing options. Updating the zoning in one of the city’s most iconic retail districts also will give arts and cultural organizations, retail and other businesses more flexible options to recover, adapt and succeed.”

“As our city continues its path to rebuild and recover, the movement to secure housing justice and build inclusive neighborhoods has never been more urgent,” Councilmember Margaret Chin said. “For years, I have maintained that the fight to create more deeply affordable housing and expand housing stability is a shared responsibility, and I look forward to working with residents, stakeholders and the administration to take our community dialogue to shape the future of Soho and Noho to the next level, and chart a path forward that brings more opportunities for desperately needed affordable housing while preserving and enhancing the artistic, cultural and historical components that make these neighborhoods so special.”

Yet, back in late January, before the pandemic hit, de Blasio appeared to be backing off of the idea of rezoning Soho and Noho. Speaking on Brian Lehrer’s WNYC radio show back then, the mayor said of the proposal, “I think it’s a question of whether it’s viable to get it through the ULURP process in the coming months and years. But is it generally the right idea? Of course.

“There’s a good report out that I think points us in a good direction,” the mayor said of the Envision Soho/Noho rezoning study back then. “But what I want to be very real about, in the next two years, is where are the things that we are absolutely certain there will be the support for in the ULURP process to get it done. Because I got two years to work urgently on these issues, Brian, and I’m going to put my energy in the places where I’m convinced we can get something done. So as we look at that issue, that’s the question. Can we put together the support to get something like that done? I’m not sure of that at this point.”

But, apparently, now the mayor is sure that the rezoning of Soho and Noho can be rushed through in the 15 months remaining before he is term-limited out of office at the end of next year.

Similarly, Councilmember Chin will be term-limited out of office at the end of 2021. However, perhaps adding to the city’s urgency, a leading candidate to succeed her, Christopher Marte, does not support upzoning Soho and Noho.

“In spite of assurance for months to the contrary,” Berman said, “it looks like city officials are moving full-steam ahead with a plan to upzone Soho and Noho, to allow vastly increased amounts of super-luxury housing in the neighborhood in out-of-scale high-rise towers. Meanwhile, they continue to refuse to consider measures that would produce more affordable housing while preserving neighborhood scale and character.

“In typical de Blasio administration fashion,” Berman added, “this decision-making process shut the community out when consultation was promised, and the result really serves to enrich his developer/donors and not the average New Yorkers or New Yorkers in need that he claims to serve and represent. This upzoning approach of super-luxury towers with a small set-aside for affordable units is bad for New York City, bad for our neighborhoods and bad for affordability.”

Current zoning in the Soho and Noho allows buildings of more than 300 feet in height to be built, such as 9 Crosby St., the preservationist noted. Supporters of upzoning the neighborhood want to allow development two and half times as large as what current zoning allows, he said.

Similarly, during Monday night’s City Council District 1 candidates forum, Soho activist Lora Tenenbaum, in posing a question to a candidate, said she supports affordable housing but is concerned the neighborhood would be flooded with new “ultra-rich” residents if the upzoning were O.K.’d.

The proposed changes would cover an area generally bounded by Canal St. to the south, Houston St. and Astor Place to the north, Lafayette St. and the Bowery to the east, and Sixth Ave. and West Broadway to the west. The area is currently mapped with unique zoning districts that date to the early 1970s, when vacant manufacturing buildings were being repurposed by artists drawn to the neighborhoods’ affordable lofts.

The plan would allow new residential housing to be built in the currently manufacturing-zoned area. It would require affordable housing in all new developments, allowing for the creation of as many as 3,200 new homes, with roughly 800 permanently affordable homes — or 25 percent of the total of new units — via Mandatory Inclusionary Housing.

Rules designed in the ’70s to recognize artist live-work space would be “reimagined to reflect modern live-work modes,” according to the press release.

A map of the plan shows three spots marked “housing opportunity areas,” including the west side of Cooper Square in Noho, plus Soho’s southwestern and southeastern corners, which presumably are being earmarked for new high-rise towers.

The rezoning would be in line with the priorities of Where We Live NYC, the de Blasio administration’s fair housing planning process. Per the press release, “Where We Live NYC calls for changes to ensure every neighborhood can contribute to the city’s affordable housing development goals — especially amenity-rich, high-income, disproportionately white areas like Soho and Noho.”

The area’s existing zoning prioritizes manufacturing, which has mostly left the neighborhoods, and subjects landlords and merchants to lengthy and costly approval processes for their storefronts, contributing to retail vacancies. According to the city, the plan would provide more zoning flexibility for businesses, artists and cultural organizations.

The notice of the scoping hearing, the first step to prepare for the ULURP, which can typically last seven months, will be released this Fri., Oct. 9, and the remote public scoping meeting will be held Nov. 10. The formal certification of the public review process is anticipated in 2021.

The Soho/Noho rezoning notably has been championed by a group of young development wonks calling themselves Open New York. Hissing at and mocking them at public meetings, Soho and Noho locals suspect them of being a front for developers, but the Open New York members have steadfastly denied it.

In response to the announcement that the city plans to forge ahead on the rezoning, Open New York board member Will Thomas released a statement hailing the idea.

“We’re thrilled that the administration is moving forward with a rezoning of Soho and Noho for more housing, which Open New York has pushed for since the beginning of the Envision Soho/Noho process,” he said. “We first released our detailed plan for an equitable rezoning in Soho/Noho last June, and we have been organizing and coordinating with other groups to make this happen since then.

“For too long, housing and land-use politics in New York have allowed exclusionary neighborhoods to reject new housing, and this rezoning is an important first step to reversing that status quo,” Thomas said. “Seeing the rezoning through is a matter of racial and economic justice, and the mayor must complete this process if he is to have any chance of repairing his legacy and living up to his ideals.

“We’re sure exclusionary interests in Soho and Noho are ready to mobilize to oppose this rezoning during the ULURP process, and we’ll be there to meet them, and continue the fight for racial and economic integration in New York City.”