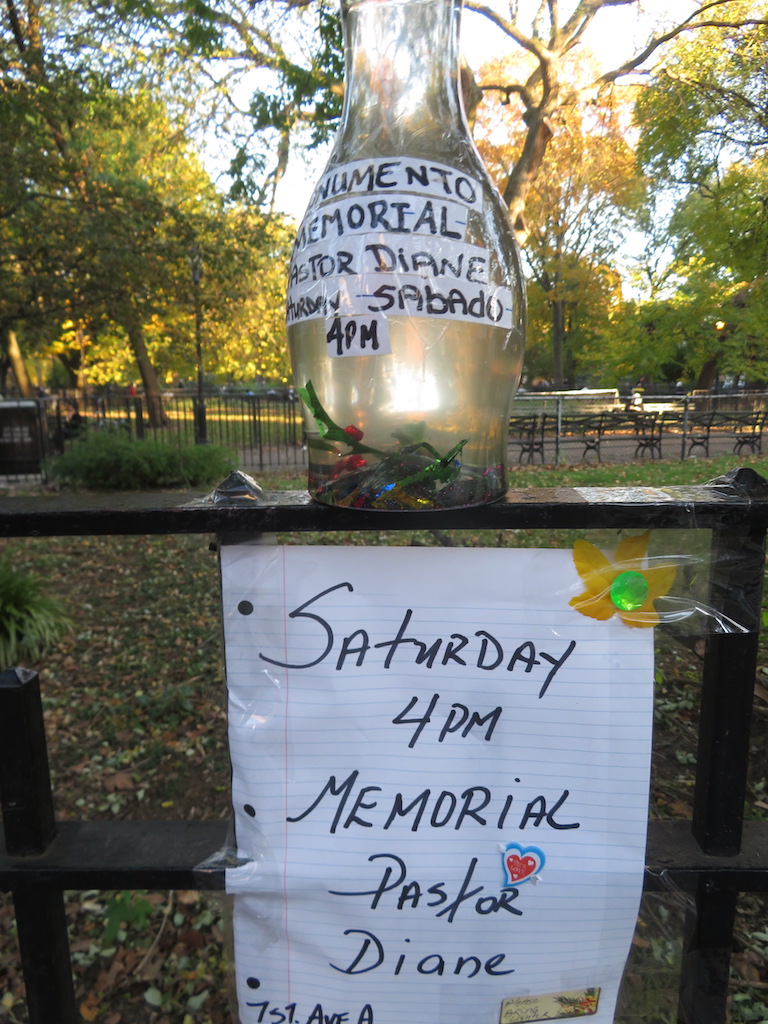 BY CHARLEY CRESPO | “Someone vandalized the tribute I made to Pastor Diane,” charged Catherine Jones Galante. “I reported it to the police on Thursday and asked them to use their camera surveillance to find the person or persons who did it. I want them arrested.”

Dozens of poor and homeless residents of the East Village and Lower East Side were shocked when they came to Tompkins Square Park on Saturday afternoon. Pastor Diane Dunne‘s volunteer team, gathered in grief, informed the community that Dunne, who launched the weekly food distribution there in 1987, had died suddenly at home in Long Island on Friday night/Saturday morning.

According to the pastor’s brother, Ken Dunne, the cause of death remains unknown, but the family believes it was a heart attack.

Galante describes herself as a servant of Reverend Dunne and said she assisted her with the food distributions. Galante spent a day creating elaborate signage as a tribute. She decorated the signage with numerous Christian images, lists of Dunne’s charitable works and messages of love and sorrow. The graphics included gold stars, paper flowers, costume jewelry and glitter. The signage also invited the public to a memorial service there this Saturday at 4 p.m.

On Tuesday evening, Galante began hanging the signage on the fence along Avenue A near where Dunne conducted her ministry to the poor and homeless for the past 33 years. Galante said she returned several times on Wednesday to add fruit, candles and other items to the sidewalk tribute. But the tribute was gone when she returned there on Thursday morning.

“It took me an hour and a half just to hang the signs,” she said. “I used a whole roll of wire. It took someone a lot of work to take it off the fence.”

Scraps of ribbon, tape and other remnants indicate that it was not the Department of Parks and Recreation that removed the tribute. Their job would have been more thorough.

The signage said that the Saturday memorial was sponsored by Graffiti Church, Street Life Ministries and “all community family.” On Wednesday evening, however, Pastor Taylor Field of Graffiti Church, at 205 E. Seventh St., said he had heard about the proposed memorial from someone in the neighborhood but that the event was not directly affiliated with his church. Taylor had not seen the posted signage, but remarked that he felt it spoke of “the tremendous work Pastor Diane had done in the community.”

Neither Dunne’s immediate family nor her ministry in Farmingdale, Long Island, knew about the signage or its announcement of a memorial service until informed by this reporter on Wednesday evening, according to Ken Dunne.

Dunne’s Hope for the Future Ministries Web site announced her death on Sunday and posted on Monday that a memorial service for the pastor would be planned for Tompkins Square Park. But since then, the Web site has not been updated with further information. Ken Dunne informed this reporter on Wednesday evening, “We will be planning something for next week.”

Meanwhile, Galante continues building smaller tributes at the same location. She announced the memorial service again by writing it in chalk on the ground.