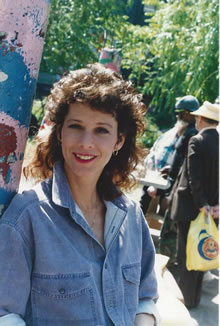 Pastor Diane Dunne of Hope for the Future Ministries.

BY CHARLEY CRESPO | Updated Tues., Nov. 3, 1:45 p.m.: Dozens of homeless and poor New Yorkers were stunned on Saturday afternoon when they came to Tompkins Square Park for their usual hot dinner and pantry bags. The regular volunteers of Reverend Diane Dunne, who had run the weekly food and clothing distribution for the past 33 years, told the needy arrivals that the pastor had died in her sleep that morning in her home in Farmingdale, Long Island.

“I feel like a dagger is cutting through my heart,” said Justo, who has volunteered with the weekly food distribution for more than a year. “She helped a lot of people.”

Behind him, Maria, who served the hot food for decades for the pastor, stood alone in silence, trying to come to grips with the shocking news.

Pastor Dunne died suddenly at home at age 66 this past Friday night/Saturday morning.

“My mother and I are still in shock over this. Our mother is 90 years old,” said Ken, brother of the pastor.

The siblings also lost their father a month ago.

“We do not know yet  the cause of my sister’s death,” he said. “We think her heart just stopped as she was sleeping.”

Over the decades, Dunne’s Hope for the Future Ministries provided hundreds of needy people with food and clothing, but also blankets and toiletries for those living in the park and on the streets. When her guests shared with her that they had secured an apartment, she gave them housewares. It was not only needy people she served, however. In recent months, she adopted an abused dog and could be seen walking the dog in the park while her guests received their weekly food distribution.

Dunne, according to several Lower East Side residents, led a precarious life while hanging in Tompkins Square Park in her 20s. She found Jesus, became an evangelical, attended ministry training and was ordained a minister in 1987.

That same year, she launched a food and clothing distribution ministry in Tompkins Square Park. She built warehouses by her Long Island home, received contributions, and gave herself a salary ($30,000 about a year ago). As she built the ministry, long lines formed, awaiting the arrival of the two vans that brought them basic necessities. Her team of volunteers served a hot dinner, and gave out fresh produce and nonperishable foods to more than 100 people twice a week (only recently down to once a week) for all those years.

Dunne rejected government contributions because then she would not be able to preach. She held a brief “Church Without Walls” religious service in the park before the food service on Wednesdays, and gave a mini-sermon before the Saturday distribution. This spring, however, the lockdown and curfews put her ministry on hiatus. When she returned in the summer, she resumed only on Saturdays.

She was tough on people, even her volunteer helpers, but this was how she got the operation done. She poured herself out for street people, but suffered greatly for it. Over the years, many people mistreated her; she sustained verbal and even physical abuse on many occasions. She suffered physical ailments related to her ministry, including screws in her back, such that she could no longer lift the goods she carried in her vans.

The pastor attracted many detractors not only due to her work with the most marginalized but also because of her outspoken political views. Dunne was an avid Trump supporter. She warned her listeners about the “Last Days,” citing numerous conspiracy theories about the government, COVID and the Catholic Church.

At press time, funeral arrangements were pending. The plan is to show the funeral on Zoom since the number of people who may attend in person will be limited. Check the Hope for the Future Ministries Web site for information.

There will be no food line in Tompkins Square Park on Sat., Nov. 7, as the interment plans are yet to be decided.

There will be a memorial service in Tompkins Square Park but the date has not yet been set.

Clarification: The original version of this article said that Dunne came from a Jewish family, and, in fact, she often did say she was Jewish. According to a family member, Dunne may possibly have had a Jewish ancestor “on her Spanish side at one time.”