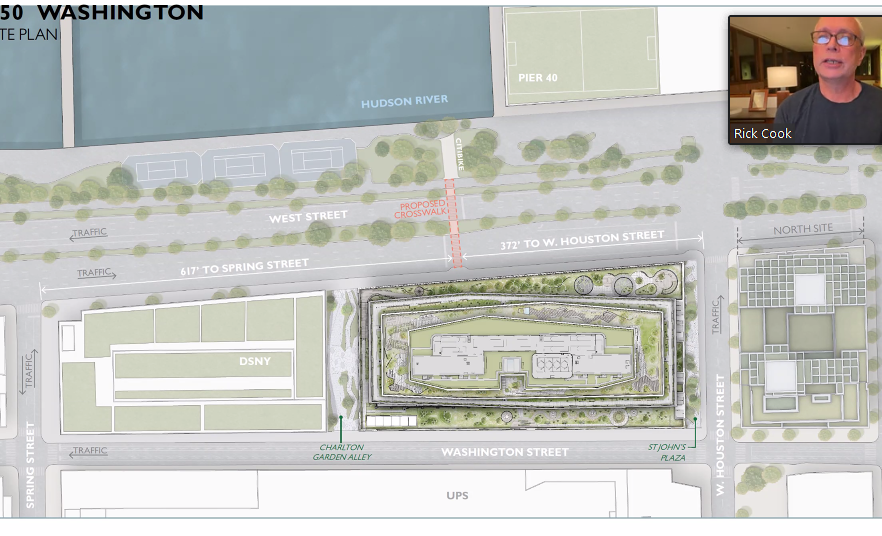 Under the Oxford Properties/Google plan, a new crosswalk — shown in red, above — would connect across the West Side Highway to Hudson River Park near Charlton Street.

Safer West Side Highway crossings planned, but too late for senior woman killed by truck

BY LINCOLN ANDERSON | The death of Mablen Jones, a 78-year-old Hudson Square resident, as she was crossing the West Side Highway at Canal Street Wednesday afternoon, tragically highlights the well-known dangers of this stretch of roadway.

Efforts are currently afoot on two fronts to make this area safer for pedestrians — in the form of a new at-grade highway crossing at Charlton Street, inspired by the incoming Google office building, plus a possible bridge spanning the highway at Spring Street that the Hudson Square Business Improvement District hopes eventually to build.

But neither of these crossing options were available to Jones on Wednesday when she took her fateful walk across the highway.

According to police, Jones, who lived in a nearby loft building at 99 Vandam Street, was crossing the highway from west to east in a spot without a crosswalk or pedestrian signals. A 70-year-old driver in a large Toyota pickup truck was stopped at a traffic light in the highway’s right Downtown lane just north of westbound Canal Street. He began to travel south after the light turned green and struck and ran over the senior woman. Jones was taken to Lenox Hill Hospital where she was declared dead.

So, out of four possible spots for crosswalks at Canal Street and the highway, there is currently only one — on the south side of eastbound Canal Street.

According to Streetsblog, the lack of a crosswalk where Jones was hit is intentional, “because city officials are trying to discourage pedestrians from crossing at that point because it would inhibit the flow of cars either turning left onto [eastbound] Canal or cars from [westbound] Canal turning right onto [northbound] West Street.”

No doubt, the intersections are currently set up that way to prioritize car traffic going to and from the Holland Tunnel. Meanwhile, pedestrians simply want to get to Hudson River Park and need more safe, convenient crossings to do so.

There is also currently no crosswalk across the highway at Spring Street, just north of Canal Street, either. In fact, the next crossing to the north is not until one-third of a mile away on the north side of Houston Street — a six-minute walk away.

“The [Hudson River Park] is a big draw for pedestrians, “Gridlock” Sam Schwartz, a former city Department of Transportation commissioner, told Streetsblog. “Anywhere that pedestrians are trying to cross should have a crosswalk.”

This reporter, in fact, has more than once done a risky crossing on foot in this deceptively dangerous area of the West Side Highway, having sometimes had to hop up onto the highway median for safety as traffic started to flow or cars suddenly came quickly turning onto or off of the highway.

It’s not clear that D.O.T. is immediately planning to change anything about the Canal Street intersections at the West Side Highway. However, as mentioned above, there are currently two plans to add major highway crossings in Hudson Square that would increase pedestrian safety.

The Hudson Square BID recently announced a long-term plan to build a pedestrian bridge to Hudson River Park at the east end of Spring Street. At the end of September, Ellen Baer, who this week stepped down as the BID’s executive director, discussed the concept with The Village Sun.

The BID estimates the bridge would cost about $40 million, with half of that amount funded by the BID and half by the city. However, Baer noted, “There is no timeline [yet] on the bridge.”

“The street from Canal Street to Houston Street is the longest sretch of Hudson River Park without an east-west crossing,” Baer noted, pointing to the need for more crossings in this area.

Baer said a bridge would be “better situated” at Spring Street than at points north or south of it for a few reasons. First of all, she noted, Spring Street runs straight across town all the way to the Bowery, making it a good conduit for people going to and from Hudson River Park. Also, she added, Community Board 2 favors this spot.

As for why the crossing should not be at-grade at Spring Street, she said the BID had been told that it would “severely interfere with the flow of automobile traffic. It’s why the BID is suggesting looking at a bridge,” she said.

She added that the BID would do a lot of community outreach on the bridge idea before launching into the project.

Meanwhile, in a plan likely to come to fruition much sooner, Oxford Properties, which is constructing the new Google office building at the former St. John’s Terminal site, is planning to install an at-grade highway crossing at Charlton Street. The new Google building will stretch from Houston Street to Charlton Street between the highway’s eastern side and Washington Street.

At the southern end of Google’s building a through space will be left open from the highway to Washington Street for what is currently being dubbed Charlton Garden Alley. Pedestrians will be able to walk through this space.

Oxford Properties opted not to put the crosswalk at Spring Street since there is “no room” for it there, plus it would “back up traffic at Canal Street,” according to Philip Habib, a traffic consultant who discussed the plan at last month’s C.B. 2 Traffic and Transportation Committee meeting. D.O.T. preferred the Charlton Street location, Habib added.

Dan Miller, a Traffic and Transportation Committee member, wanted to know why the crosswalk was not being planned to align with Charlton Garden Alley, but instead would be installed a bit north of there. Rick Cook of COOKFOX Architects, which designed the Google building, said if the traffic signal were farther south and the crosswalk aligned with the alley, it would “back up” Department of Sanitation trucks lining up to enter the D.O.S. garage south of the Google site. Miller, though, disputed that would happen, saying he constantly is riding on the Hudson River bikeway and has never seen any garbage trucks lining up on the highway at the spot.

“Currently, there is zero traffic going north of Canal Street,” Miller said. “Most cars are going into the Holland Tunnel. I ride my bike every day and I never see Sanitation trucks lined up, ever.”

For Miller and Shirley Secunda, the committee’s chairperson, increasing the number of safe pedestrian crossings along the C.B. 2 section of the highway has been a yearslong priority.

In addition, while Oxford said that the highway crossing time would be 40 seconds, C.B. 2 members said more time should be added. There will be a wide highway median that people can stop on midcrossing.

Ingrid Weigand, a longtime Soho resident, was skeptical about the new crosswalk’s location, which would be midblock between Houston and Spring Streets.

“I don’t understand how this is public access,” she scoffed. “I can’t think of a single reason why anyone who wasn’t lost would use it.”

But Cook said it’s a good spot for the crosswalk since, for one, people would get to look at a beautiful view of the park as they cross rather than, say, the river-view-blocking pier shed of Pier 40 to the north.

“Oxford is paying for this,” he noted. “More crossings to the park are better.

Google will buy the building but has not done so yet, which probaly explains why Oxford is leading the effort on the crosswalk. Google plans to close the deal early next year, paying $2.1 billion for the property.

As for the Charlton Garden Alley, Fox said it actually will have plantings on its northern and southern sides. Cook said the alley will be “completely committed” for public use and pedestrians and cyclists and that Google “won’t encourage vehicles to cut through there.” However, cars will be able to make dropoffs in the alley. The building’s entrances will be at its north and south ends.

In addition, as part of the planned new Charlton Street crosswalk, Oxford commissioned Mathews Nielsen Landscape Architects to redesign a small section of the Hudson River Park just north of the tennis courts where the crosswalk will connect with the park. This will involve shifting the Citi Bike rack a bit and also removing some greenery to create a small plaza area. Trust C.E.O. Doyle said the park-governing organization is on board with the changes.

The Google building also will have space in its basement to park hundreds of bikes. However, Angela Pinsky, Google’s head of government affairs and public policy, said that many Googlers will walk — “a good percentage of the population lives within walking distance,” she noted — or take public transit to work, while only about 4 percent will bike to the office. The buiding is expected to open in 2023 with 3,000 employees, possibly expanding to 5,000 by 2025. Those numbers boil down, respectively, to only 120 and 200 cyclists.

Speaking of bikes, during the C.B. 2 committee meeting, one local woman also asked, “Is the terrifying bike lane on West Houston Street between Washington and West Streets going to get fixed?” She was referring to the bike lane that is situated in the middle of this stretch of traffic-heavy Houston St., which is indeed completely terrifying to ride on, as are all such bike lanes that D.O.T., for some reason, sticks in the middle of car traffic, as opposed to by the curb.

There was no immediate answer. However, Carter Booth, the immediate past chairperson of C.B. 2, did agree, “That’s a crazy intersection at Houston Street.”