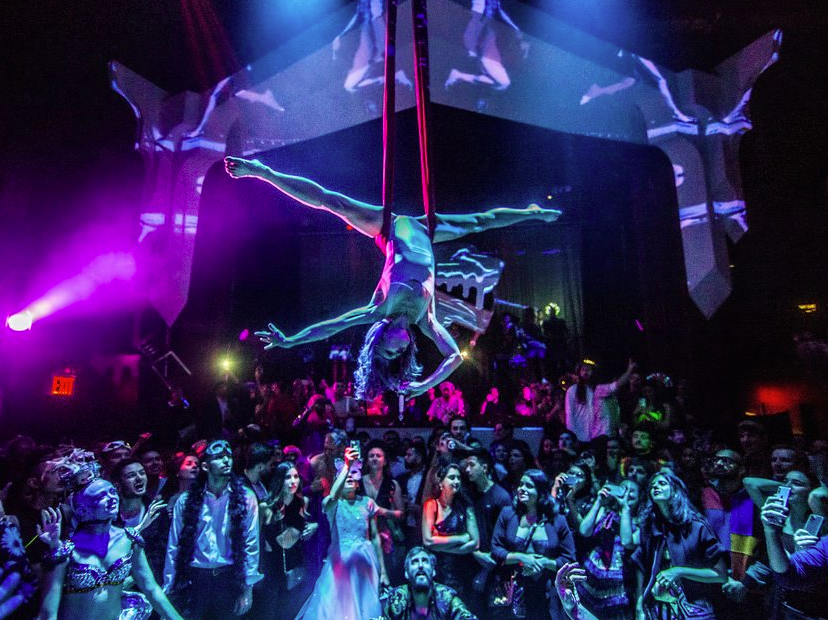 A scene from a Surrealist Ball at House of Yes this past December. (House of Yes)

S.L.A. says no to House of Yes; Suspends liquor license

BY THE VILLAGE SUN | The State Liquor Authority has grounded the high-flying House of Yes in Bushwick for COVID-19 health-safety violations.

A combination of a creative collective and nightclub, House of Yes, at 408 Jefferson St., is known for its aerial and circus performers, burlesque dancers and wild theme parties.

According to the authority, on Aug. 21, investigators with the state’s multiagency task force observed “an overcrowded nightclub-like atmosphere” directly in front of the premises, with music blasting, and at least 30 patrons downing alcohol at tables set up less than 6 feet apart.

In addition, the investigators said, no food was being served, with the manager admitting the kitchen was nonoperational — a violation of state law since 1964. Investigators also reportedly documented an employee without a face covering and “numerous fire and life-safety violations.”

Governor Cuomo announced the action against House of Yes on Aug. 29, also noting that five other establishments had their licenses suspended in this latest round, including two others in Brooklyn, one in Oswego and two on Long Island, in Southhampton and Roosevelt.

In the case of the Roosevelt suspension, it was a grocery store that was never permitted to serve on-premise alcohol, but was caught with 14 people drinking beer inside and six workers not wearing face coverings.

Blu Mar, in Southhampton, was hit with a slew of violations, including serving an underage agent, allowing patron dancing in violation of social distancing and having an “exotic dancer” perform on the bar top, although the business is not licensed for adult entertainment.

“New Yorkers’ hard work is paying off, with the state maintaining an infection rate of less than 1 percent for over three weeks straight — but we must remain vigilant and continue to follow the guidelines that got us here or risk backsliding,” Cuomo said. “Compliance in higher-risk industries like bars and restaurants has been key to achieving this progress, and as today’s suspensions show, the state will hold bad actors who put public health in danger accountable. The vast majority of bar owners continue to take this public health emergency seriously, but my message to the small number who openly flout the rules is simple: We will not tolerate you putting yourselves, your customers, your employees, your neighbors and our reopening at risk.”

S.L.A. Chairperson Vincent Bradley said, “We are seeing better compliance across the state as a direct result of the hard work of the task force and the actions of conscientious business owners that are putting public health and safety first. But we’re still in the middle of a global pandemic, and the task force will continue taking action against the small number of establishments who willfully violate the coronavirus-related regulations.”

The total number of bars and restaurants in New York State whose licenses have been summarily suspended for “egregious violations” of pandemic-related executive orders now stands at 168.

Between last Monday and Friday nights, the state’s multiagency task force — led by the State Police and State Liquor Authority — conducted 5,981 compliance checks, documenting violations at 35 establishments. Businesses found in violation of COVID-19 regulations face fines up to $10,000 per offense, while egregious violations can result in the immediate suspension of a bar or restaurant’s liquor license.