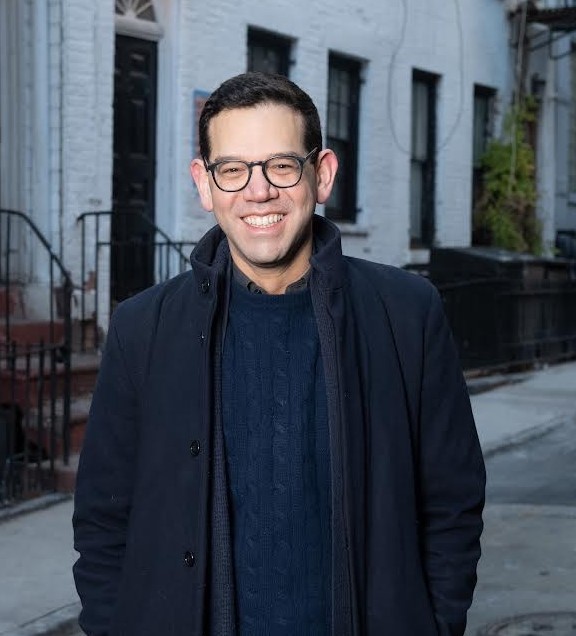 BY LINCOLN ANDERSON | Ryder Kessler, a young politico endorsed by Open New York, among others, is running against longtime incumbent Assemblymember Deborah Glick in the Democratic primary election. The election date is set — at least for now — for June 28. This is Kessler’s first race for elected office.

The candidate recently met with The Village Sun for an interview at an outdoor table at Café Kitsuné, at Hudson and Perry Sts.

Born at St. Vincent’s Hospital, Kessler, 36, grew up north of Union Square at 18th Street and Fifth Avenue above what used to be a Barnes & Noble bookstore.

He was raised in what he called an active, “politically progressive household.”

For education, he attended Friends Seminary, Hunter College High School, Harvard for undergraduate and then did four years of Ph.D. work at Columbia, thinking he would be a professor of 19th- and early 20th-century English and American fiction. Instead, though, he wound up lauching a company, DipJar, that allows digital tipping.

“I’m a frequent customer of coffeeshops, and this was before iPads at point of sale,” he explained. As people increasingly were going cashless for their purchases, baristas told him the tips in their tip jars were sinking by 50 cents an hour. The DipJar units are preset to a certain amount, such as $1, making tipping easy. Nonprofits also use the units, like the L.G.B.T. Center, which has them set to higher dollar amounts.

After serving as DipJar’s C.E.O. for six years, he passed the reins and took the plunge into political activism. More could be done, he felt, to help “close the gap” the counterpersons were experiencing.

“What the baristas needed was a $15 minimum wage” and more affordable housing, among other things, he noted.

Also spurring him into politics was the 2016 election and Donald Trump. He initally worked with Flippable, a group working to turn red states to blue, as a strategic adviser.

Next he managed a congressional campaign in 2018 in the Southern Tier of New York, in a red district, as part of the effort to take back the House.

Kessler then worked as a voter protection director in Maine in 2020.

Mixed in with this, he had been appointed to Greenwich Village’s Community Board 2, serving on it for all of 2019. He then took a break to do political work, but rejoined the board last year.

He currently is campaigning full time. Glick recently took a dig at him, asking if he had a job while noting that she can’t campaign as much in the district because she’s working four days a week in Albany.

Kessler’s top three campaign issues are housing, use of the streets / transit and rethinking public safety.

During the interview, he became particularly passionate when speaking about housing, noting it’s one of the issues he has been “centering.” He unabashedly fully endorses the Open New York platform. Like Open New York, he has one answer for New York City’s housing issues: “Housing abundance.”

“As progressives, we talk about housing as a human right,” he said. “Progressives like AOC are advocating for housing abundance as a solution.”

“I think evidence is very clear that building more housing, both market-rate and affordable, ultimately lowers prices for everyone,” he said, echoing the Open New York line. “It makes the city more affordable for everyone and takes off the pressure of displacement in other areas. We have built a million fewer units in the last 50 years than the proceeding 50 years, and that’s a supply crisis. We need more housing of all types.”

Kessler’s position on housing puts him directly at odds with C.B. 2 on some high-profile land-use struggles within the district, including the fate of the Elizabeth Street Garden and the Soho/Noho rezoning.

On the former, he supports the Haven Green senior affordable housing project slated for the garden, describing the choice as “the values of a semi-public garden versus an all-affordable development for low-income seniors.”

Kessler said the city’s plan for the Little Italy green oasis was on the agenda at his first C.B. 2 meeting as a member in 2019, and that he then went by Elizabeth Street to check out the garden the following weekend: “I wasn’t able to get in, it was closed,” he said.

The community board is firmly on record in support of saving the garden, but Kessler backs the housing plan.

“I think we need a tremendous amount of more housing, especially for people who are vulnerable — low-income housing,” he said. “I completely apprecaite the preferences of the people that want to save the garden. But I think that housing for low-income seniors is something we desperately need more of.”

Kessler was not serving on C.B. 2 when it voted on the Soho/Noho rezoning. But unlike the board and most of the Soho/Noho residential community, which overwhelmingly opposed the contentious scheme, he strongly supports it.

“I think the key aspect of the Soho/Noho rezoning was legalizing more housing density in a high-opporutnity, high-transit area of the city,” he said.

“We need to be much bolder, we need to be much more energetic,” he said, regarding housing. “This is a real crisis that has tremendous consequences in terms of people being priced out of the city, priced out of their homes and ending up in shelters or on the street, having to live farther away from their jobs and having to drive more and creating more carbon emissions.”

Kessler’s second issue is, as he put it, “streetscape and transit,” or as he said, “the need to address the asymmetry between car dominance of the streets and alternative modes of transit that are more sustainable and more equitable.

“We have 19,000 miles of car lanes in New York City and 544 miles of protected bike lanes,” he said. “And so it is just not safe to use alterantive modes of transportation, and it’s also not safe to be a pedestrian. Last year was the most unsafe year of the Vision Zero era.”

Asked if he considers on-street parking “free car storage,” he said yes — and that the city has too much of it.

“The parking spaces equate to 12 Central Parks, which is a mind-boggling statistic,” he said. “We know that right now we’re inducing car usage. When we have millions of free parking spaces, we are subsidizing car usage and making it more attractive. When we have 19,000 miles of car lanes, we are making driving more attractive. Ninety-four percent of people in this district do not commute by car.”

“I think the 14th St. busway has been amazing,” he said. “It’s incredibly successful.”

Asked where more busways should be added in C.B. 2, he said, “I hesitate to list the streets but I think we need to think about how we can replicate that success.”

He would like to see more parking spaces used for things like trash containerization and outdoor dining. The interview was the day after state Supreme Court Justice Frank Nervo ruled in favor of a lawsuit against the city’s outdoor dining program, arguing it must undergo a proper environmental review. However, Kessler is a big fan of the program.

“To me, it’s been a resounding success and has supported all of these local businesses, the 100,000 service workers they emply, the kind of people I started DipJar to help,” he said.

He conceded that, in some cases, accessibility to the dining sheds and the structure of the sheds themselves could be improved. However, he stressed of the pandemic emergency-inspired program, “We need to preserve it… . It’s so popular.”

Glick, on the other hand, has been outspokenly critical of the initiative, saying it must be reined in. Again, Kessler is at odds with the local community board on which he serves, which, like the majority of the city’s community boards, voted against making Open Restaurants permanent.

His third main campaign issue is public safety — or more accurately, how it can be reimagined.

“A carceral, punitive approach to society does not serve the public safety and, in fact, further victimizes marginalized communities,” he said. “I want to see the city go further in addressing the scourge of overpolicing and mass incarceration.”

One thing he doesn’t support is any weakening of the bail reform enacted by Albany.

“There are many more steps we must take to make our neighborhoods safer, starting with the bold investments in housing, healthcare and jobs proven to reduce violent crime,” he said. “One step that will not help is rolling back bail reform. All evidence confirms that it is unrelated to rising crime nationwide during the pandemic — and that more pretrial detention leads to more violence, not less. Any elected official staying on the sidelines of this conversation — rather than making a clear case against criminalizing poverty rather than criminality — is failing to live up to any progressivism they might claim.”

Glick was the first openly gay or lesbian member elected to the state Legislature when she won election in 1991. Asked if he respected Glick as a trailblazer and the work she has done, Kessler said yes, but that now it’s “time to do more.”

“I’m a gay man,” he said. “The fact that she was a pioneer in the Legislature is something I will always appreciate. I think the question today is what are we doing to advocate for the most marginalized members of society, whether that’s sex workers’ decriminalization or truly addressing housing affordability. Forty percent of homeless youth are L.G.B.T.Q.”

Kessler noted that, after Democrats won control of the state Senate in 2018, “I saw a new class of progressives come in and demand bolder vision. It led to lots of changes.

“The Assembly is now the place were bold progressive policies stall out,” he charged. “We need new energy and bolder vision in the Assembly.”

Kessler is also endorsed by the Working Families Party and the Jim Owles Liberal Democratic Club, among others. Transit guru Charles Komanoff also is backing Kessler and is throwing him a fundraiser at his Tribeca loft on Wed., May 10.

“On implementing congestion pricing, Glick is tepid, at best,” Komanoff said in an invite for the event. “Ryder is all-in on this dynamic policy to dethrone King Car and make our streets safer and our transit better.”

Unlike many young political challengers, though, Kessler is not endorsed by the Democratic Socialists of America. It wasn’t exactly clear why and Kessler’s campaign did not give a reason, but one Kessler supporter cited D.S.A.’s anti-Israel stance.

A member of the Hudson River Park Friends, an advocacy and fundraising group for the West Side waterfront park, who requested anonymyity, said she supports Kessler. Glick, taking a stand as the defender of the waterfront, has generally opposed big commerical development plans in the park, to the chagrin of the Friends.

“Eventually, Pier 40’s going to come back to the front burner,” the activist noted.

She clearly feels Kessler, if elected, would be more amenable than Glick to the Friends’ position on the waterfront park.