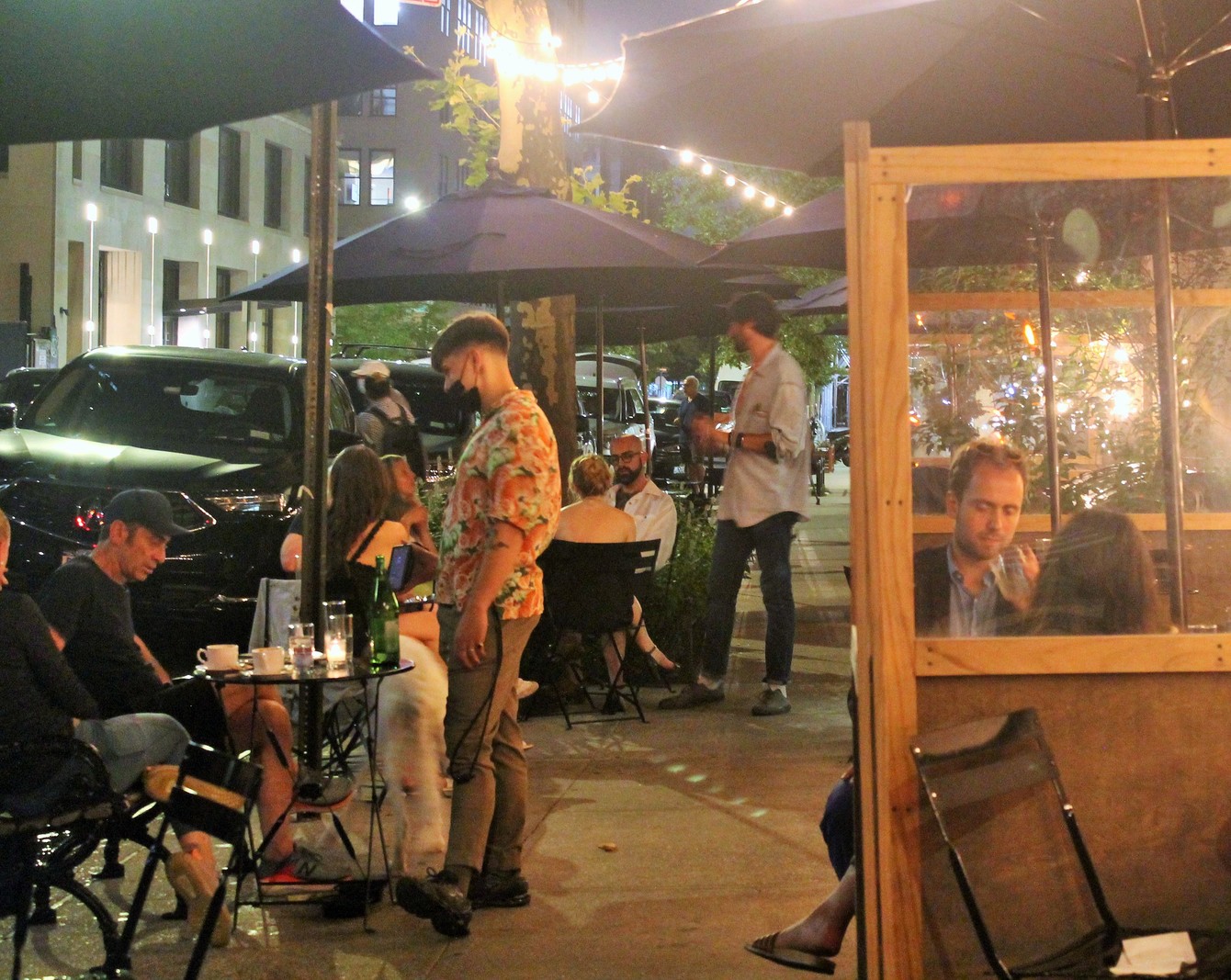 At a big Community Board 2 public hearing in July on the city's plans for sidewalk cafes and outdoor dining sheds, one speaker noted that agency officials needed look no further than right down the block from the meeting venue where Hudson Clearwater restaurant was seemingly taking up an excessive amount of sidewalk space. (Photo by The Village Sun)

BY LINCOLN ANDERSON | Community Board 2 isn’t taking any shed — at least not without proper public review and input.

Its members voted nearly unanimously last week — with just one “no” vote and one abstention — at their monthly full-board meeting to recommend denial of what they slammed as the mayor’s “one-size-fits-all” outdoor dining program.

The board’s resolution on the issue pans what it calls the “rushed attempt” to overhaul long-standing regulations on sidewalk cafes, plus throw thousands of roadway dining sheds into the mix.

“Manhattan Community Board 2 joins the growing number of community boards around the city that are recommending denial of Mayor de Blasio’s rushed attempt, in his final days in office, to remove all locational prohibitions for sidewalk cafes and create a new Permanent Open Restaurants (POR) program citywide that will make permanent changes to our city’s streetscape, based entirely on an emergency plan whose goal was to temporarily help one industry during an unprecedented global pandemic,” the resolution states.

Before the board voted on the issue, Assemblymember Deborah Glick weighed in.

“I think the loss of community input in a zoning text change is unacceptable,” she declared, “[as is] the seizure of public property by one industry.”

Local residents who testified during the meeting’s public session complained about how the Open Restaurants program has upended their lives.

One woman said the incessant din from the outdoor sheds is causing “psychological harm.” She lamented that when she’s at home now, even with the windows closed, it feels “like living in a restaurant.”

Another man, who lives on the ground floor, said he fears the rats that the sheds attract.

“I’m not able to open up the window because I’m afraid the rats will get in and attack my dog,” he said.

The board’s detailed and carefully crafted, seven-page resolution cites numerous shortcomings and flaws in the city’s plan, as C.B. 2 sees it.

With just three months left in Mayor de Blasio’s final term, the city is seeking to overhaul the existing regulations governing sidewalk cafes, basically by completely stripping them out of the city’s zoning resolution. Under the proposed “text change,” the Department of Transportation would assume oversight of sidewalk cafes, replacing the Department of Consumer and Worker Protection (formerly Consumer Affairs) in this role, plus would oversee the new roadway dining sheds.

Also, under the change, sidewalk cafes could now be located anywhere in the city — including attached to bars and restaurants in grandfathered commercial properties on residentially zoned side streets, which currently don’t allow sidewalk cafes.

C.B. 2 noted that it is also opposed to “wide, sweeping, permanent changes to the streetscape…without consideration of the best use” of the space — namely, that other uses and needs, like green space, pedestrian access and other types of businesses are all being treated as secondary to the push for roadway dining sheds and sidewalk cafes without limits.

Safety is another serious factor being overlooked, the board said.

“The mayor utterly disregards critical public safety impacts of roadway cafes and equity issues for residents and businesses during [his final term in office], all for the benefits of one single industry,” the resolution reads. “City streets are the mayor’s number one priority under Vision Zero, and his careless proposal of a citywide program [comes] at a time when the number of traffic deaths increased 30 percent in 2021 from traffic-related fatalities — the most deaths on city streets since 2014.”

Monday evening, a garbage truck dragged an outdoor shed on Sixth Ave. in the Village for about 10 feet — with a diner inside of it. Luckily the person was unhurt.

The board’s resolution is an extended laundry list of criticisms of the mayor’s plan. For example, the board notes disapprovingly, the text change would allow the expansion of “full-size sidewalk cafes” on streets currently limited to small sidewalk cafes.

The current regulations on sidewalk cafes were “crafted over decades,” the C.B. 2 resolution notes, adding that this zoning framework “has produced a successful balance between C.B. 2’s commercial and heavily residential uses and [provided] critical protections for residents.”

The board panned the idea of D.O.T. replacing D.C.W.P. as the regulatory agency for sidewalk cafes and, especially, outdoor dining sheds, noting, “D.O.T.’s low level of enforcement during the temporary [Open Restaurants] program and the lack of accompanying details regarding the size of its proposed ‘inspection force’ adds to our doubts. To do an adequate job, D.O.T. would need stronger enforcement tools than ‘education.’”

Specifically regarding the C.B. 2 district, the community board said the area needs to be assessed individually — both in terms of its built fabric and its uses — not under a one-size-fits-all approach.

“Each community is different,” the resolution notes. “C.B. 2 is largely composed of mixed-use and residential neighborhoods. Our 100-to-200-year-old buildings were not built to mitigate the negative impacts of bars and restaurants… . C.B. 2 is home to the highest density of liquor licenses, sidewalk cafes and destination eating and drinking establishments in New York City. The density of liquor licenses has created and will continue to create quality of life impacts for our residents. Our district has an unusually high percentage of residential buildings with restaurants and bars on the ground floor.”

The resolution also cites a survey done by City Council Speaker Corey Johnson that found only 18 percent of Open Restaurants participants “were compliant with clear [sidewalk] path regulations,” adding that this “has had significant negative impacts on ADA [handicap] accessibility in C.B. 2.”

Also, 311 complaint calls about noise in Board 2 surged, doubling between last June and this June, coinciding with the launch of the Open Restaurants program, the board noted.

And there are the rats, or as the resolution puts it, “The C.B. 2 community is currently overwhelmed with vermin, which now live under the many roadbed dining structures, and trash, which further exacerbates the problem.”

The board is additionally concerned the Open Restaurants program would further fuel the growth of what it calls the area’s new “monoculture” juggernaut of bars and restaurants. In short, in the view of C.B. 2, Open Restaurants would have “anti-equity and anticompetitive repercussions” for local businesses.

“There will be,” the resolution warns, “further dislocation and replacement of neighborhood dry retail storefront businesses through tools such as lease incentives and buyouts of businesses which have served the local community’s needs for decades, such as delicatessens, dry cleaners, laundromats, hair salons, butchers, specialty markets, hardware, jewelry, book and other family-owned ‘mom and pop’ small businesses. … This privatization of public space will result in a less equitable business mix and confer a permanent benefit to landlords in the form of increased rents outlasting the currently ongoing pandemic.”

The board also flagged the glaring lack of almost any studies associated with the permanent Open Restaurants program, noting that C.B. 2, block associations, concerned citizens and Speaker Johnson’s Office “have filled this void by compiling statistics and doing their own studies.”

Johnson’s survey, for example, found that 93 percent of businesses participating in the Open Restaurants in his Council District 3 — which overlaps with the C.B. 2 board district — “are not compliant” with D.O.T. regulations.

In short, the board’s resolution notes, no studies have been done on the outdoor sheds and expanded sidewalk cafes in relation to, among other things, noise levels, the loss of parking on small businesses, traffic flow and vehicle speeds, adequate safe visibility near intersections, cyclists’ safety, an increase of vermin and emergency vehicles’ ability to respond to fires and accidents.

Speaking before the board voted on the resolution, Federica Sigel, chairperson of the Land Use and Housing Committee, noted, “There are 25 studies that we’re suggesting that they didn’t do.”

Serving across a bike lane

The board singled out as a particularly dangerous situation outdoor sheds that are separated from the curb by a bike lane.

“Allowing roadway cafes to exist across bike lanes severely impedes not only bicyclist safety, but also pedestrians and workers — a direct conflict with the mayor’s Vision Zero plan,” the resolution states. “Bicyclist deaths and pedestrian deaths are up 15 percent and 13.6 percent year over year.”

The board’s resolution concludes by strongly recommending, first, that the current decades-old sidewalk cafe regulations remain in the city’s zoning resolution, and, second, that D.O.T. and/or the Department of City Planning revise the environmental study for Open Restaurants so that if reflects the program’s impact on “severely affected community districts,” like C.B. 2, and that “greater attention be given to ADA accessibility, enforcement, noise, sanitation and socioeconomic issues [as in, impact on other types of businesses].”

Rocio Sanz, the owner of Tio Pepe, a Spanish restaurant on W. Fourth Street, was the board’s lone “no” vote on the resolution. The board’s staunchest pro-business member, she argued the resolution “goes way too far.”

“If it was not for outdoor dining,” she said, “my restaurant would have had to close its doors after 52 years. People like to sit outside. They prefer to sit outside due to concerns about COVID and who’s sitting next to you.”

At the same time, Sanz acknowledged that “upstairs neighbors might be inconvenienced” by the sheds.

In general, though, she said, the board is too hard on bars and restaurants when they apply for liquor licenses.

“Businesses know that Community Board 2 is against their survival,” she accused. “Most of the time, there are so many restrictions [in the board’s resolutions], you are really pinning us against the wall and preventing us from surviving.”

Janet Liff, another C.B. 2 member, abstained from voting. Liff is the vice chairperson of the board of directors of Transportation Alternatives, which supports the Open Streets and Open Restaurants programs as a way of “reclaiming streets from cars.”

“I know surveys have been done that show 79 percent of people in Manhattan like outdoor dining,” she said. “I feel like we’re throwing the baby out with the bathwater with this resolution.”

However, Bob Ely, the chairperson of one of the board’s Liquor Licensing committees, noted that almost all the people who have shown up at C.B. 2 meetings on the issue have opposed making Open Restaurants permanent and removing existing sidewalk cafe regulations.

At a big C.B. 2 meeting on the topic in July, more than 100 local residents turned out, shouting things like “Mardi Gras!” “Rats!” and “fire truck access!” The same scenario played out at C.B. 3 a week or so earlier. As one East Villager at that meeting told agency representatives, “The pandemic is over. You are rubbing salt in our wounds.”