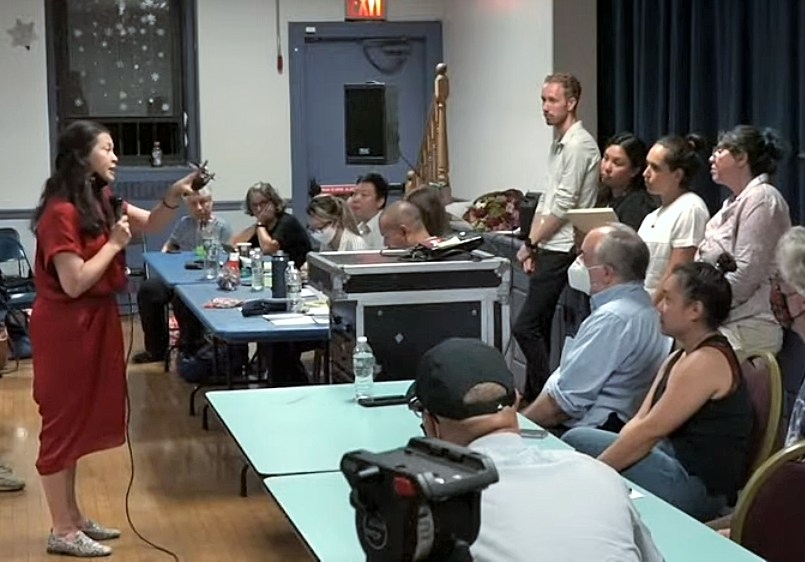 "This is exclusionary zoning": Diem Boyd of the LES Dwellers gave representatives from city agencies a piece of her mind about Open Restaurants at Tuesday's meeting.

East Siders are ‘mad as hell’ at meeting on Open Restaurants

That was the message sent loud and clear by East Village and Lower East Side residents to agency representatives at a Community Board 3 meeting Tuesday night on a proposed text amendment to the city’s Zoning Resolution to make the Open Restaurants program permanent.

Locals who packed the in-person meeting said the outdoor dining program has made their lives hell for the last year — and that they were mad as hell about it.

In fact, the raucous meeting at times seemed like one extended angry outburst, reminiscent of the iconic scene from the 1976 movie “Network” in which everyone yells, “I’m as mad as hell and I’m not gonna take this anymore!”

“The pandemic is over,” one woman said. “You are rubbing salt in our wounds.”

Another man said nights are now full of drunk revelers, guys harassing women and “mobs fighting each other from 2 in the morning till dawn.”

“I am tired of seeing my daughter in tears from not being able to sleep,” said Patrick Walsh.

As C.B. 3 member Lisa Kaplan explained, “The noise that many of us have been enduring for the last year has been really difficult. We have serious concerns about enforcement. We have small streets.”

“You can tell from this crowd, we do not want this,” one guy said when the floor was opened up to audience statements. “This is not Tampa. This is not Las Vegas! This is a residential neighborhood where people raise families.”

In making their presentation on the zoning amendment, agency officials talked about things like creating a “waiver for a 6-foot clear path” on sidewalks and preserving grandfathered restaurant and bar spaces on side streets.

But as a couple of audience members pointed out, there was one word that all the officials glaringly failed to mention in their presentation, “residents” — as in, taking into consideration the impact the Open Restaurants program is having on the quality of life, well-being and sanity of the people who actually live in the neighborhood.

Trevor Holland, a C.B. 3 member, said, “I can’t believe I’m sitting here listening to the physical structures of this [being described] without talking about the people. We come first — not the businesses. Businesses come after.”

David Crane, a veteran board member, pointed out that the street grid of the low-scale, tightly packed East Village and Lower East Side was laid out before cars even existed.

On top of that, Board 3 is one of the most saturated with liquor licenses in the entire city.

“This whole program is going to turn our area into an open-air alcohol zone,” Crane warned, to cheers from residents. “This is not right for our district, with large amounts of grandfathered storefronts and areas with heavy commercial use, like Hell Square.”

“We’re at the start of a really complex, multipronged approach,” an agency rep explained at one point.

“The Department of Transportation was never in the restaurant business before,” a D.O.T. staffer admitted.

“They shouldn’t be!” an audience member angrily barked.

D.O.T. is the lead agency on the Open Restaurants program since the dining sheds are located in the street.

However, radio deejay Delphine Blue, who lives on E. Sixth St., said D.O.T. being made the enforcement agency for outdoor dining is a recipe for disaster. She noted that she had been trying to get D.O.T. to fix a broken manhole on her street for two years. She also noted she has 14 outdoor dining sheds on her block.

“If they can’t fix a manhole cover, how are they going to do enforcement for all these restaurants?” she asked.

Residents bemoaned the transformation of their community into what might be dubbed “Bourbon Street with yurts.”

“I love my neighborhood! I love my neighborhood!” one man started yelling emotionally over and over. But he said he lives near Yuca Bar, and Seventh St. and Avenue A, and cannot take the constant noise anymore, noting it’s damaging his “mental health.” The audience applauded him supportiveley.

One woman, in an apparent reference to the Black Death of the 14th century, a bubonic plague spread by fleas piggybacking on rats, warned that the outdoor huts could breed a repeat.

“These sheds are rat traps!” she declared. “We are feeding rats. We just went through a pandemic — we are inviting the next pandemic with these sheds.”

There was no love shown for local elected officials, none of whom personally attended the heated meeting, though at least one of their aides did. Stuart Zamsky of the E. Fifth St. Block Association said Councilmember Carlina Rivera, state Senator Brad Hoylman and Assemblymember Harvey Epstein have been no help, which he claimed was due to their not having noisy street sheds outside of their homes.

“They’re insulated from it,” he charged.

Residents described being pushed to the brink by Open Restaurants.

“I have ‘Happy Birthday’ sung 20 times every hour,” one man said of the scene outside his window. He added that he was “almost decapitated” while riding his bike and hitting an electrical wire that was stretched across a bike lane to a dining shed.

One woman who works from home complained that she is constantly surrounded by noise while in her apartment, whether from the backyard area or — now, due to the outdoor sheds — from the street in front.

“There’s never a time when they’re not outside my window,” she said.

Laura Sewell, executive director of the East Village Community Coalition, similarly spoke about the right of people like writers and therapists who work from home to have a “habitable” environment.

One of the agency presenters had noted how, in some cases, under the proposed zoning changes, businesses would be able to get waivers if they lack sufficient sidewalk clearance. However, that set off one senior, who complained about how Open Restaurants has cramped the pavement.

“The program is giving a waiver…what the f—?” she spat, indignantly. “You’re not giving me a waiver so I can walk down the sidewalk!”

Three restaurant/bar operators spoke in favor of making Open Restaurants permanent. One said it makes the streets safer by adding light and activity to the streets at night.

Meghan Joye, a former C.B. 3 member who owns three local bars, said grandfathered side-street bars and restaurants should be required to close earlier. But she said that over “the last 50 years” — meaning since 1976 — the city has given over too much space to cars. She did not give any examples of what she meant by this.

“I think it’s time for the people to take back the streets, to some degree,” she said.

Similarly, Sam Zimmerman, who said he has lived on East Broadway for 10 years, also played up the anti-car agenda —plus took it a step further by slamming the group at the meeting as “unrepresentative.”

He said he thought it was “great” that parking spots that once held two cars are now places “for dozens of people to enjoy.”

“These meetings draw an unrepresentative sample of the city,” he claimed, noting that C.B. 3 has 165,000 people and that “many [of them] support Open Restaurants.”

But his remarks only got a couple of faint claps and most in the audience just did not want to hear it.

“I’m from here!” Zimmerman insisted as he returned to his seat.

However, Diem Boyd of the Lower East Side Dwellers, countered, as others have also argued, that Open Restaurants will only help perpetuate the city’s growing monoculture of bars and restaurants. Since other types of businesses cannot get space in the street and landlords can charge more for it, the thinking goes that landlords will mainly want to rent to restaurants.

“This is a real estate grab,” Boyd said. “They’re going to kick out that little pet store. This is not equity — this is exclusionary zoning. You’re actually giving one industry a monopoly on our streets.”

She was riffing on the phrase “inclusionary zoning,” which requires affordable apartments to be built in new housing construction.

“You mention ‘restaurants, restaurants,'” one frustrated man said, noting all the so-called restaurants “turn into bars.”

One woman described being besieged by a nonstop stream of birthday parties that often start in the morning. She recalled calling her mother in absolute despair about it one day.

“These are not local,” she said. “These are people driving in for birthday parties. They literally advertise it on the [restaurant’s] site. It’s ridiculous that I have one hour to listen to the birds chirp before the noise starts again.”

There certainly was no misreading the level of anger in the room about Open Restaurants. Yet, Zamsky, of the E. Fifth St. Block Association, expressed concern that the other 50-plus community boards around the city would not see the same level of outrage during their turn in the public review of the zoning text amendment. He thus suggested that East Siders and Lower East Siders fan out to these other meetings to help get the message out.

At the end of the meeting, Michelle Kuppersmith, the chairperson of the C.B. 3 State Liquor Authority Committee, basically scolded the volatile audience for being abusive of the agency officials who came to present the city’s plan. But as the residents made clear, they feel it is they who have been abused — by the Open Restaurants program.