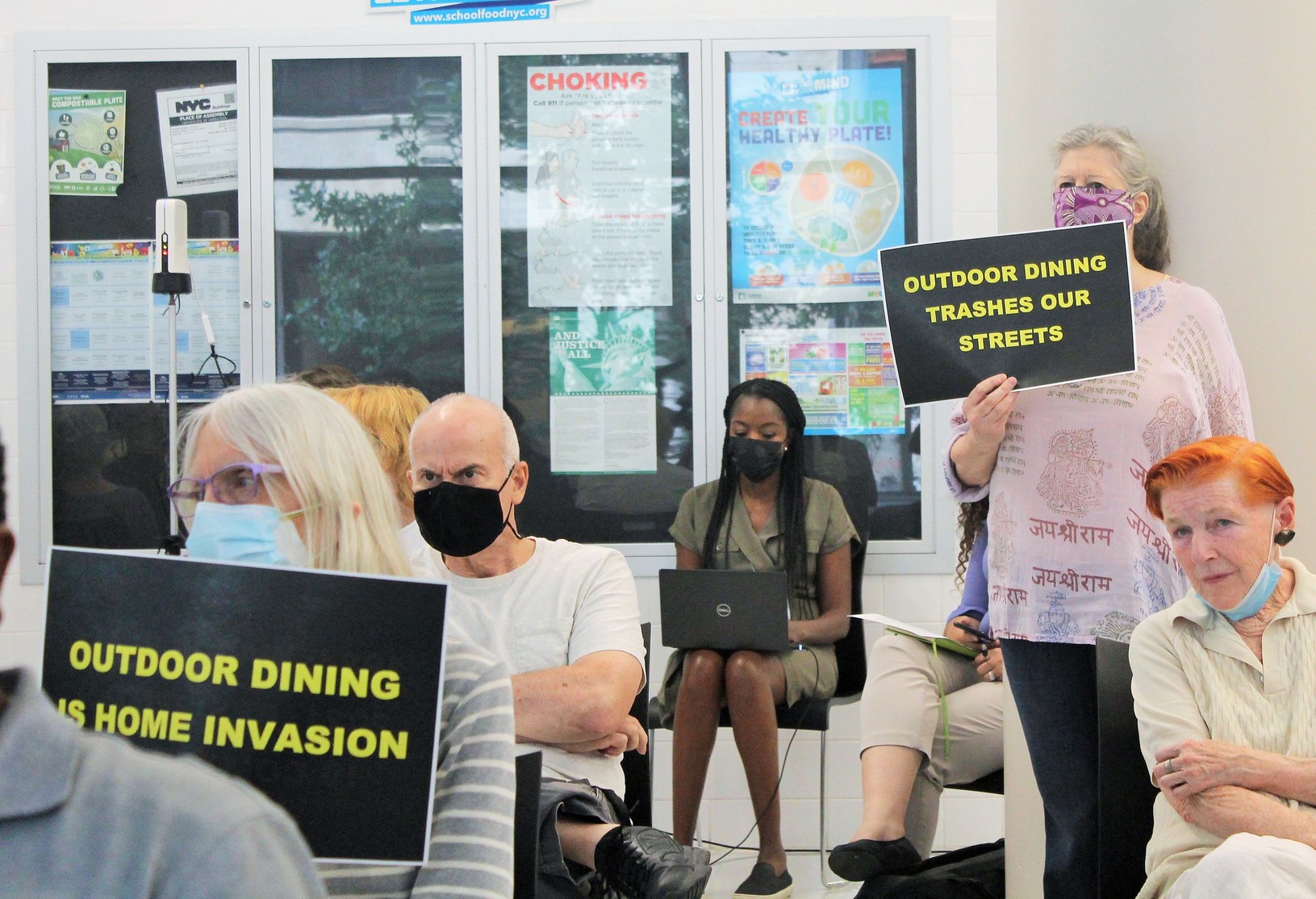 Villagers, worn down from a year of living with the Open Restaurants outdoor-dining program, came armed with protest signs. (Photo by The Village Sun)

Villagers dish out scorn for Open Restaurants at C.B. 2 meeting

BY LINCOLN ANDERSON | City Hall and the restaurant and bar industry have hailed the Open Restaurants program as a critical lifesaver and a way to, in the pervasive pandemic catchphrase, “build back stronger.”

But for many Greenwich Village residents, Open Restaurants has been a relentless onslaught on their quality of life, turning the historic neighborhood they once knew upside down. So it was no surprise that a Community Board 2 meeting on Mon., July 19, on the plan to make the scheme permanent, in turn, saw an onslaught of angry criticism.

The meeting was frequently interrupted by shouts from the audience of more than 100 people — “Mardi Gras!” “rats!” “fire truck access!”

The 12 Chairs Cafe, on MacDougal St., was cited as a poster child for how the city’s restaurant industry has exploded under the pandemic emergency roadway-dining program, as speakers scoffed that the place should now be known as “36 Chairs” or “56 Chairs.”

A local woman complained of “rats collecting chicken bones” left scattered on the street and their moving them from one outdoor dining shed to another. A man lamented about having to listen to “‘Happy Birthday’ four times an hour.”

People held up black signs with fluorescent-yellow writing with slogans like, “OUTDOOR DINING IS HOME INVASION.”

A Charles St. senior who said he had fallen down onto his hands and knees because a sidewalk near his place was so jammed with dining activity seethed at the young planners presenting the city’s proposal at the meeting to “listen to your elders!”

Locals testified about mornings of sidewalks full of broken glass and reeking urine and nights full of amplified music and “the tuba.”

In all, 55 members of the public testified, with all but about four of them strongly opposed to making Open Restaurants permanent. Among those in favor were two local restaurateurs and Maria Diaz, the head of the Greenwich Village-Chelsea Chamber of Commerce, who albeit admitted the program needs some fine-tuning.

David Gruber, a former chairperson of Community Board 2, summed up the feelings of many in the meeting venue at Middle School 297, at 75 Morton St., in his remarks.

“Everybody in this room wanted to help restaurants that were suffering [during the pandemic],” he said. “But now…this is one of the most poorly thought-out programs I have ever seen.”

Gruber, like others, said Open Restaurants simply cannot be a one-size-fits-all, since its impact on places like the Village — which has small, narrow streets, yet is jam-packed with restaurants and bars — is so much heavier.

“It’s never been explained to us why this [program] doesn’t end when the pandemic is over,” he stressed, as the audience erupted in applause. “We have no confidence that the Department of Transportation can or will enforce anything. You have restaurants with 20 feet of sidewalk frontage with 80 seats in front. It’s like the manifest destiny of the restaurants.

“Another year to get the restaurants on their feet, fine,” Gruber offered. “But it has to end. It has to sunset.”

The C.B. 2 meeting was part of the public-review process for a zoning text amendment that is required to make Open Restaurants permanent. Agency representatives are currently making the rounds of the city’s 59 community boards, giving them each a presentation of the plan and explaining why the city thinks outdoor dining in the streets should continue. Two weeks ago, at the meeting for C.B. 3, East Villagers and Lower East Siders similarly overwhelmingly told the city officials that they feel under assault by Open Restaurants and desperately want the program to end.

According to the city, the current situation with Open Restaurants would remain until late 2022 or early 2023, after which a permanent program would be put into place. C.B. 2 will not issue a resolution or vote on the issue until September, said Frederica Sigel, the chairperson of the board’s Land Use Committee. The committee may have another hearing on the issue in August or September, she added.

Currently, 11,000 restaurants across the city are participating in the roadway dining scheme.

Judy Chang, a director of special projects at the city’s Department of Transportation, extolled the program, saying it has added “incredible vitality” to the city and provided “a beacon of hope” to hard-hit eateries during the pandemic. She admitted, though, that creating the scheme had been a rushed process and that, for example, there have been issues with adequate “turning radius” on the streets for emergency vehicles due to the proliferation of the outdoor sheds.

“The program has been a massive success,” she declared, sparking a wave of derisive boos from the audience.

Chang noted that the city is proposing that Open Restaurants not happen during the winter, with some exceptions, under the permanent program. However, this coming winter, outdoor dining would be allowed, she said.

“We are also working with a City Council that strongly supports the program,” she noted.

Similar to last week’s C.B. 3 meeting, no local politicians showed up at the hot-ticket Village hearing, though some did send aides. Assemblymember Deborah Glick did tweet concerns about Open Restaurants.

Ben Huff, a senior project manager at D.O.T., explained that the zoning text amendment would remove any regulations currently restricting where sidewalk cafes can be located in New York City.

“Mardi Gras!” someone in the audience called out.

Huff noted that, up until COVID, “zoning served as a gatekeeper for where sidewalk cafes could be.”

“Yay!” a couple of people shouted out in favor of keeping a gatekeeper.

Currently, rules governing sidewalk cafes have been totally suspended due to the pandemic-inspired Open Restaurants program.

Normally, zoning does not allow restaurants in residential areas, Huff noted. However, as he explained, 2,900 eateries around the city have been grandfathered to allow them to keep operating in residentially zoned spots, with 1,000 of those places now participating in Open Restaurants.

In addition, some areas that normally do not allow sidewalk cafes include Eighth St. — whose sidewalks are too narrow — and Soho and Noho, due to their special zoning. But, again, all these rules on outdoor dining are out the window right now due to the pandemic — and could remain so, if the city’s plan goes through.

When Huff stated the roadway yurts are offering “some of the best dining in the world,” it was met by shouts of “Rats! Rats!”

He also claimed that many residents actually want sidewalk cafes on their block but that, traditionally, the application process has been a hassle.

“This proposal would eliminate that burden,” he said, his remarks again met by mocking laughter.

“How many inspectors do you have?” someone called out. D.O.T. is supposed to be leading the enforcement for Open Restaurants, but locals say they have seen none.

Ed Pincar, D.O.T. Manhattan borough commissioner, told the meeting that, under the permanent plan, sidewalk cafes would be reviewed by local community boards. On the other hand, though, he said, “The current thinking is not to have the roadway seating go through the community board.”

That was just what local residents did not want to hear, sparking another round of outraged boos and Bronx cheers.

As for shed enforcement, Pincar assured the skeptical crowd, “We expect to get a significant amount of new resources.”

Carolyn Grossman, the Department of City Planning’s director of regional planning, said, “[Once we get] out of the emergency, we expect many of the restaurants not to use the [outdoor dining] program.”

“Oh, come on! Jesus Christ!” an audience member blurted out in disbelief.

Carter Booth, the immediate past C.B. 2 chairperson, agreed with him.

“It’s cheaper to get more seating outside,” Booth told the agency reps. “When you say places won’t want to participate, I find that hard to imagine.”

Jeannine Kiely, the current Board 2 chairperson, asked the reps which councilmember would be sponsoring the legislation to make Open Restaurants permanent.

“I don’t think we’re ready to reveal any specifics,” Grossman answered, though adding that D.O.T. has been “speaking with the City Council.”

That answer did not reassure Sigel, the Land Use Committee chairperson.

“How do you expect us to recommend either way on this when we don’t understand the rules of the game?” she asked.

Stu Waldman, a longtime Bedford St. resident, expressed the indignation of his fellow Villagers in the room when he called on the city reps to cut the crap and stop making “dubious claims that even Donald Trump’s lawyers would laugh at.”

“The mayor wants Open Restaurants to be some sort of legacy, like New Orleans,” he scoffed. “You work for us! So tear up that document and do your job. Do it with integrity!”