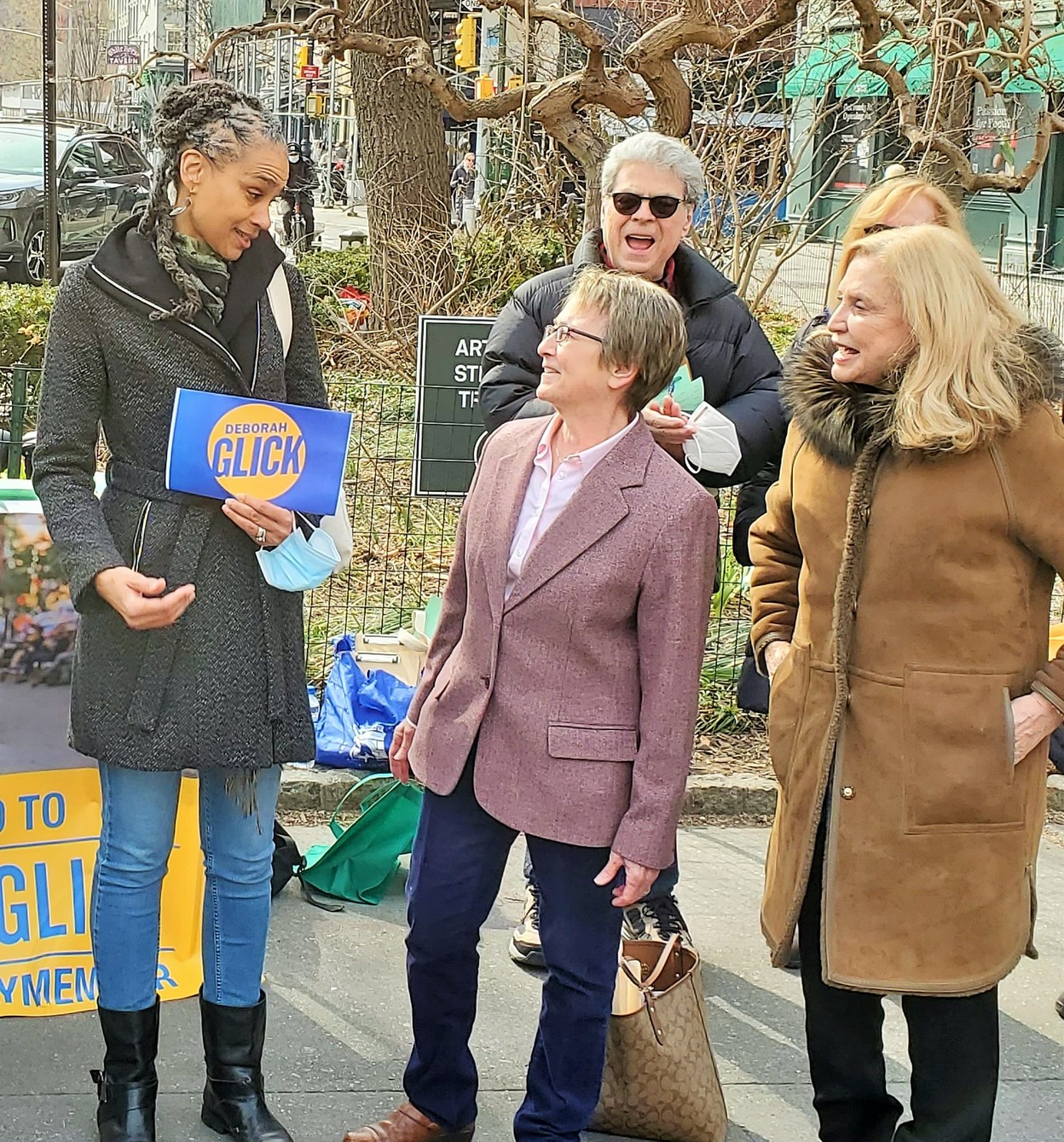 Wiley was a front-runner in last June’s Democratic primary election, campaigning to the left of Eric Adams. After ballots were cast, she was initially in second place, with around 22 percent of the vote to Adams’s 31 percent. But by the seventh round of ranked-choice voting, she fell to the third spot, with Kathryn Garcia finishing second.

Speaking Saturday, the charismatic Wiley praised the veteran assemblymember for being a leader on progressive issues throughout her career, as well as, more recently, during the depths of the pandemic.

Wiley prefaced her remarks by calling Greenwich Village one of her favorite places in the city, noting it’s “one of the most progressive, activist neighborhoods, actually holding it down for the whole city on critically important issues that we need in all our communities.”

In her endorsement, she said, “I especially want to say thank you to Deborah Glick, who has been a fierce leader for years, on everything from women’s rights, protecting our ability to protect our own bodies, from making sure that L.G.B.T.Q. issues and antidiscrimination exists as a form of defense to what can be wrong for so many of our people, to protecting our environment, to also just taking care of all of us during COVID.”

In addition, she praised Glick as a champion of both tenant rights and small businesses’ survival.

I’m so incredibly proud to be endorsed by civil rights activist and progressive champion @mayawiley! Thank you also to @villagedems, @DowntownWomen, and everyone else who joined us for our petitioning launch at the Abingdon Square greenmarket this morning! pic.twitter.com/DUa7u8uV13

Also throwing her support behind the assemblymember was Congressmember Carolyn Maloney.

“She’s a leader in so many ways — and, really, she gets stuff done,” she stressed of Glick.

State Senator Brad Hoylman also attended the event and reaffirmed his support for Glick — and for strong women in politics, in general.

“It’s time for the men to get out of the way!” Hoylman declared as some in the crowd loudly shouted, “Yeah!”

Glick said she is psyched to be campaigning again.

“I am excited,” she said. “I have a passion for public service.”

However, she admitted that her responsibilities in the state Legislature require her to be in Albany much of the week right now. As a result, she said, she’s relying on her campaign staff to be out doing a lot of the fieldwork for the race.

At the same time, Glick took a dig at her challenger in the June Democratic primary election, Ryder Kessler.

“I’ve been spending four days a week in Albany,” she said, “while my opponent, I don’t think he he has a job.”

A spokesperson for Kessler did not respond to a question asking what the candidate currently does for work.

Kessler is currently a volunteer member of Community Board 2. According to his LinkedIn page, his most recent work experience was as “voting protection director” for the Maine Democratic Party from January 2020 to November 2020. Until June 2020, he worked at DipJar, a donations app that he co-founded 10 years ago, serving as its C.E.O. and chairperson.

The announcement of Glick’s endorsements coincided with the start of the petitioning drive to gather signatures of registered Democrats who live in the district. Candidates must collect a required number of valid signatures during the petitioning period in order to get on the ballot. Members of the Village Independent Democrats club were out in force getting “John Hancocks” for their fellow V.I.D. member Glick and the rest of their slate of endorsed candidates.

Tony Hoffmann, a former V.I.D. president, said it was a relief not to have to use alcohol spray, sanitary wipes and latex gloves when doing ballot petitioning this time around. However, he said, “out of an abundance of caution,” the club did forgo holding its traditional “Opening Petitioning Day Breakfast” that morning.

Hoffman said, in general, he is a fan of primary-election contests.

“I love the idea,” he said, though shrugging of Kessler, “He’s not exactly a household name. He’ll have to establish himself to be a credible candidate.

“I think campaigns are very healthy,” Hoffmann said. “I love primaries because — I’ve seen it over and over again — it forces elected officials to be responsive to the community.

“I’m glad [Congressmember] Jerry Nadler and Carolyn Maloney have primaries,” he added, “because it forces them to focus on their community.”