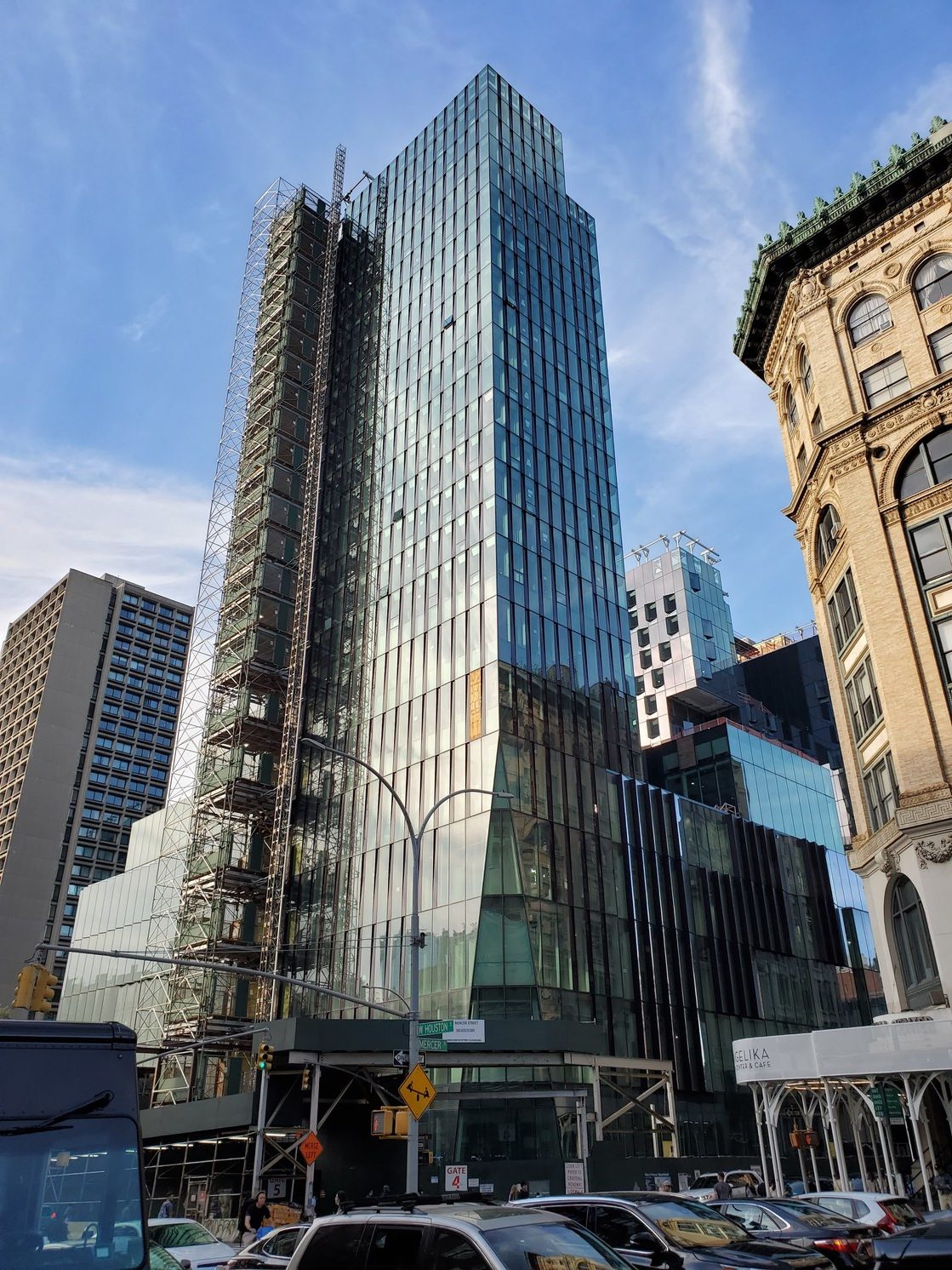 Local politicians want the Department of Buildings to hit N.Y.U.'s "Zipper Building" project, at Mercer and Houston Streets, with a stop-work order. (Photo by The Village Sun)

BY LINCOLN ANDERSON | The gargantuan, new New York University academic building soaring over the South Village at Mercer Street, once it’s completed, will include a gym, auditorium space, classrooms and faculty offices, among other things.

So far, though, there is one vital ingredient missing from the mix, according to local politicians, one that N.Y.U., in fact, had promised 10 years ago would be included — namely, a supermarket for the community.

As a result, on Feb. 28, a group of six local pols wrote to express their “deep concern” to Melanie La Rocca, the commissioner of the city’s Department of Buildings, and further to demand that a stop-work order be slapped on construction at the site until N.Y.U. complies with a 2012 special permit application for its construction plans on its two South Village superblocks.

That application from a decade ago called for a total of four new N.Y.U. buildings to be constructed on the university’s two superblocks, bounded by Houston and W. Third Streets and Mercer Street and LaGuardia Place. However, N.Y.U. in November told The Village Sun that it currently has no plans to build any more buildings after the 181 Mercer St. project, colloquially known — that is, at least until named after a big-bucks donor — as “The Zipper.”

Regarding “The Zipper,” the plans approved by the City Planning Commission back in 2012 stipulated that the building’s ground floor would “mostly consist of retail uses,” specifically, 29,000 square feet of such uses, as the politicians note in their letter.

However, as the six officials point out, there were “significant changes” between those initial plans and the building application that D.O.B. issued for the project in October 2018 that allowed the construction to start. In short, the whole building is now zoned for community facility use, with no commercial uses that would allow retail.

“…[I]n the zoning diagram approved by D.O.B. and consistent with what was filed in 2018, the entirety of the building will consist of community facility uses, most likely for academic purposes,” the politicos note. “As retail is a commercial use under zoning, this constitutes a significant departure from what was approved in 2012, and should not have been approved in 2018.”

The changes, the six wrote, have “…prompt[ed] concern from the community as well as elected officials as to the level of zoning enforcement at this site and the precedent this will set for developments.

“Given this violation, it is imperative that a stop-work order be placed at 181 Mercer St. until these zoning changes are corrected and N.Y.U. complies with the retail uses it proposed in 2012,” the pols declare in their letter, adding, “As the enforcement agency in this case, it is the responsibility of D.O.B. to ensure that work is halted, zoning plans are resubmitted, and that retail is committed to the ground floor of the new Zipper Building.”

The 100,000-square-foot building is slated for completion this fall.

The politicians’ letter does not actually include the word “supermarket.” However, their request to D.O.B. was prompted by concern over the fate of the Morton Williams supermarket, at the corner of Bleecker Street and LaGuardia Place, on N.Y.U.’s southern superblock.

As first reported by The Village Sun, the city’s School Construction Authority, in November, finally committed to a long-standing option to build a city school at the current supermarket site. Per the advocacy of Community Board 2, this school would be for special-needs students from across the city.

This new school would displace the current 14,500-square-foot supermarket, which is about half the size of the ground-floor retail space that the university had initially pledged to create at 181 Mercer St.

N.Y.U., however, is currently not making any provision within “The Zipper” for the supermarket, flouting the 2012 special permit application that stipulated ground-floor retail space in the building. That original stipulation was included specifically to provide a future home for the supermarket.

N.Y.U. had always envisioned some sort of development at the supermarket site — it was one of the four key sites in its superblocks megaplan — which is why it originally set aside part of 181 Mercer St. as a future supermarket space.

In an interview with The Village Sun, Councilmember Marte, who is taking the lead on the issue, slammed the disappearance of the promised retail space as “really serious.” He said the university apparently hoped it could quietly cut out the promised community amenity without any pushback.

“They didn’t expect anyone to put a spotlight into it,” he said, “but our office is taking really seriously a lot of these commitments that were made.”

He said he and his staff are looking into similar agreements that were made on a range of other projects in his district.

“N.Y.U. is building out that floor to be additional academic space,” he said. “It is a violation. We want to make sure that they make that floor available to Morton Williams.

“It is really serious,” he stressed. “What City Planning approves is what has to be built. Previously, that space was approved to be retail.”

Also speaking out on the issue is one of Marte’s predecessors, Alan Gerson, who represented District 1 in the City Council from 2002 to 2009. In addition, Gerson has lived on N.Y.U.’s southern superblock, just steps away from the Morton Williams for most of his life.

Recently speaking to The Village Sun, Gerson said it’s crucial to preserve the supermarket — and he offered some of his own ideas on how to do that.

For starters, he said, a task force should be created, composed of representatives from N.Y.U., the community and the supermarket, to work out solutions. He noted his mother, Sophie, had been on a similar task force years ago when the supermarket transitioned from Grand Union’s ownership to Morton Williams.

“There were concerns over hours, operation, prices, goods,” he recalled of that task force then. “There were always concerns that people were going to build up above the supermarket.”

Personally, Gerson envisions an option under which the special-needs school is actually sited, not at the current Morton Williams supermarket site, but inside the N.Y.U. Zipper Building.

“I have asked N.Y.U. to consider redesigning the space [inside 181 Mercer St.] to either accommodate a supermarket or to accommodate a school,” he said. “That would be a great outcome for the community and the university.

“I think it could be exciting for N.Y.U. to have a school on their campus that they have a relationship with,” he said.

Gerson stressed, “It would be a disaster to the quality of life of the community to lose the supermarket. We relied on those representations [in the 2012 special permit application], and N.Y.U. should stand by those representations. It is in their best interest, as well — their faculty will be outraged. Everyone can’t call FreshDirect all the time.

“Let’s not forget the workers,” he added of the supermarket’s 80 employees. “The workers helped get us through the pandemic. I was there.”

The former councilmember has been shopping at the supermarket since he was an adolescent.

“In the past, there was a great toy store and sporting goods store in the basement,” he recalled.

Gerson’s second option would be to perch the new school on top of the existing supermarket.

“But the bottom line,” he stressed, “is the supermarket must remain on the superblock and the school should be in the vicinity.”

The icing on the superblocks cake, so to speak, for Gerson, would be the creation of a project he has long championed, a folk music museum and educational center. He had formerly worked with the late Village Gate owner Art D’Lugoff and folk-singer great Odetta to try to make it happen, but it didn’t pan out, and so it’s not currently part of the superblocks scenario. Yet, Gerson still holds out hope the museum will happen, and, of course, that the “musical chairs”-like puzzle of the supermarket, the new special-needs school and “The Zipper” space can be resolved.

“With creativity and commitment — the two ‘C’’s — you can make it happen,” he assured.

Tying in with Gerson recalling fond memories of the former basement toy store, Carter Booth, a former Community Board 2 chairperson, said the idea of putting the supermarket belowground is an option he’s interested in learning more about. Piquing his interest, he said he had heard there is a lot of space underneath the supermarket, though that it’s currently just being used for storage.

N.Y.U. is currently saying there is a “two-year moratorium” on the Morton Williams supermarket having to vacate its current space.