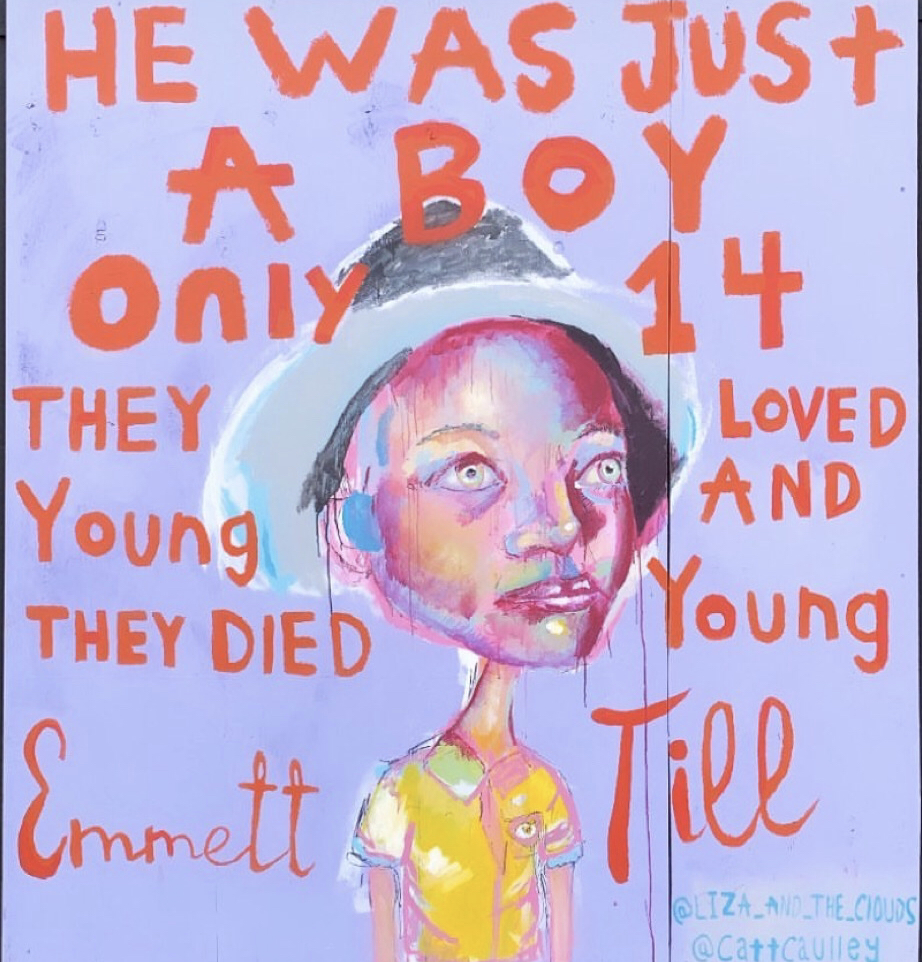 This mural of Emmett Till, by Catt Caulley, with help from Robert Blodgett painting the background, was stolen off the front of the 310 Bowery Bar. (Courtesy Sono Kuwayama)

BY LINCOLN ANDERSON | The artists’ murals on the boarded-up storefronts along the Bowery and in Soho were meant to turn a negative into a positive. They were done to beautify and enliven parts of Downtown that had been hard hit by rage and looting after the police-involved killing of George Floyd in Minneapolis.

Springing up in response to the looting, the barren plywood boards protected storefronts, plus covered the wide-open fronts of other boutiques that had already been breached. But the barriers also made the streets, already empty due to coronavirus, feel even more desolate.

Thus the idea was hatched for the colorful and inspirational murals.

By all accounts, the artists’ paintings on the plywood were a smashing success, no pun intended.

But now, that positive is turning back into a negative again amid a new spree of troubling actions. On the one hand, some store owners and landlords have taken possession of some of the murals and are “holding them hostage,” according to the artists. Meanwhile, apparent thieves, using a screw gun and a rental van, recently snatched several of the plywood paintings right off the storefronts and drove off with them.

As opposed to a street mural affixed to a brick wall or graffiti bubble letters on the side of a subway train, murals on plywood are easy to steal and highly portable: All you really need is a screw gun — and, if you are going any distance, a van helps.

Sono Kuwayama, who organized the Bringing Back Bowery murals effort, as well as the artists whose murals are being held or were stolen, are understandably outraged.

The outright theft of the murals by the organized pair of perps in the U-Haul van is perhaps easier to comprehend. Kuwayama and the artists, however, are particularly perturbed by the shop owners and building management companies who are stubbornly refusing to return the murals to their creators.

A case in point is the large “Love Power” mural, a collaboration by Scooter LaForge, James Rubio and Hitomi Nakamura, painted on the Bowery between Great Jones and Fourth Sts. According to Kuwayama, the owner of Côte À Coast — a “men’s lifestyle-concept” store whose window the plywood covered — took down the mural two weeks ago and won’t return it.

LaForge is “pretty well known and established” on the Downtown art scene, she noted.

Street art was admittedly a new experience for Kuwayama. Doing the project and painting out on the pavement, she found that she really enjoyed the community interaction aspect of it — but now she’s having to learn fast about its legal side.

“Anyone who has painted street murals says the artist has the copyright,” she said, adding that she’s being told by other artists that if there’s “no bill of sale,” the merchant or landlord would have a hard time proving ownership.

She conceded that, yes, the store owners or landlords do own the plywood. However, she said, “The artists own the paint and they own the image.”

Also, the store owners and landlords allowed the artists to paint the pieces in the first place, she added. Indeed, Kuwayama sent a letter around beforehand specifically requesting permission. But she said the Côte À Coast owner, David Wu, keeps trying to wriggle out of it.

“His reaction was, ‘Oh well, I never read your letter,’” Kuwayama said. “And he said I never said I was taking them back, which was true — it was implied.”

She dropped by the store personally to say she could come by and pick up the mural, but the owner reportedly told her, “It’s mine now.”

Wu did not immediately respond to a request for comment.

Meanwhile, Kuwayama reached out to all the other stores involved in the Bringing Back Bowery project — 40 murals were done, in all — and they all said they would let the artists keep their works.

“Everyone else was cool with it,” she said.

The “Love Power” mural, at around 11 feet by 8 feet, was “way bigger” than all the others, she noted.

Kuwayama is currently reaching out to Volunteer Lawyers for the Arts to get advice and help on the situation.

The artists are hoping to work with the pro bono lawyers, she said, “because we don’t have money.”

The hope was that the artists would exhibit the murals at a later date, selling them to raise funds for the community and for righteous causes.

“There’s all sorts of social-justice issues” that the murals’ sales could fund, she noted. “Part of it was going to go to the Bowery Mission — homeless issues, which will probably get worse by the extra unemployment being cut.”

Still upset over the “Love Power” mural kidnaping, Kuwayama was shocked again just a few days ago to find that two murals that had covered the windows of 310 Bowery Bar had been stolen. All that was left behind were screws scattered on the sidewalk.

Surveillance video from the bar shows a man and woman exit a U-Haul van, and the man — wearing a seemingly official-looking reflective vest and hard hat — then use a screw gun to remove the plywood murals. The woman, meanwhile, appears to act as a lookout. They load the murals into the van and drive off.

The stolen murals include an Emmett Till piece that Catt Caulley did with an assist by Robert Blodgett — Caulley did the portrait and words, Blodgett did the background — and a mural by de_zalv.

Kuwayama later found out from the super of 325 Bowery, about a block away, that another Blodgett mural was stolen from the outside of the Italian restaurant Bar Primi.

For its part, Soho hosted two separate plywood mural projects: Soho Social Impact, which mainly focused on Black Lives Matter themes, and Art to Heart, which largely featured messages of hope and love. Like Bringing Back Bowery, the Soho mural projects also have seen theft of artworks and disputes over ownership.

Artist Irena Kenny did a total of six murals, both in Soho and on the Bowery. Two of them, she’s currently fighting to get back. Another one, she has no clue where it is.

Her piece “Lady Liberty Can’t Breathe,” that was at 102 Greene St., in Soho, is missing.

“No idea if it was trashed, is being held for safekeeping — whatever that means — or was stolen, like so many others,” Kenny said.

Another of her murals, “Is My Daddy Next?” painted on the plywood covering Jamali Gallery, at 413 West Broadway, was removed by the gallery, along with a piece by fellow artist Kamila Zmrzla.

“The gallery took them down and was originally proposing to auction them off, with proceeds going to a charity of our choice,” Kenny said. “They no longer want to do the auction but are keeping the pieces safe for now.”

On the other hand, the two artists have heard scant word about their murals that covered 78 Thompson St. Kenny had one piece there, “We Are the Change We Seek,” along with another one by Zmrzla.

“They were taken down by Centurion management without including us,” said Kenny, who describes the murals as being “held hostage.”

“I feel really disheartened by the turn of events,” she said. “What started as a positive response to a very painful and difficult situation is now bringing up blatant disregard, entitlement and greed.”

Through a plea on its Web site, the Soho business improvement district, the Soho Broadway Initiative, is trying to help track down missing murals.

In the meantime, the superintendent for Bar Primi said, for the remaining murals on the restaurant’s windows, he’s going to put in “better screws” — probably with special heads, from the sound of it — that are harder to remove, Kuwayama said.

There are plywood murals still covering the Bowery Poetry Club, at 308 Bowery, which like other New York City entertainment venues, hasn’t been allowed to reopen yet. However, according to Kuwayama, the club’s proprietor, Bob Holman, feels the pieces there are safe and firmly attached.

“He was saying they have a lot of screws,” she said.

Holman and the 310 Bowery Bar owner have pored over the videotape of the murals theft, scouring it for possible clues.

Meanwhile, Kuwayama said a few days ago she e-mailed yet another appeal to Côte À Coast owner Wu to return the “Love Power” mural, but is still waiting to hear back.

She’s hoping the artwork’s message of love gets through to him and that he agrees to do the right thing.

“I think it’s up to the artists now,” she said. “I feel I’ve done all I can to help and to try to see if David Wu can understand that he is taking an artist’s work that doesn’t necessarily belong to him.”

She’s also awaiting word from Volunteer Lawyers for the Arts, hoping they will help sort things out.

The theft and “kidnaping” of some of the murals is a downer for Downtown art projects that were all about uplift during a moment of both local and national crisis.

“It’s such a wrong thing to do at a time like this,” Kuwayama said. “It’s a really awful, greedy thing to do.”