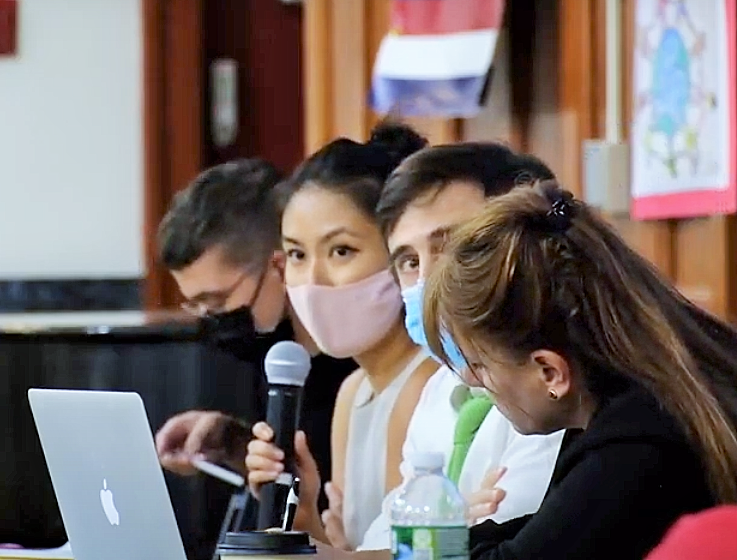 At a July 8 meeting on the Soho/Noho rezoning, a City Planning official cast a worried glance in the direction of a Downtown activist who had just shouted, "That's an insult!" after Sylvia Li, speaking on the mic, called the Community Alternative Zoning Plan "magical thinking" and, basically, a fraud.

BY LINCOLN ANDERSON | Updated July 12, 1:00 p.m.: There may be a heat wave going on, but things got even hotter in Soho and Noho last week after a senior City Planning official accused rezoning opponents of only pretending to care about affordable housing.

Outraged community activists are now demanding that the planner’s remarks be “denounced and repudiated” and that “appropriate action be taken” against the woman and two of her colleagues who were at a meeting last Thursday where the comments were made.

The flap overshadowed the fact that, the day before, Justice Arthur Engoron of State Supreme Court had ruled against a community lawsuit seeking to block the city’s Soho/Noho rezoning plan. The plaintiffs had argued that the city did not give Community Board 2 sufficient advance notice of its intention to launch the public review of the rezoning, plus was “muting” the plan’s critics by holding meetings on Zoom instead of in person.

Initially, Justice Engoron had said that “insufficient notice is the same as no notice.” But last Wednesday, he reversed himself and declared in a terse ruling that “a notification doesn’t have to be perfect.”

In an e-mail after the verdict, Sean Sweeney, the director of the Soho Alliance, said, “We still have several options available and will be discussing our next move with our attorney this week.”

Meanwhile, at the C.B. 2 meeting on the Soho/Noho rezoning last Thursday, which was held in person, Christopher Marte, the Democratic nominee for City Council District 1, declared he opposes the scheme since it would displace existing residents, particularly low-income ones in the rezoning’s Chinatown area.

But right after Marte spoke, Sylvia Li, a senior planner with the Department of City Planning, lashed out at the Community Alternative Zoning Plan for Soho and Noho, which was created by Village Preservation and is supported by a dozen local community groups. The alternative plan supports increasing affordable housing in the two Downtown districts — but, unlike Mayor de Blasio’s rezoning scheme, does not rely on market-rate development to do so.

Li told the meeting that the alternative zoning plan “encourages people to engage in magical thinking that is not rooted in reality… . We think that is not a plan that is motivated by a genuine concern for displacement,” she said, “or…desire to introduce more housing affordability.”

“What? That’s insulting!” Todd Fine, president of the Washington Street Advocacy Group, blurted out in the audience as Li spoke.

In response, the dozen groups have signed on to a joint letter to City Planning, Borough President Gale Brewer and City Councilmembers Margaret Chin, Carlina Rivera and Corey Johnson, demanding that Li’s statements be “denounced and repudiated” and that “appropriate action” be taken against her, as well as Edith-Hsu Chen, the Manhattan director of City Planning, and the department’s counsel, who were also at the meeting.

In an interview with The Village Sun, Andrew Berman, the executive director of Village Preservation, slammed Li’s comments as both “despicable” and “ironic.”

“What Sylvia Li said was pretty despicable,” he said. “Yet, what was even worse was that City Planning’s counsel and the director of its Manhattan office were sitting on the dais with Li and seemed to agree with what she said — certainly nobody criticized it. And she said she was speaking for the entire department, not just herself, which would have been bad enough.

“It’s incredibly ironic,” Berman said of Li’s diss. “The Department of City Planning has obscured from the beginning that its plan would impact the low-income community of Chinatown. We think that the rezoning would threaten and destroy a lot of affordable housing.”

In fact, Village Preservation’s analysis has shown that hundreds of low-income and affordable apartments, home to mainly Asian residents, would be at risk of demolition if the city’s plan is approved.

On the other hand, the opponents charge that the city’s proposal is rife with loopholes that would allow developers to avoid creating any affordable housing at all.

Meanwhile, Berman said, it’s not surprising that the Planning honcho would slam the alternative plan since “it doesn’t have any goodies and giveaways to the developers who want the mayor’s plan.”

According to Berman and his allies, the de Blasio rezoning would open the floodgates to “a massive upzoning,” with big-box stores, hotels, condos and offices, plus allow New York University to penetrate into the cachet-laden enclaves.

The Community Alternative Zoning Plan, on the other hand, calls for affordable housing to be built on open-air parking lots and on sites currently occupied by one-to-three-story buildings that do not have any residents, plus mandates that as many of the new units as possible be affordable.

“But that doesn’t create the windfall for developers that our mayor has promised,” Berman noted as to why Li and others are snubbing the alternative scenario.

The preservationist dubbed Li’s surprising words “psychological projection.” In fact, he said, it’s actually the city that does not care about displacement in trying to ram through the developer-coveted rezoning.

“It’s straight out of the Donald Trump playbook — saying we don’t care about displacement and affordable housing,” Berman scoffed.

He added that the planner’s remarks were insulting not only to Village Preservation, which spent weeks crafting the alternative rezoning proposal, but also to the groups supporting it.

“To cast aspersions on the motivations of nonprofit community groups that work for the residents of the neighborhood is despicable,” Berman said. “And for them to question that we care about neighbors being pushed out and the affordability of our neighborhoods is the height of hypocrisy and deflection.”

As for the motive behind the highly unusual public attack, Berman said, “I think they realize they have zero support in the neighborhood for this. So they want to try to invalidate the opinion of neighborhood residents — the ones who would be most affected by the plan.”

He added that Li’s remarks were also “insulting” to Marte, who is poised to become Lower Manhattan’s new councilmember if he beats two opponents, a Republican and an independent candidate, in the November general election.

As for what “appropriate action” should be taken against Li for her audacious rebuke of the community’s alternative plan, Berman did not offer specifics, though said, “but there are various steps” that could be considered.

Meanwhile, in an e-mail, the Soho Alliance’s Sweeney called Li’s remarks “slanderous” against the 12 groups that support the Community Alternative Zoning Plan.

“Sylvia Li — without any provocation — hurled perhaps the most contemptuous comments ever uttered by a government official at a community board meeting,” he fumed in an e-mail to the Soho Alliance’s listserv.

“Li self-righteously declared that we advocates, unlike her, ‘are not truly concerned about tenants rights,’ implying that groups like the Lower Manhattan Loft Tenants and New York City Loft Tenants are not ‘tenant advocates,’ ‘do not care about housing’ and had no ‘real concerns’ about displacement,” Sweeney said. “This is the same person who referred to Soho/Noho residents at a prior meeting as ‘relics.'”

The longtime Soho leader said Li has simply got to go.

“Ms. Li’s biased comments have poisoned this entire rezoning process,” he said, “and she should immediately be removed as team leader before she does more harm.”

In follow-up remarks to The Village Sun, Sweeney said of Li, “She has clear bias and animosity toward the very people and communities her agency is claiming they’re trying to help and she has shown her true colors.”

In addition to being incensed by the planner’s remarks, the rezoning opponents are also now questioning her links to real estate groups.

Li co-chairs P/PREP (Public-Private Real Estate Professionals). According to its Web site, P/PREP is a group of 700 professionals who work on public-private real estate and economic development projects, employed by a range of government agencies and leading real-estate development, consulting, law, finance and design firms.

On May 20, Li  took part in a “breakfast meeting” coordinated by WX, Inc.

Among the meeting participants was Olivia Moss, a principal at HR&A Associates, which describes itself as “an industry leader in providing comprehensive real-estate strategies to unlock value and create vibrant places.” Meanwhile, the rezoning opponents say Soho and Noho already are more than vibrant enough.

Li used a report by HR&A as her blueprint during the 2019 Envision Soho/Noho outreach meetings that many community members attended. The firm’s report focused on “Implications of Restrictions on Retail.”

According to the rezoning foes, Li also failed to mention that the report by her HR&A pals was paid for by 11 Soho/Noho property owners who want to remove these retail restrictions.

City Planning is now calling for retail of unlimited size and a 250 percent increase in the bulk and height of buildings in some parts of Soho/Noho.

Another participant at the May 20 breakfast meeting was Casey Martinez of United American Land. The outfit is one of the city’s largest real-estate developers, owning more than five-dozen large properties, with more than a dozen in Soho.

“With bedfellows like these, is it any wonder that Sylvia Li sullied the community’s attempts to preserve and protect our neighborhood?” Sweeney accused in his e-mail. “She should be immediately removed.”

Correction: The original version of this article stated that Sean Sweeney, the director of the Soho Alliance, had shouted, “That’s an insult!” after City Planning’s Sylvia Li had panned the Community Alternative Zoning Plan for Soho and Noho. In fact, it was Todd Fine, president of the Washington Street Advocacy Group.