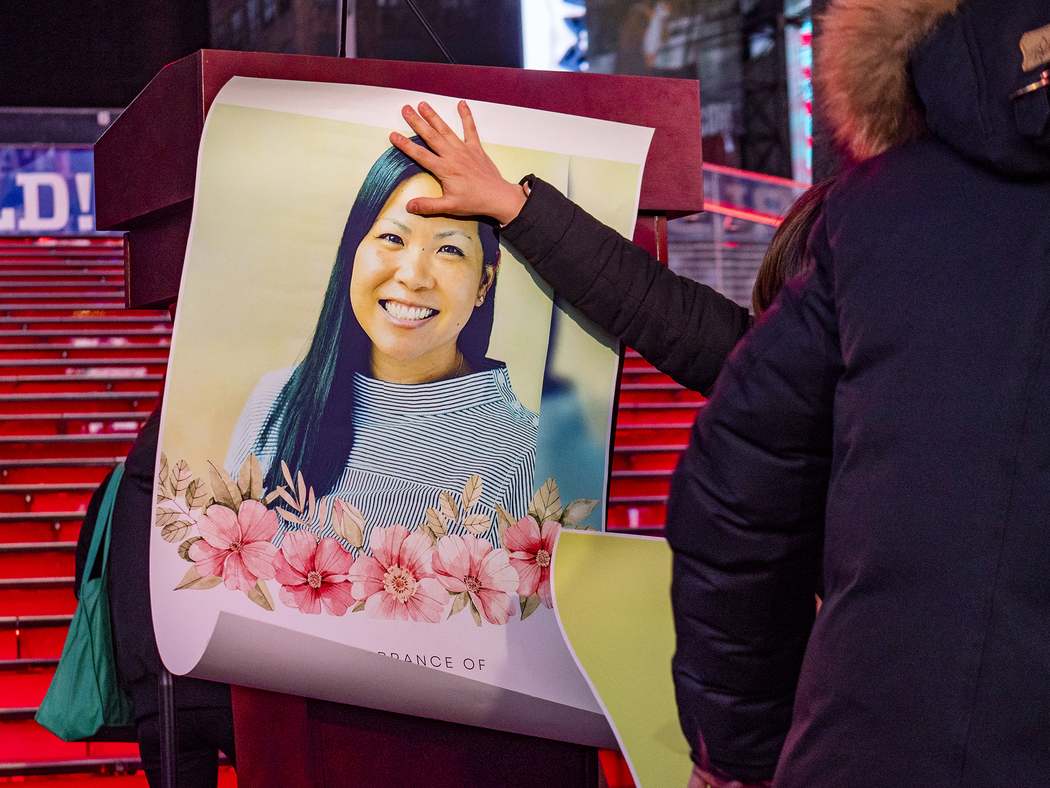 A poster of subway-shoving victim Michelle Alyssa Go at a memorial event for her on Jan. 18 in Times Square organized by Asians Fighting Injustice. (Photo by Milo Hess)

BY JONATHAN RUSSO | With the recent subway murder of Michelle Go, the city is on edge, once again, from the violence caused by the mentally ill and homeless.

In an effort to understand what is happening, the “broken windows” theory is making a comeback. As first espoused by sociologists James Wilson and George Kelling in a 1982 7,000-word Atlantic article, the theory proposed that visible small-scale social disorders — like graffiti, broken windows, turnstile jumping, public urination and other signs of lawlessness — fostered an environment for and indeed encouraged more serious violent crime.

In 1993, New York City mayor-elect Rudy Giuliani and his police commissioner William Bratton set out to fix this mess. Recently, Atlantic writer Alex Pareene documented his frustration with the quality of life plaguing his Brooklyn neighborhood and how depressing the city’s lack of response was.

As someone who had lived in Manhattan for a decade by 1982, the original theory made sense to me. The 1975 Daily News headline “Ford to City, Drop Dead” signified that America was going to leave its urban constituency to its own very limited devices. In 1982, the city felt ungovernable. These were the days of “Turn ’Em Loose Bruce,” when tabloid headlines screamed that judges were releasing career criminals to continue their crime sprees.

Around that time my apartment was broken into — apparently by a spider-man who shimmied up a drainpipe and entered a bathroom window. One night in the late ’70s I pulled an attempted rapist off a woman in the doorway of the building next door. My Tribeca street was basically a urinal for truckers.

As late as 1983, neighborhoods in the far West Village thought it necessary to hire security guards to stop disgruntled sex workers from drifting out of what was then truly the Meatpacking District and mugging us. One year later, Bernard Goetz, the milquetoast subway rider, would shoot four teenagers who were menacing him, or so he claimed. Many understood this action as vigilantism…always the last resort of those unprotected by official forces. Others, though, said Goetz went way too far, or wondered if his action had been premeditated.

However, from a humanitarian point of view, today it is far worse. Instead of broken windows, I am surrounded by broken lives. They are everywhere. They live in tents outside my building, in one of the “most desirable neighborhoods” in Manhattan — the Central Village off Fifth Ave. The other day, entering the subway early in the morning at the W. Fourth Street station, at least four homeless men were huddling under tarps and a few bent over and just wandering around.

It’s nearly impossible to find a subway car on the E train from its start in Queens that does not have one or more homeless sleeping on the seats. Most of the time, the trains and platforms are frequented by the clearly disturbed, who verbally express their distress. Their menace lies in their unpredictability.

The level of distress seems more profound, too. Some people wear rags and are as unwashed as you would imagine the lumpenproletariat were in Moscow circa 1914. These are not the formally passive “bums” I remember when the Bowery was the Bowery, but a far more clinically disturbed population. They are not just “down on their luck.”

This is the dark side of the city that newly elected Mayor Eric Adams inherits. Of course, the Meatpacking District is now filled with restaurants sporting $50 entrees and the Bowery has hotel rooms in the many hundreds with adjacent multimillion-dollar condos. So Adams is not inheriting a bankrupt city, a city without resources; he is inheriting a city unable or unwilling to help its desperate and growing underclass. Sooner or later, this failure is going to undermine all the glamour and glitter the mayor seems to enjoy in his role as “nightlife mayor.”

I have nothing against night owls; I am often one myself. However, in the bright light of day, it is time to look around and treat the underclass crisis with all the energy that the mayor seems to possess.

How did we get to this point? The answer is in a brilliant account of how we harmed so many by deinstitutionalizing them. Kurt Andersen’s 2017 “Fantasyland” gives a vivid account of centuries of delusional thinking by Americans. When Andersen gets to the ’70s, he exposes the intellectual justification for closing “mental hospitals.” I know his history is accurate because in 1970 I believed in this, too. Thomas Szatz (“The Myth of Mental Illness”), R.D. Laing (“The Divided Self,” “Knots”), Ken Kesey (“One Flew Over the Cuckoo’s Nest”) and Frederick Wiseman (“Titicut Follies”) had an enormous influence on me.

I was a psychology major at the time. These authors and documentarians convinced me society was incarcerating harmless “different drummers,” non-mainstream creatives, because they were not conforming to the dominant society’s view of “sane.” So, society closed the institutions and established halfway houses and “community-based” support residences. All of which were and are a total failure.

Those who were released ended up as we see them today: bedraggled, hungry, confused, terrified and living on the streets. Or worse, in the penal system’s jails. If I could, I would apologize to each and every one of them for believing the New Age nonsense that all would be fine if they were set free.

Those with severe mental health disorders need to be removed from the subways, the streets and the prisons. Yes, some of this is self-interest since I don’t want to see more people pushed onto the subway tracks or stabbed or assaulted by those in crisis. More profoundly, it is inhumane and thus seriously depressing to live in a city and state as rich as this one and live side by side with those so troubled, so lacking in the very basics of life. I don’t want to have to ignore people next to me with treatable medical conditions, like open sores and swollen feet, or those in the throes of schizophrenic episodes.

I am heartened that the governor and mayor have recently decided to address the crisis by coordinating social workers and the police to reach out to the homeless. However, unfortunately for some, the best place is going to be in an institutional setting. It’s time to acknowledge that reality.

Russo’s writing has appeared in the Huffington Post, Talking Points Memo, Worth Magazine, Real Clear Markets, The Observer and the Daily News. He hosts a podcast, “Out of the Box with Jonathan Russo.”